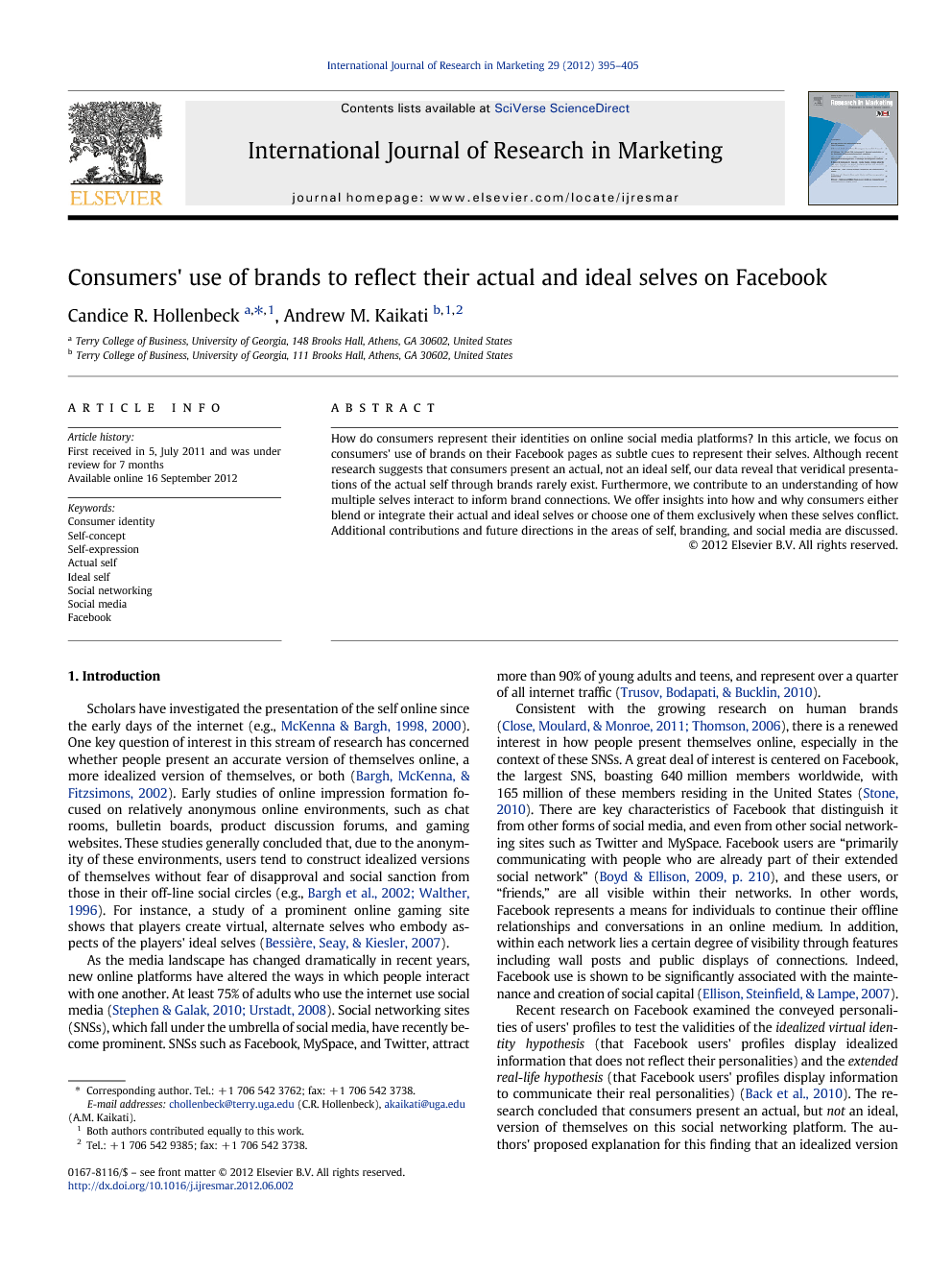 How do consumers represent their identities on online social media platforms? In this article, we focus on consumers' use of brands on their Facebook pages as subtle cues to represent their selves. Although recent research suggests that consumers present an actual, not an ideal self, our data reveal that veridical presentations of the actual self through brands rarely exist. Furthermore, we contribute to an understanding of how multiple selves interact to inform brand connections. We offer insights into how and why consumers either blend or integrate their actual and ideal selves or choose one of them exclusively when these selves conflict. Additional contributions and future directions in the areas of self, branding, and social media are discussed.

Individuals represent aspects of their selves to others in their online social networks. Even in the absence of the nonverbal cues that characterize offline communications, people use whatever information is available online to form impressions of others (Walther & Parks, 2002). In the context of Facebook, most prior impression formation research focuses on sociometric data regarding the user's “friends” (Tong et al., 2008 and Walther et al., 2008). Less research, however, is focused on impressions formed based on information posted directly by a user (for an exception, see Back et al., 2010). Importantly, the information that is directly created or posted by a Facebook user (e.g., brands “liked” by the user) can also be used to mold others' impressions of him or herself. Consumers are networked to other users on this platform, and within each network lies a certain degree of visibility through features including wall posts and public displays of connections. Indeed, the online environment allows for a transcendence of physical and material constraints, thus facilitating consumers' extensions of self, even in the absence of material possessions (Zhao & Belk, 2007). Whereas earlier research suggests that Facebook users' profiles reflect only the actual self (Back et al., 2010), our findings present evidence of the use of brands to express both the actual and ideal selves. Back et al.'s (2010) study of self-expression on Facebook was conducted at a relatively high level of inquiry, examining users' Facebook profiles as a whole. Our unique methodology and tighter focus on brands allow for a deeper understanding and discovery of more subtle ideal-self expressions that slipped “under the radar” in earlier research. Indeed, we find that most people edit their presented selves in some motivated way. Over half of our participants self-reported expressing the ideal self to a greater extent than the actual self in their linkages to brands. Furthermore, participants revealed two subcomponents of the ideal self: ideal self-representation and ideal self-presentation. Ideal self-representation involves an expansion of the actual self (self-enhancement), while ideal self-presentation is a limitation of the actual self (self-protection). Thus, we identify reflections of self in this novel context that appear to have gone undetected in prior work. An interesting finding of this research is that the ideal and actual selves often conflict on Facebook. Consequently, we contribute to the literature on how multiple selves interact to inform brand connections. Due to the virtual nature of Facebook as a unified platform for networking, consumers are forced to present a single persona to a wide range of acquaintances. In deciding how to express the self on Facebook, we find that participants' actual and ideals selves either blend (congruous) or conflict (incongruous). Users express their identities through brand linkages depending on the nature of the congruity (or lack thereof). When the identities are congruous, participants present either the actual or ideal self to a greater extent by linking with brands; however, aspects of both the actual and ideal exist. Therefore, we found evidence of a blending of the two identities. In other words, participants use a mix of brands representing both the actual and ideal selves, but typically more brands will represent either the actual or ideal self. When the identities are incongruous, participants take one of two routes in an effort to resolve the incongruity: linking with brands to enhance and protect the self-concept (i.e., ideal only strategy), or abstaining from linking to brands altogether. The avoidance of some brands and the embrace of others is a means through which users express aspects of their self-concepts. As the usage of social media platforms such as Facebook continues to increase, it is important for marketers to understand whyconsumers link with certain brands and avoid others as a form of self-expression. Our study sheds light on the importance that marketers need to place on their social media promotional efforts. Participants in our study conveyed that brands can send powerful virtual messages. Furthermore, our findings demonstrate that a brand's online image is just as important as its offline image, and possibly more important. Consistent with self-concept theory, consumers behave in ways that maintain, enhance, and protect their senses of self (Cheema & Kaikati, 2010), and one way consumers do this is by linking with brands on Facebook to portray a certain image to others.