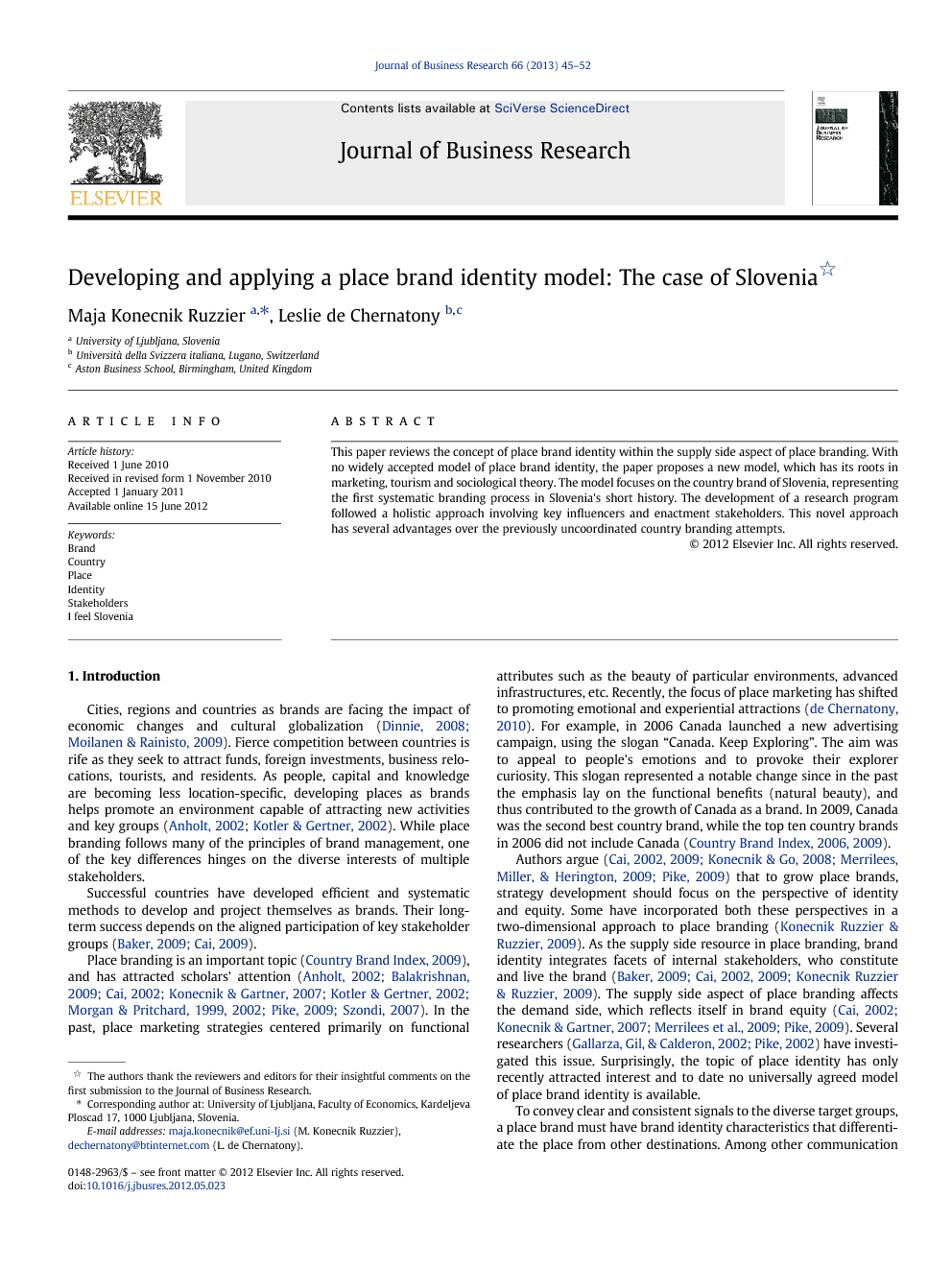 This paper reviews the concept of place brand identity within the supply side aspect of place branding. With no widely accepted model of place brand identity, the paper proposes a new model, which has its roots in marketing, tourism and sociological theory. The model focuses on the country brand of Slovenia, representing the first systematic branding process in Slovenia's short history. The development of a research program followed a holistic approach involving key influencers and enactment stakeholders. This novel approach has several advantages over the previously uncoordinated country branding attempts.

Cities, regions and countries as brands are facing the impact of economic changes and cultural globalization (Dinnie, 2008 and Moilanen and Rainisto, 2009). Fierce competition between countries is rife as they seek to attract funds, foreign investments, business relocations, tourists, and residents. As people, capital and knowledge are becoming less location-specific, developing places as brands helps promote an environment capable of attracting new activities and key groups (Anholt, 2002 and Kotler and Gertner, 2002). While place branding follows many of the principles of brand management, one of the key differences hinges on the diverse interests of multiple stakeholders. Successful countries have developed efficient and systematic methods to develop and project themselves as brands. Their long-term success depends on the aligned participation of key stakeholder groups (Baker, 2009 and Cai, 2009). Place branding is an important topic (Country Brand Index, 2009), and has attracted scholars' attention (Anholt, 2002, Balakrishnan, 2009, Cai, 2002, Konecnik and Gartner, 2007, Kotler and Gertner, 2002, Morgan and Pritchard, 1999, Morgan and Pritchard, 2002, Pike, 2009 and Szondi, 2007). In the past, place marketing strategies centered primarily on functional attributes such as the beauty of particular environments, advanced infrastructures, etc. Recently, the focus of place marketing has shifted to promoting emotional and experiential attractions (de Chernatony, 2010). For example, in 2006 Canada launched a new advertising campaign, using the slogan “Canada. Keep Exploring”. The aim was to appeal to people's emotions and to provoke their explorer curiosity. This slogan represented a notable change since in the past the emphasis lay on the functional benefits (natural beauty), and thus contributed to the growth of Canada as a brand. In 2009, Canada was the second best country brand, while the top ten country brands in 2006 did not include Canada (Country Brand Index, 2006 and Brand Index, 2009). Authors argue (Cai, 2002, Cai, 2009, Konecnik and Go, 2008, Merrilees et al., 2009 and Pike, 2009) that to grow place brands, strategy development should focus on the perspective of identity and equity. Some have incorporated both these perspectives in a two-dimensional approach to place branding (Konecnik Ruzzier & Ruzzier, 2009). As the supply side resource in place branding, brand identity integrates facets of internal stakeholders, who constitute and live the brand (Baker, 2009, Cai, 2002, Cai, 2009 and Konecnik Ruzzier and Ruzzier, 2009). The supply side aspect of place branding affects the demand side, which reflects itself in brand equity (Cai, 2002, Konecnik and Gartner, 2007, Merrilees et al., 2009 and Pike, 2009). Several researchers (Gallarza et al., 2002 and Pike, 2002) have investigated this issue. Surprisingly, the topic of place identity has only recently attracted interest and to date no universally agreed model of place brand identity is available. To convey clear and consistent signals to the diverse target groups, a place brand must have brand identity characteristics that differentiate the place from other destinations. Among other communication approaches, an effective way to present the identity characteristics of a place is through a story (Pride, 2002). In 2007, the lack of a story to communicate Slovenia's identity clearly and systematically served as a starting point for developing Slovenia's identity characteristics. The intention was that the latter could serve as the foundations for strengthening Slovenia as a brand. Although several past attempts strove to build Slovenia as a brand, they failed to employ a systematic approach. The early work focused on advertising rather than branding, stressing visual elements such as logos and symbols, rather than a well-conceived, holistic brand identity. This paper opens with a literature review of place branding and from a supply side perspective reviews the literature on place brand identity. Due to the lack of a widely accepted model of place brand identity, the paper proposes a model that has its roots in the marketing, tourism and sociological literature. The paper then centers on the process of devising and implementing Slovenia's brand identity, which is the first systematic branding process in the short history of Slovenia. A consultancy undertook the governmental project of developing the resulting brand identity, summarized by “I feel Slovenia”. The authors of this paper participated in the project by designing the methodology, undertaking the analysis and making recommendations about the use of information to strategically devise a brand identity.

In the initial post-independence period, Slovenia failed to receive recognition abroad and had an image that did not reflect its virtues (Konecnik, 2004). Given this situation, building Slovenia's brand identity as a solid base for subsequent strategic marketing received a lot of interest. During the early period, several efforts attempted to market Slovenia, albeit without much insights about internal stakeholders. The initial development of the country brand dealt primarily with the superficial level of communicating visual elements – slogans and logos. Moreover, after the first successful campaign, frequent slogan changes occurred, confusing both Slovenians and foreigners. In 2007, a major government initiative to brand Slovenia provided the opportunity for the two authors to devise a new model of place brand identity, which subsequently led to forming the Slovenia brand. Although the project was of a practical nature resulting in the brand identity “I feel Slovenia”, the process for its development was research-based. The new model of brand identity (Fig. 3) consists of the elements: vision, mission, values, personality, benefits and distinguishing preferences. These interact through the place brand's functional and emotional values to make an experiential promise. The model rests on community-based branding (Cai, 2009), albeit the research involved only influential stakeholders and key enactors. The Slovenian brand identity focuses on the theme of nature and natural concepts. The diverse stakeholders generally echoed similar points about the identity elements and understood the place brand identity model easily. The model also enabled diverse stakeholders to participate in developing brand identity. This paper has provided details about the brand identity concepts that surfaced from a research process. The development of a brand identity does not signify the end of work, but rather its continuation. To ensure the appropriate communication and long-term coordination among diverse stakeholders, brand managers joined the process. The Government Communication Office and the Slovenian Tourist Board assumed this role, the latter party having been active in promoting Slovenia in the past. Both brand managers strive to reduce the gap between Slovenia's brand identity and its image. According to previous investigations (Konecnik, 2004), the biggest gap between perceptions and reality exists in quality evaluations. Revised communication to target audiences, centering on market research about perceived image and identity of brand Slovenia, should reduce this gap. This research-based approach to place branding has several managerial implications. First, brand developers have successfully applied the proposed place brand identity model to Slovenia. Those responsible for Slovenia's brand had initially thought tactically, short-term and focused primarily on communications. The model and the process for developing Slovenia's identity raised their appreciation of the need to think strategically, to set longer-term objectives and to draw on a wider range of resources than just communications. The senior team recognized that they have a powerful asset in their country's brand identity and are looking at opportunities to attract more corporations, foreign investment, tourists and to build pride in the local population. The scene is set for further country development, which capitalizes on Slovenia's brand identity. First, visual elements are no longer a focus, leaving more room for greater consideration about how diverse stakeholders can employ a holistic representation of the direction, ethos and benefits of this country for the good of the nation. The team of consultants and researchers has devised a new long-term marketing strategy for tourism aligning with the brand identity elements. At the same time, implementation of green tourism (as an upgrade of Slovenian green) has become a priority. Second, other countries that wish to better brand themselves could employ the research-based approach of using the place brand identity model. While a solid rationale should exist for changes to the template that this paper has proposed for a country brand identity, the three-step research process promotes the identification of brand identity elements unique to that country. Third, adopting a community-based country branding approach (or a key influencers and enactors approach) should encourage greater commitment, surface more stakeholder relevant factors and facilitate greater stakeholder interactions. Future research should consider decisions about which stakeholders to involve on a country basis, but at the bare minimum, this should be the key influencers and enactors. This paper has several limitations. First, as details about the brand identity elements are unique to Slovenia, finding appropriate identity elements for a particular country will require work. Second, each of the identity elements needs explaining carefully to stakeholders (particularly to groups who have never had any exposure to concepts such as missions and values). This research-based approach thus demands care as for some stakeholders conversant with concepts frustration could emerge through over explaining terms, yet for others patience is necessary to fully explain terms. During the project, this problem occurred with the mission statement and that is why representatives did not evaluate the mission. Third, due to a lack of resources, selection focused only on particular stakeholders; other country research should involve a broader group of stakeholders. With no restrictions in terms of financing, time and the knowledge of diverse stakeholders, consulting representatives from all stakeholder groups would be crucial. The team should also engage in a debate about the knowledge the local community have about facets of brand identity since they have to strike a balance about stakeholder representation against their knowledge and potential contribution. A limitation of this study is that with limited resources the local community was not a major influential stakeholder due to their lack of knowledge about place branding. Fourth, as those responsible put no tracking study in place to monitor the impact of a new brand identity, future research should consider doing so to not only assess the impact of the new brand identity but to also use the findings to fine-tune the brand identity.