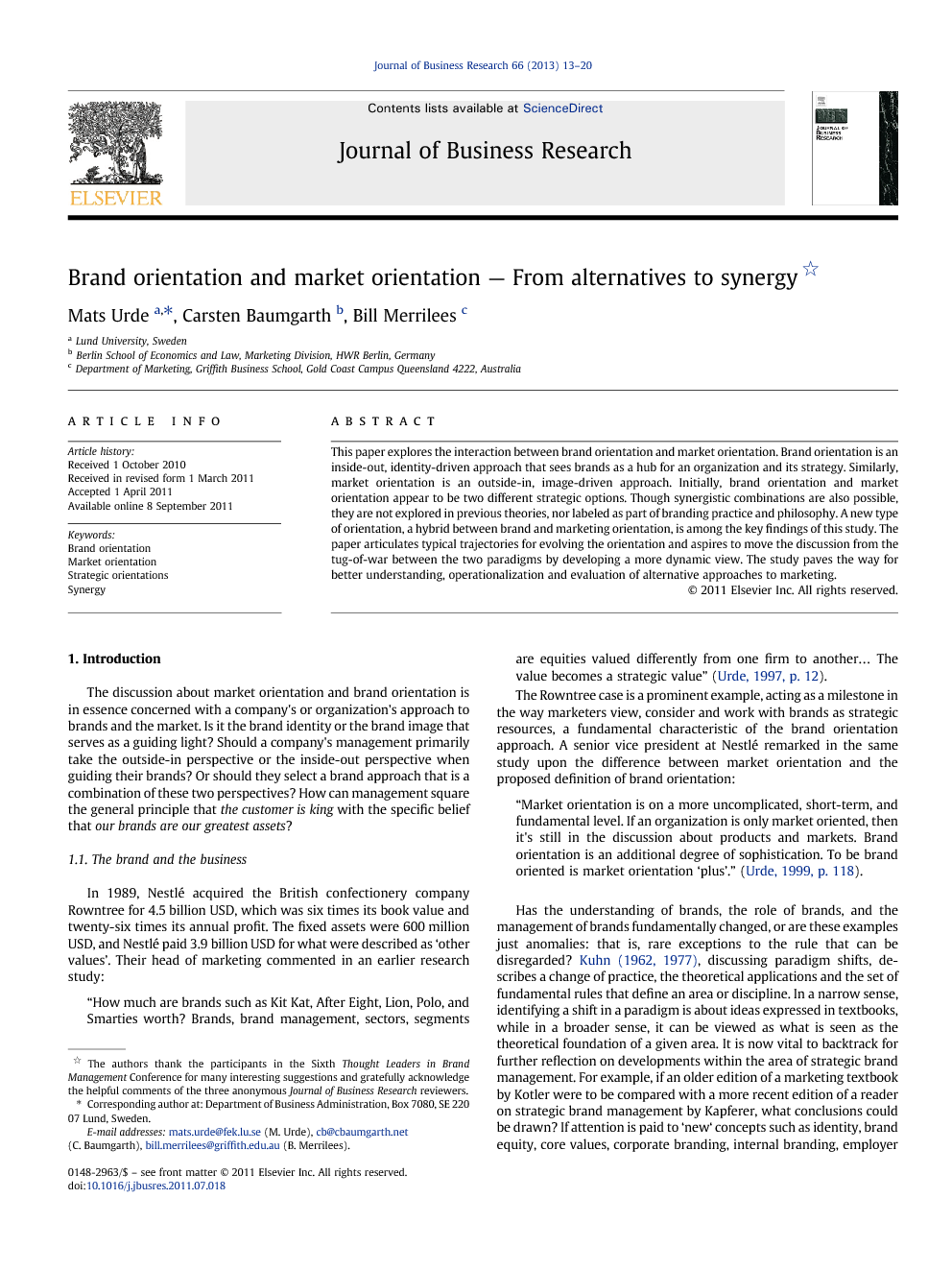 The discussion about market orientation and brand orientation is in essence concerned with a company's or organization's approach to brands and the market. Is it the brand identity or the brand image that serves as a guiding light? Should a company's management primarily take the outside-in perspective or the inside-out perspective when guiding their brands? Or should they select a brand approach that is a combination of these two perspectives? How can management square the general principle that the customer is king with the specific belief that our brands are our greatest assets? 1.1. The brand and the business In 1989, Nestlé acquired the British confectionery company Rowntree for 4.5 billion USD, which was six times its book value and twenty-six times its annual profit. The fixed assets were 600 million USD, and Nestlé paid 3.9 billion USD for what were described as ‘other values’. Their head of marketing commented in an earlier research study “How much are brands such as Kit Kat, After Eight, Lion, Polo, and Smarties worth? Brands, brand management, sectors, segments are equities valued differently from one firm to another… The value becomes a strategic value” (Urde, 1997, p. 12). The Rowntree case is a prominent example, acting as a milestone in the way marketers view, consider and work with brands as strategic resources, a fundamental characteristic of the brand orientation approach. A senior vice president at Nestlé remarked in the same study upon the difference between market orientation and the proposed definition of brand orientation: “Market orientation is on a more uncomplicated, short-term, and fundamental level. If an organization is only market oriented, then it's still in the discussion about products and markets. Brand orientation is an additional degree of sophistication. To be brand oriented is market orientation ‘plus’.” (Urde, 1999, p. 118). Has the understanding of brands, the role of brands, and the management of brands fundamentally changed, or are these examples just anomalies: that is, rare exceptions to the rule that can be disregarded? Kuhn, 1962 and Kuhn, 1977, discussing paradigm shifts, describes a change of practice, the theoretical applications and the set of fundamental rules that define an area or discipline. In a narrow sense, identifying a shift in a paradigm is about ideas expressed in textbooks, while in a broader sense, it can be viewed as what is seen as the theoretical foundation of a given area. It is now vital to backtrack for further reflection on developments within the area of strategic brand management. For example, if an older edition of a marketing textbook by Kotler were to be compared with a more recent edition of a reader on strategic brand management by Kapferer, what conclusions could be drawn? If attention is paid to ‘new‘ concepts such as identity, brand equity, core values, corporate branding, internal branding, employer branding, brand leadership, and reputation, how has theory evolved? And, how do firms manage brands in a practical sense? How are the manager's approach and mindset evolving, with respect to brands, markets and customers?