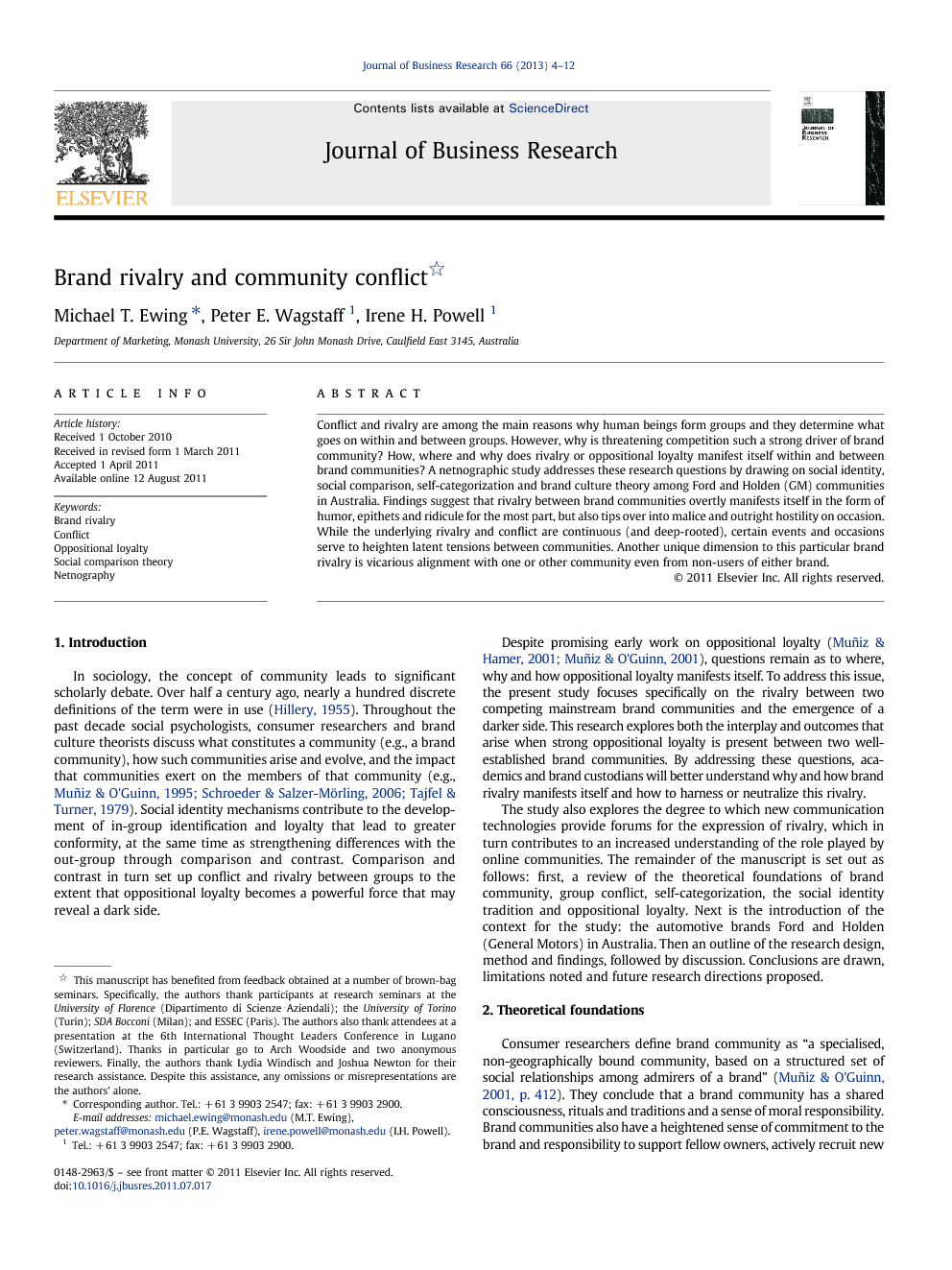 Conflict and rivalry are among the main reasons why human beings form groups and they determine what goes on within and between groups. However, why is threatening competition such a strong driver of brand community? How, where and why does rivalry or oppositional loyalty manifest itself within and between brand communities? A netnographic study addresses these research questions by drawing on social identity, social comparison, self-categorization and brand culture theory among Ford and Holden (GM) communities in Australia. Findings suggest that rivalry between brand communities overtly manifests itself in the form of humor, epithets and ridicule for the most part, but also tips over into malice and outright hostility on occasion. While the underlying rivalry and conflict are continuous (and deep-rooted), certain events and occasions serve to heighten latent tensions between communities. Another unique dimension to this particular brand rivalry is vicarious alignment with one or other community even from non-users of either brand.

In sociology, the concept of community leads to significant scholarly debate. Over half a century ago, nearly a hundred discrete definitions of the term were in use (Hillery, 1955). Throughout the past decade social psychologists, consumer researchers and brand culture theorists discuss what constitutes a community (e.g., a brand community), how such communities arise and evolve, and the impact that communities exert on the members of that community (e.g., Muñiz and O'Guinn, 1995, Schroeder and Salzer-Mörling, 2006 and Tajfel and Turner, 1979). Social identity mechanisms contribute to the development of in-group identification and loyalty that lead to greater conformity, at the same time as strengthening differences with the out-group through comparison and contrast. Comparison and contrast in turn set up conflict and rivalry between groups to the extent that oppositional loyalty becomes a powerful force that may reveal a dark side. Despite promising early work on oppositional loyalty (Muñiz and Hamer, 2001 and Muñiz and O'Guinn, 2001), questions remain as to where, why and how oppositional loyalty manifests itself. To address this issue, the present study focuses specifically on the rivalry between two competing mainstream brand communities and the emergence of a darker side. This research explores both the interplay and outcomes that arise when strong oppositional loyalty is present between two well-established brand communities. By addressing these questions, academics and brand custodians will better understand why and how brand rivalry manifests itself and how to harness or neutralize this rivalry. The study also explores the degree to which new communication technologies provide forums for the expression of rivalry, which in turn contributes to an increased understanding of the role played by online communities. The remainder of the manuscript is set out as follows: first, a review of the theoretical foundations of brand community, group conflict, self-categorization, the social identity tradition and oppositional loyalty. Next is the introduction of the context for the study: the automotive brands Ford and Holden (General Motors) in Australia. Then an outline of the research design, method and findings, followed by discussion. Conclusions are drawn, limitations noted and future research directions proposed.

Brand communities and co-created brand meaning have emerged as among the most important new fields of enquiry in brand management scholarship over the past decade. Generally lauded in the literature, the managerial benefits of strong brand communities are numerous and largely self-evident. However, a selection bias exists in the brands that are studied. Apple and Harley-Davidson, for example, are unique, iconic brands that are without direct competitors. Other examples involve niche, offbeat brands (e.g., Volvo vs. Saab). All are premium-priced. Ford and Holden cars are mass-market, high share, extremely high parity brands. In a sense, they compete to be first among equals. From an automotive patriotism perspective, uniquely Australian battle lines emerged very early in the piece. Holden versus Ford, and the passion that this rivalry engenders, echoes the Australian ethos of picking sides, of making a stand and of staunch loyalty (Bedwell, 2009). Indeed, the first locally authored Australian sociology textbook proudly states, “Australians, for example, often consider the possession of a cottage and a Holden as evidence of middleclass membership” (Sargent, 1987, p. 16). In spite of much that is fallacious, irrational, even positively harmful, a group's character is overall a product of repeated adaptation to a conflict or rivalry situation (Vincent, 1911). Diatribes and dictums: raillery and rancor: the termagant disputation between these two pertinacious brand communities sheds new light on the extant brand community/oppositional loyalty literature. 6.1. Limitations Like any study, this research is not without limitations, focusing only on two brands and one country. That said generalizability is never the immediate goal of case-based exploratory research. The use of a cultural lens to understand these particular brand communities and their oppositional loyalty is in itself of interest and value. As Johns (2001) notes, context is important in management research. Siggelkow (2007) makes a similar point — sometimes, a single context is, in and of itself, worthy of study. Another possible limitation is the confounding effect of the sub-brands (Commodore and Falcon) and the need to disentangle them from their parent brands (Holden and Ford, respectively). Future research, following an experimental design, would best be able to achieve this. A possible limitation (at worst) or more likely, a double-edged sword, is the fact that this study took place exclusively online. Future research on this (or other) brand rivalries might consider an offline design. That said anonymity did not temper sentiments in the fieldwork. Perhaps frequency of conversation or the incidence of profanity would be lower offline. The noted limitation of a male dominated car culture context suggests other contexts for comparison and contrast as fruitful future directions. 6.2. Future research This exploratory study paves the way for future research in a number of directions. For example, why does such an overt rivalry not exist between other key competitors (e.g., Adidas vs. Nike; Coke vs. Pepsi; Playstation vs. Xbox)? Alternatively, if such rivalry does exist, why is this rivalry latent and not more explicit? More work needs to be undertaken with other competitive dyads, for example Alfa Romeo vs. Fiat, triads (Chrysler, GM, Ford) and quadrates (Yamaha, Suzuki, Kawasaki, Honda). Interestingly within an Australian context, Toyota (the new market leader) is not party to the bi-polar rivalry reported in this study. In fact, a journalist posted this very question on a blog recently (Blackburn, 2007) and receives > 700 responses within 24 h. Country-of-origin, consumer ethnocentricism and cultural distinctiveness theories are a consideration in terms of the generalizability of the findings. Are these findings transferable to other countries, contexts or sub-cultures? Some preliminary evidence from the online site Brandkarma (2010) suggests a strong Ford–GM (Chevy) rivalry also exists in the US: The issue of Ford v. Chevy goes back about as far as night v. day, roe v. wade, hell even back to jesus v. pilate. Both sides have drawn lines in the sand and have vowed to take every last prisoner the other group gives up…. I believe I will drive a Chevy Silverado forever… or until I die, whichever comes first. Group rivalry theory (Vincent, 1911) may also shed light on other social phenomena beyond brand communities. Fashion, sport, politics, new technology (e.g., iPad) and even fads engender group dynamics and rivalry along the lines of that explicated in this case. Global warming skeptics, Apple, or Manchester United ‘haters’, political extremists: polarization is common in today's society. The impact of anonymity and the use of derogatory language, socially acceptable or otherwise, is worthy of further exploration. Of course, Web 2.0 technologies foster and facilitate rivalry like never before.