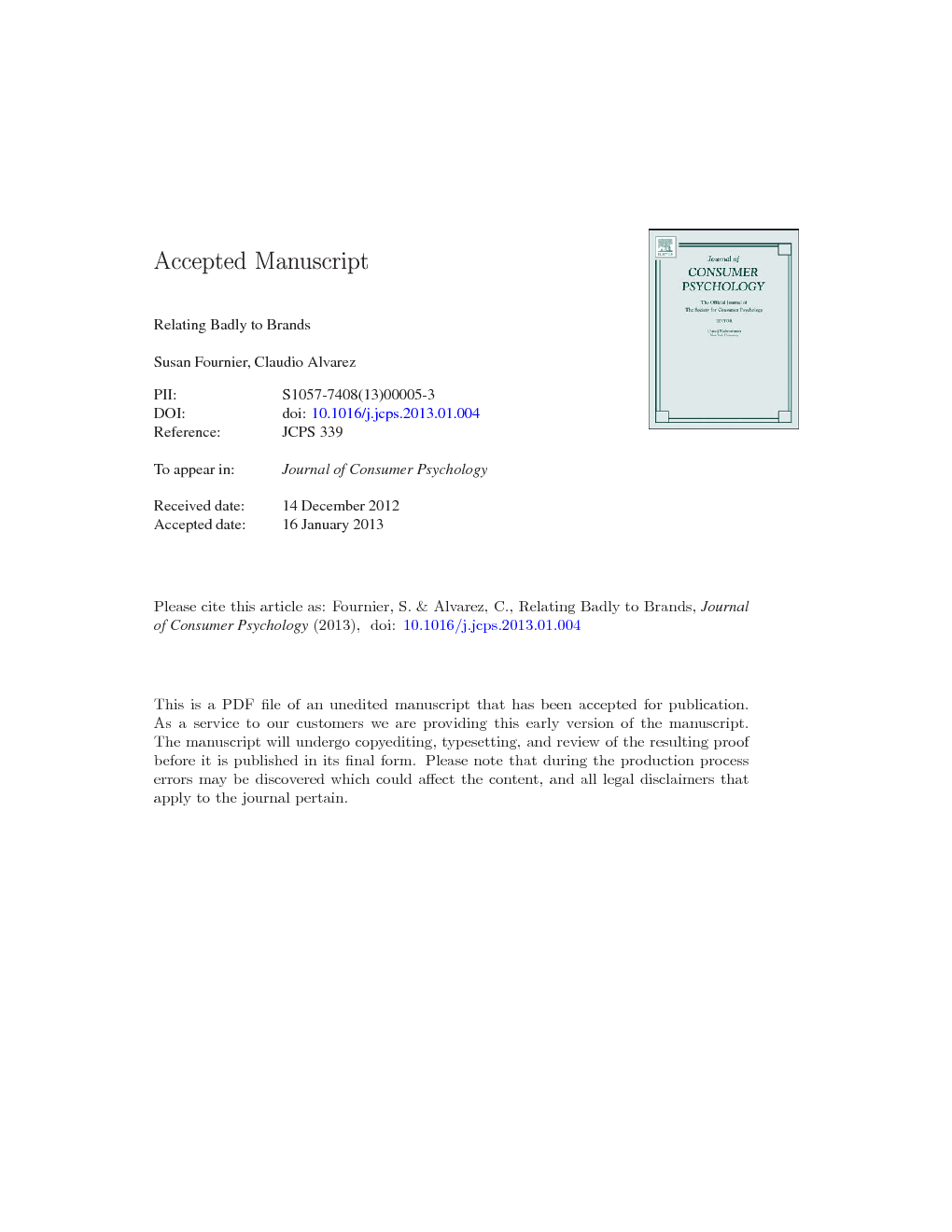 Our commentary focuses on the negative pole of Park et al.'s Attachment-Aversion continuum. We argue that the distinction between positively- and negatively-valenced relationships matters, and open opportunities to further our knowledge concerning what makes a brand relationship “bad.” Two theoretical extensions are offered: (1) additional negativity dimensions beyond brand-self distance including pathology, power, and self- versus brand-focused emotionality; and (2) distinctions between neutrality and variations of emotional ambivalence “in the middle” of the Attachment-Aversion spectrum. Our call is for a science of negative relationships concerning the negative outcomes, processes, states, and attributes of consumers' relationships with brands.

In conclusion, we offer a thought experiment. In the first scenario, you are a brand manager with a relationship portfolio populated by committed partners, best friends, buddies, casual friends, neighbors, boyfriends–girlfriends, teammates, soul mates, and even a few allies and groupies. Now imagine a different management assignment in which your brand portfolio is plagued by troubling relationships: marriages-on-the-rocks, enemies, one-night-stands, dysfunctional addictions, abusive marriages, master–slave entrapments, power plays between brands and consumers, guilt-ridden secret affairs, stalkers and their anxious prey. Building from a solid base of theories established over the past decades, the academy has much to offer the manager in the first scenario who seeks to solidify, maintain, and leverage close consumer–brand relationships, or strengthen weak-but-positive brand engagements by applying these insights over time. Helpful frameworks are also available for understanding and managing people's hostile brand relations, or repairing close relations that have been transgressed. But beyond this, theoretically-grounded advice for managing relationship negatives is scarce. We do not reject the value or significance of frameworks that illuminate positive brand relationships: a focus on loyalty, trust, commitment, and the bonds of emotional attachment, for example, is crucial for understanding brand equity and how it is built. Our point is that perhaps without conscious awareness, our brand theories and prescriptions have adopted assumptions and constructs that are more aligned with a positive brand relationship worldview than a negative worldview. The target paper by Park and colleagues provides a meaningful contribution to the goal of righting the positivity bias in brand relationship research and is to be commended for taking the initial step in accounting for the full range of relationship valence: from negative to positive and in-between. Brand–self distance, a construct that builds thoughtfully from a solid history of consumer research, offers a sensible theoretical frame for illuminating the problems of negative brand relationships. Still, we raise the question as to whether theorizing based on attachment and self-expansion—constructs that stand solidly in the realm of positive, self-implicating, and close relationships—yields an optimal model for understanding negative relationship processes and forms. Our call in this commentary is for a science of negative brand relationships wherein we advance Park et al.'s research through a dedicated focus on phenomena that capture and illuminate relationship negatives—phenomena that have received limited scholarly and practitioner attention in branding models to date. What we are proposing is much like the revolution known as positive psychology (Seligman & Csikszentmihalyi, 2000) and its application in positive organizational scholarship (Cameron et al., 2003 and Cameron and Spreitzer, 2011), but the paradigm shift we advocate is in the reverse. The field of close interpersonal relationships evolved similarly, with a wake-up call for a science of the “dark side” of relationships (Cupach & Spitzberg, 1994) that stimulated much scholarly research (Cupach and Spitzberg, 2004, Cupach and Spitzberg, 2010 and Spitzberg and Cupach, 1998). A science of negative relationships would involve the study of negative outcomes, processes, states, and attributes of peoples' relationships with brands. Emphasis would be put on ideas of “badness,” negative relationship potential, and relational systems in disequilibrium—from the perspectives of both consumers and firms. To propel this effort, existing consumer research can be integrated and further articulated under the negative relationships umbrella, including for example theory on brand transgressions (Aaker, Fournier, & Brasel, 2004), service failure and recovery (Smith, Bolton, & Wagner, 1999), unruly customer behavior (Berry and Seiders, 2008 and Fisk et al., 2010), brand crisis (Dawar & Pillutla, 2000), consumer addictions (Hirschman, 1992), anti-branding ideologies and actions (Elsbach and Bhattacharya, 2001, Kozinets and Handelman, 2004, Lee et al., 2009 and Thompson and Arsel, 2004), doppelgänger brand images (Giesler, 2012 and Thompson et al., 2006), dissociative reference groups (White & Dahl, 2006), and consumer behavior in vulnerable moments (Gao et al., 2008 and Rindfleisch et al., 2009). Of central concern is the phenomenological study of negative subjective brand experiences and the motivators and enablers (in terms of capabilities, traits, values, and structures) of negative brand relationship phenomena. Theories of emotion—negative emotions, group emotions, ambivalent and mixed emotions, emotion blends, and related notions of negative energy—are centrally implicated in a science of negative relationships and much opportunity for development exists here. Underexplored constructs such as civility, character, self-interest, despair (hope), pessimism, pathology, power, victimhood and vulnerability, or cruelty and inhumanity may offer rich and insightful process explanations. A process agenda for negative relationship scholarship may consider “downward relationship spirals” (Fredrickson & Joiner, 2002), escalating negative phenomena, and other protracted and nonlinear patterns of exchange that deviate from expected patterns (see Avery, unpublished dissertation and Avery and Fournier, 2012 for applications in marketing). Additional process insights could derive from research on conflicted interpersonal relationships with relevance to marketing: the unrequited love relationship (Bratslavsky, Baumeister, & Sommer, 1998), for example, wherein a conspiracy of silence results from motivations to avoid painful rejection on the part of both relationship parties, or the seduction–disenchantment process in fatal attractions (Felmlee, 1998). The concepts of equivocation (Chovil, 1994), misunderstanding of relationship rules and templates (Sillars, 1998), and conversational dilemmas (Daly, Diesel, & Weber, 1994) suggest a vital role for communications as a causal process. Subjective well-being (Diener, 2000) will figure prominently as a core dependent variable within negative relationship scholarship and in this sense, the call has much to gain from transformative consumer research (Mick, Pettigrew, Pechmann, & Ozanne, 2011). Whatever the content, a science of relationship negatives would operate under different and yet unarticulated assumptions, pose different questions, and strive toward different goals. Through our commentary, we have sought to inform awareness of the positivity bias in marketing and the counter-posed reality of a brand relationship space beleaguered by pathology, conflict, power imbalance, and negative emotional experience—from the perspectives of both consumers and companies. There is no doubt that developing a science of negative relationships presents a challenge. Park and colleagues offer a strong base for extending theory on relationship negatives in meaningful ways. Herein we have attempted a start at further theorizing, and we acknowledge the humble beginnings of this work. It is our hope that through research that more formally accounts for brand relationship negatives, we might obtain a more holistic and balanced understanding of brand relationships, one that encompasses what is good and what is bad.