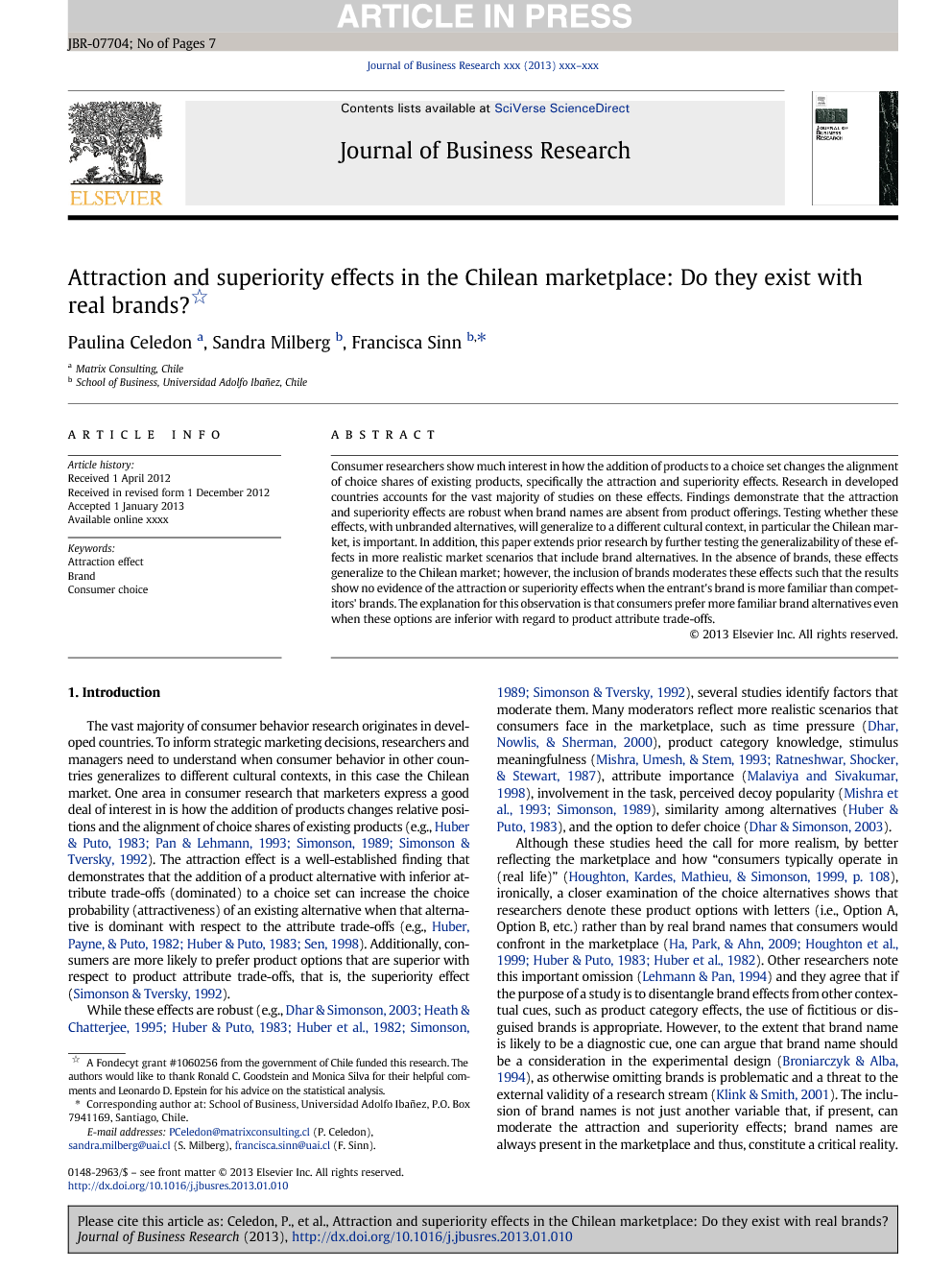 Consumer researchers show much interest in how the addition of products to a choice set changes the alignment of choice shares of existing products, specifically the attraction and superiority effects. Research in developed countries accounts for the vast majority of studies on these effects. Findings demonstrate that the attraction and superiority effects are robust when brand names are absent from product offerings. Testing whether these effects, with unbranded alternatives, will generalize to a different cultural context, in particular the Chilean market, is important. In addition, this paper extends prior research by further testing the generalizability of these effects in more realistic market scenarios that include brand alternatives. In the absence of brands, these effects generalize to the Chilean market; however, the inclusion of brands moderates these effects such that the results show no evidence of the attraction or superiority effects when the entrant's brand is more familiar than competitors' brands. The explanation for this observation is that consumers prefer more familiar brand alternatives even when these options are inferior with regard to product attribute trade-offs.

The vast majority of consumer behavior research originates in developed countries. To inform strategic marketing decisions, researchers and managers need to understand when consumer behavior in other countries generalizes to different cultural contexts, in this case the Chilean market. One area in consumer research that marketers express a good deal of interest in is how the addition of products changes relative positions and the alignment of choice shares of existing products (e.g., Huber and Puto, 1983, Pan and Lehmann, 1993, Simonson, 1989 and Simonson and Tversky, 1992). The attraction effect is a well-established finding that demonstrates that the addition of a product alternative with inferior attribute trade-offs (dominated) to a choice set can increase the choice probability (attractiveness) of an existing alternative when that alternative is dominant with respect to the attribute trade-offs (e.g., Huber et al., 1982, Huber and Puto, 1983 and Sen, 1998). Additionally, consumers are more likely to prefer product options that are superior with respect to product attribute trade-offs, that is, the superiority effect (Simonson & Tversky, 1992). While these effects are robust (e.g., Dhar and Simonson, 2003, Heath and Chatterjee, 1995, Huber and Puto, 1983, Huber et al., 1982, Simonson, 1989 and Simonson and Tversky, 1992), several studies identify factors that moderate them. Many moderators reflect more realistic scenarios that consumers face in the marketplace, such as time pressure (Dhar, Nowlis, & Sherman, 2000), product category knowledge, stimulus meaningfulness (Mishra et al., 1993 and Ratneshwar et al., 1987), attribute importance (Malaviya and Sivakumar, 1998), involvement in the task, perceived decoy popularity (Mishra et al., 1993 and Simonson, 1989), similarity among alternatives (Huber & Puto, 1983), and the option to defer choice (Dhar & Simonson, 2003). Although these studies heed the call for more realism, by better reflecting the marketplace and how “consumers typically operate in (real life)” (Houghton, Kardes, Mathieu, & Simonson, 1999, p. 108), ironically, a closer examination of the choice alternatives shows that researchers denote these product options with letters (i.e., Option A, Option B, etc.) rather than by real brand names that consumers would confront in the marketplace (Ha et al., 2009, Houghton et al., 1999, Huber and Puto, 1983 and Huber et al., 1982). Other researchers note this important omission (Lehmann & Pan, 1994) and they agree that if the purpose of a study is to disentangle brand effects from other contextual cues, such as product category effects, the use of fictitious or disguised brands is appropriate. However, to the extent that brand name is likely to be a diagnostic cue, one can argue that brand name should be a consideration in the experimental design (Broniarczyk & Alba, 1994), as otherwise omitting brands is problematic and a threat to the external validity of a research stream (Klink & Smith, 2001). The inclusion of brand names is not just another variable that, if present, can moderate the attraction and superiority effects; brand names are always present in the marketplace and thus, constitute a critical reality. In situations where brand names are absent, a comparison of product attribute levels among alternatives should drive consumer choice. In today's marketplace, however, consumers typically can choose from a variety of increasingly similar product offerings. What often differentiates product offerings is the brand. Brands vary with respect to a myriad of dimensions such as familiarity, liking, and image. In addition, brands provide value that goes beyond product attributes. When consumers choose among competing brands, they often look for cues to reduce their risk and researchers find brand name to be a universal signal of quality and risk reduction that is invariant across cultures (Dawar & Parker, 1994). Further, brands play an important role and in some cases are the major determinants of choice (e.g., Bristow et al., 2002, Erdem et al., 2006, Heilman et al., 2000 and Hoyer and Brown, 1990). Therefore, the objective of this research is to explicate situations where the attraction and superiority effects occur in more realistic settings that include brand alternatives. In particular, this research examines whether the attraction and superiority effects when brands are absent generalize to Chilean consumers and further tests these effects considering real brands. To understand the impact of brands, this study varies the level of relative brand familiarity among alternatives in a choice set. Relative brand familiarity refers to a consumer's assessment of familiarity with the product entrant brand relative to his or her familiarity with competitor brands in a choice set. This research investigates brand familiarity as a starting point for several important reasons. First, the value that a brand represents to consumers depends both on their familiarity with the brand and on the favorability, strength and uniqueness of brand associations (Keller, 1993). However, when consumers are unfamiliar with a brand they are unlikely to have many, if any, brand associations. Second, research provides compelling evidence that brand familiarity is a powerful risk reducing cue that influences consumer preferences among competitor brands (Heilman et al., 2000 and Hoyer and Brown, 1990). Third, brand credibility and consideration are dependent on familiarity (Erdem & Swait, 2004). Finally, pairing a brand with more or less familiar competitors in a product assortment moderates a brand's attractiveness (Chernev, 2006). Therefore, as a first step in examining brands as moderators of the attraction and superiority effects, this study includes product entrant brands that consumers perceive to be relatively more or less familiar than the competitor brands in a choice set. This paper concludes by addressing the implications of the findings as they relate to the boundaries and ecological validity of earlier studies.