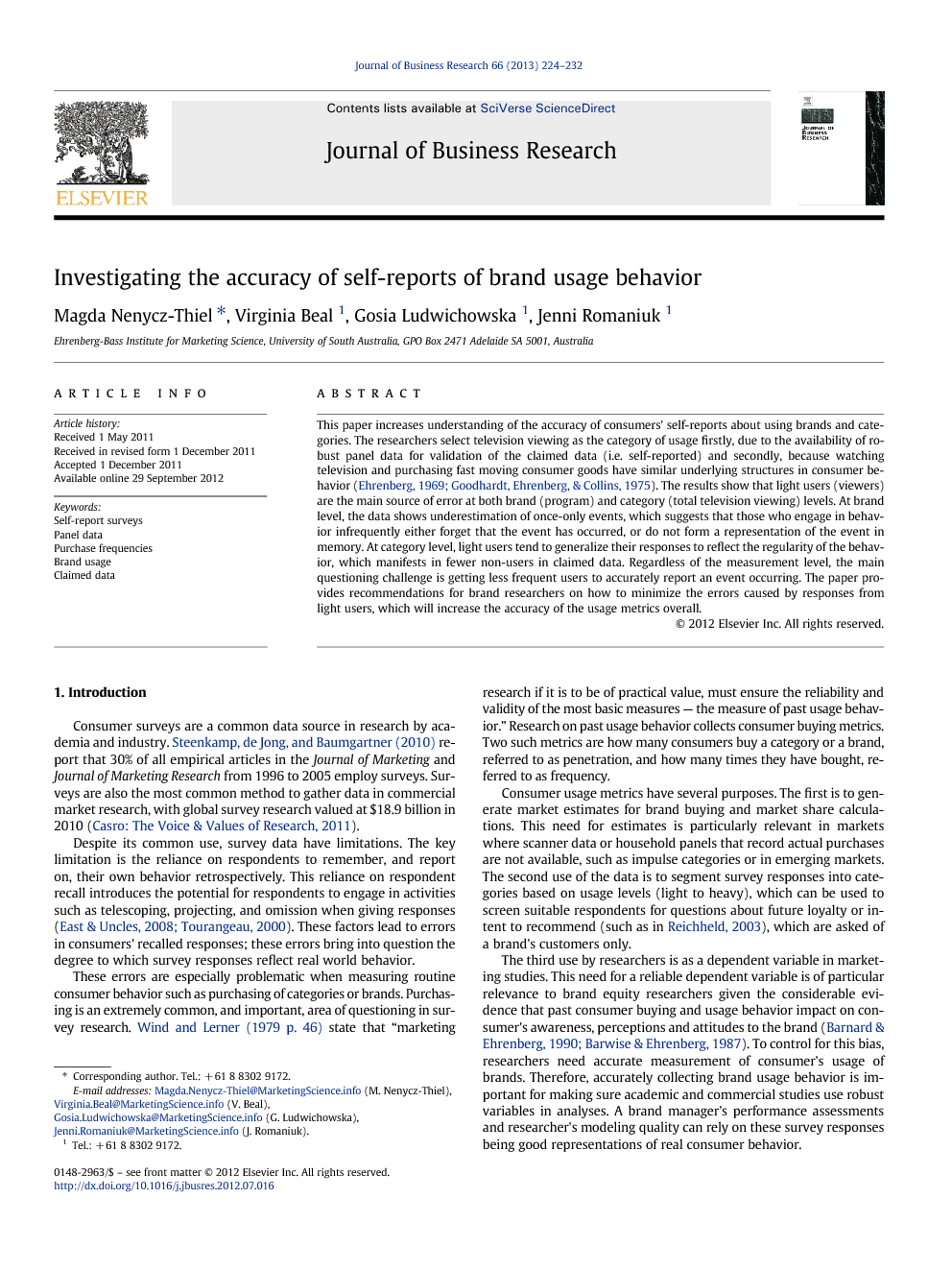 This paper increases understanding of the accuracy of consumers' self-reports about using brands and categories. The researchers select television viewing as the category of usage firstly, due to the availability of robust panel data for validation of the claimed data (i.e. self-reported) and secondly, because watching television and purchasing fast moving consumer goods have similar underlying structures in consumer behavior (Ehrenberg, 1969 and Goodhardt et al., 1975). The results show that light users (viewers) are the main source of error at both brand (program) and category (total television viewing) levels. At brand level, the data shows underestimation of once-only events, which suggests that those who engage in behavior infrequently either forget that the event has occurred, or do not form a representation of the event in memory. At category level, light users tend to generalize their responses to reflect the regularity of the behavior, which manifests in fewer non-users in claimed data. Regardless of the measurement level, the main questioning challenge is getting less frequent users to accurately report an event occurring. The paper provides recommendations for brand researchers on how to minimize the errors caused by responses from light users, which will increase the accuracy of the usage metrics overall.

Consumer surveys are a common data source in research by academia and industry. Steenkamp, de Jong, and Baumgartner (2010) report that 30% of all empirical articles in the Journal of Marketing and Journal of Marketing Research from 1996 to 2005 employ surveys. Surveys are also the most common method to gather data in commercial market research, with global survey research valued at $18.9 billion in 2010 (Casro: The Voice & Values of Research, 2011). Despite its common use, survey data have limitations. The key limitation is the reliance on respondents to remember, and report on, their own behavior retrospectively. This reliance on respondent recall introduces the potential for respondents to engage in activities such as telescoping, projecting, and omission when giving responses (East and Uncles, 2008 and Tourangeau, 2000). These factors lead to errors in consumers' recalled responses; these errors bring into question the degree to which survey responses reflect real world behavior. These errors are especially problematic when measuring routine consumer behavior such as purchasing of categories or brands. Purchasing is an extremely common, and important, area of questioning in survey research. Wind and Lerner (1979 p. 46) state that “marketing research if it is to be of practical value, must ensure the reliability and validity of the most basic measures — the measure of past usage behavior.” Research on past usage behavior collects consumer buying metrics. Two such metrics are how many consumers buy a category or a brand, referred to as penetration, and how many times they have bought, referred to as frequency. Consumer usage metrics have several purposes. The first is to generate market estimates for brand buying and market share calculations. This need for estimates is particularly relevant in markets where scanner data or household panels that record actual purchases are not available, such as impulse categories or in emerging markets. The second use of the data is to segment survey responses into categories based on usage levels (light to heavy), which can be used to screen suitable respondents for questions about future loyalty or intent to recommend (such as in Reichheld, 2003), which are asked of a brand's customers only. The third use by researchers is as a dependent variable in marketing studies. This need for a reliable dependent variable is of particular relevance to brand equity researchers given the considerable evidence that past consumer buying and usage behavior impact on consumer's awareness, perceptions and attitudes to the brand (Barnard and Ehrenberg, 1990 and Barwise and Ehrenberg, 1987). To control for this bias, researchers need accurate measurement of consumer's usage of brands. Therefore, accurately collecting brand usage behavior is important for making sure academic and commercial studies use robust variables in analyses. A brand manager's performance assessments and researcher's modeling quality can rely on these survey responses being good representations of real consumer behavior. Ideally, a researcher would capture consumer buying from longitudinal records of purchases collected in panel or scanner data. However, prohibitive costs (Lee, Hu, & Toh, 2000) lack of technology infrastructure, and various category-buying anomalies mean that this option is often not feasible. Researchers also often require other consumer based brand equity (CBBE) variables, such as awareness, perceptions and attitudes (Christodoulides and de Chernatony, 2010 and Keller, 2003), alongside usage behaviors; however panel companies are reluctant to tax panelists further by surveying them to collect CBBE metrics. Therefore, many researchers and marketers are, and will continue to be, reliant on consumer's self-report responses to measure buying behavior. Prior literature (e.g., Hu et al., 1996, Lee et al., 2000, Ram and Hyung-Shik, 1990 and Wind and Lerner, 1979) reports that claimed survey data are accurate in estimating rank order statistics, but the data tend to under or overestimate actual purchase frequencies. Nevertheless, as noted by Ram and Hyung-Shik (1990), there is little in-depth empirical evidence in the area, and most of the research simply compares the averages, ignoring the heterogeneity in respondents' behavior (Rust, Lemon, & Zeithaml, 2004), and assuming that the same type of error dominates everyone's responses. This study addresses the issue by examining and comparing the underlying distributions of responses from claimed self-reported survey data and panel data to identify where, how and with whom errors are concentrated. The researchers conduct a pilot study in a supermarket confectionery category to test the questioning approaches. The main study takes place in a category where there is a comprehensive, and official, recording of consumer metrics — television viewing. The analysis involves comparing consumer responses obtained from an online survey with those reported by OzTAM, the television industry body officially tasked with providing television audience measurement in Australia. The testing is at overall television viewing (category) and program (brand) viewing levels. The next section discusses the inaccuracies in claimed data caused by memory biases.