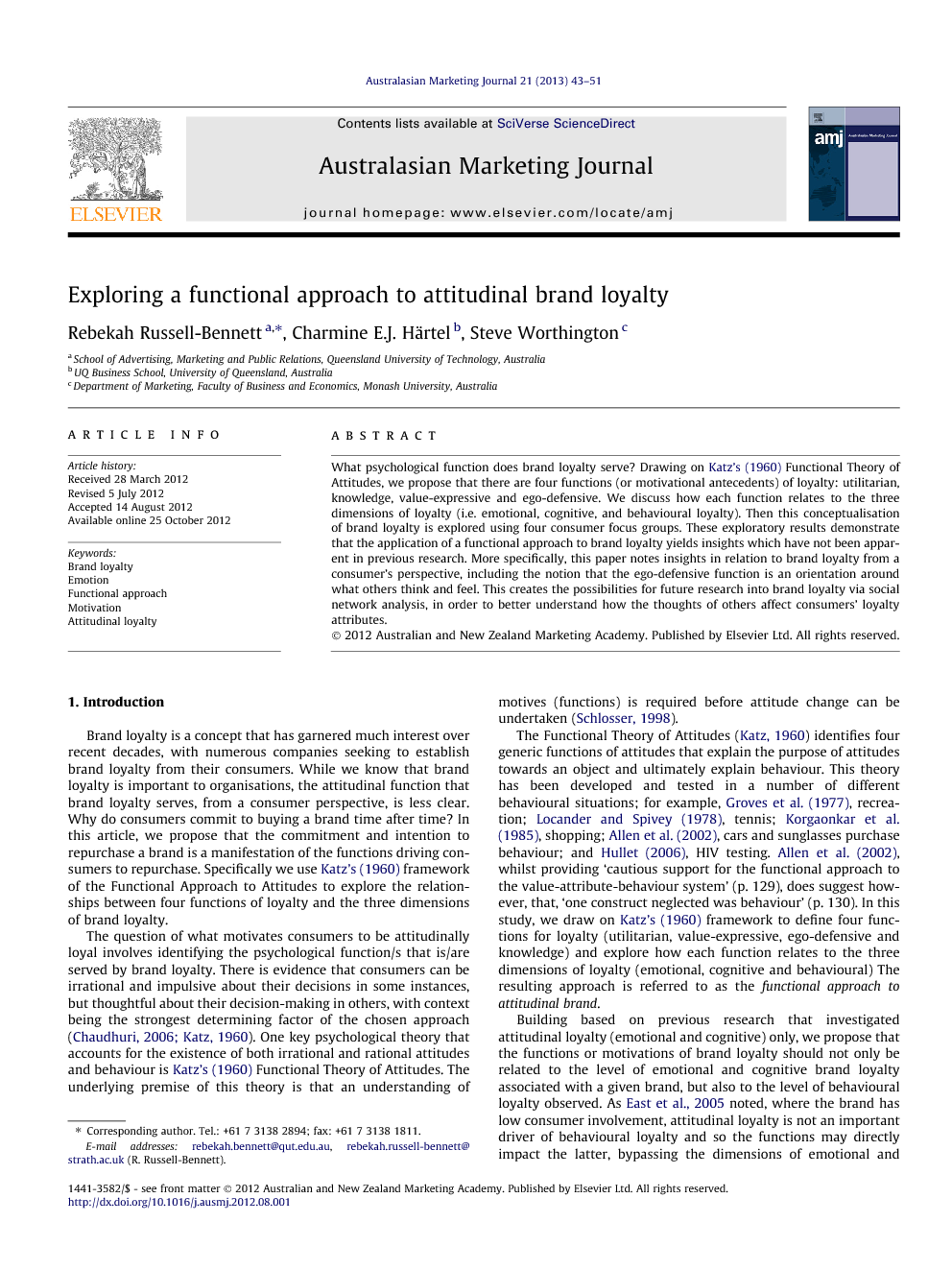 What psychological function does brand loyalty serve? Drawing on Katz’s (1960) Functional Theory of Attitudes, we propose that there are four functions (or motivational antecedents) of loyalty: utilitarian, knowledge, value-expressive and ego-defensive. We discuss how each function relates to the three dimensions of loyalty (i.e. emotional, cognitive, and behavioural loyalty). Then this conceptualisation of brand loyalty is explored using four consumer focus groups. These exploratory results demonstrate that the application of a functional approach to brand loyalty yields insights which have not been apparent in previous research. More specifically, this paper notes insights in relation to brand loyalty from a consumer’s perspective, including the notion that the ego-defensive function is an orientation around what others think and feel. This creates the possibilities for future research into brand loyalty via social network analysis, in order to better understand how the thoughts of others affect consumers’ loyalty attributes.

Brand loyalty is a concept that has garnered much interest over recent decades, with numerous companies seeking to establish brand loyalty from their consumers. While we know that brand loyalty is important to organisations, the attitudinal function that brand loyalty serves, from a consumer perspective, is less clear. Why do consumers commit to buying a brand time after time? In this article, we propose that the commitment and intention to repurchase a brand is a manifestation of the functions driving consumers to repurchase. Specifically we use Katz’s (1960) framework of the Functional Approach to Attitudes to explore the relationships between four functions of loyalty and the three dimensions of brand loyalty. The question of what motivates consumers to be attitudinally loyal involves identifying the psychological function/s that is/are served by brand loyalty. There is evidence that consumers can be irrational and impulsive about their decisions in some instances, but thoughtful about their decision-making in others, with context being the strongest determining factor of the chosen approach (Chaudhuri, 2006 and Katz, 1960). One key psychological theory that accounts for the existence of both irrational and rational attitudes and behaviour is Katz’s (1960) Functional Theory of Attitudes. The underlying premise of this theory is that an understanding of motives (functions) is required before attitude change can be undertaken (Schlosser, 1998). The Functional Theory of Attitudes (Katz, 1960) identifies four generic functions of attitudes that explain the purpose of attitudes towards an object and ultimately explain behaviour. This theory has been developed and tested in a number of different behavioural situations; for example, Groves et al. (1977), recreation; Locander and Spivey (1978), tennis; Korgaonkar et al. (1985), shopping; Allen et al. (2002), cars and sunglasses purchase behaviour; and Hullet (2006), HIV testing. Allen et al. (2002), whilst providing ‘cautious support for the functional approach to the value-attribute-behaviour system’ (p. 129), does suggest however, that, ‘one construct neglected was behaviour’ (p. 130). In this study, we draw on Katz’s (1960) framework to define four functions for loyalty (utilitarian, value-expressive, ego-defensive and knowledge) and explore how each function relates to the three dimensions of loyalty (emotional, cognitive and behavioural) The resulting approach is referred to as the functional approach to attitudinal brand. Building based on previous research that investigated attitudinal loyalty (emotional and cognitive) only, we propose that the functions or motivations of brand loyalty should not only be related to the level of emotional and cognitive brand loyalty associated with a given brand, but also to the level of behavioural loyalty observed. As East et al., 2005 noted, where the brand has low consumer involvement, attitudinal loyalty is not an important driver of behavioural loyalty and so the functions may directly impact the latter, bypassing the dimensions of emotional and cognitive loyalty altogether Conversely, where the brand has high involvement, attitudinal loyalty is an important driver of behavioural loyalty (Russell-Bennett et al., 2007) and thus, the functions are expected to affect behaviour through their impact on emotional and cognitive brand loyalty. For these reasons, we examined the effect of the functions of attitudinal brand loyalty on the three dimensions of brand loyalty: emotional, cognitive, and behavioural brand loyalty. These three dimensions are explored and demonstrated in the research reported in Worthington et al. (2010). This article explores the functions of consumer brand loyalty through two research questions: 1. What is the relationship between the functions of brand loyalty and the three dimensions of loyalty? 2. What factors influence each function-dimension relationship? To address these research questions, exploratory research in the form of four focus groups, with a total of 24 participants, was undertaken. This yielded rich in-depth information about the features and complexities of attitudinal brand loyalty and its motivational antecedents with a proposed model arising from the data. The results of the research indicate that the functional approach to attitudinal brand loyalty offers a useful explanation for why some consumers are loyal to particular brands

Brand loyalty is functional for consumers, as demonstrated by this research. While the findings indicate that consumers tend to use all four functions of loyalty (i.e. ego-defensive, knowledge, utilitarian and value-expressive), they also exhibit a dominant approach whereby one function of loyalty is paramount. Consumers whose dominant function manifests as an emotional component (i.e. value-expressive or ego-defensive) tend to show more true loyalty (i.e. both attitudinal and behavioural loyalty) (Dick and Basu, 1994), than consumers whose dominant function relies little on emotions (i.e. knowledge and utilitarian). These findings underscore the need for companies to create emotional value for consumers when loyalty is an important business outcome. Thus if managers seek to change the loyalty levels of their consumers, then they must first understand its underlying function. It is hoped that this exploratory research will provide the foundations for further research to seeking to develop an in-depth understanding of this aspect of loyalty. In particular this should involve social network analysis in order to help researchers better understand how the thoughts of others affect consumer’s loyalty attitudes.