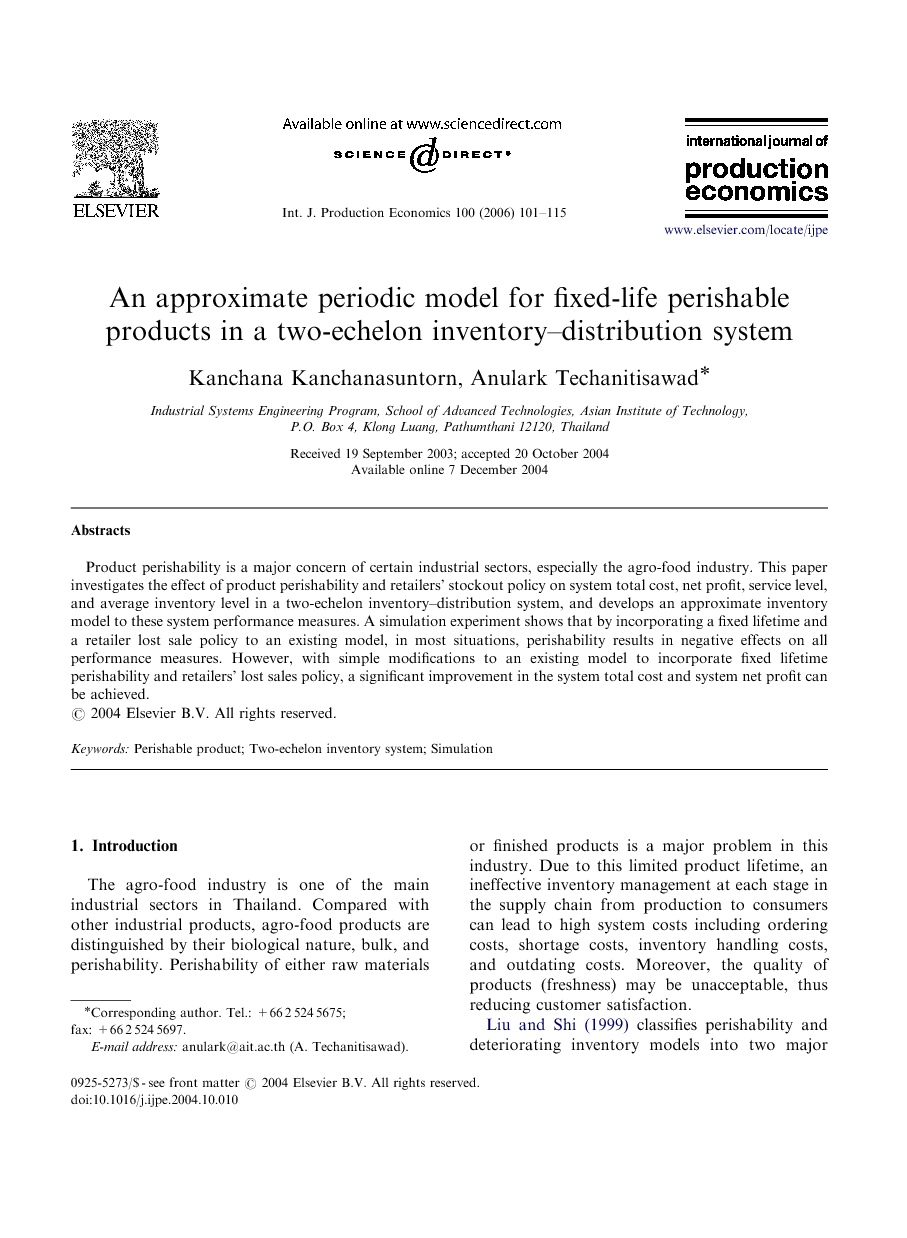 Product perishability is a major concern of certain industrial sectors, especially the agro-food industry. This paper investigates the effect of product perishability and retailers’ stockout policy on system total cost, net profit, service level, and average inventory level in a two-echelon inventory–distribution system, and develops an approximate inventory model to these system performance measures. A simulation experiment shows that by incorporating a fixed lifetime and a retailer lost sale policy to an existing model, in most situations, perishability results in negative effects on all performance measures. However, with simple modifications to an existing model to incorporate fixed lifetime perishability and retailers’ lost sales policy, a significant improvement in the system total cost and system net profit can be achieved.

The agro-food industry is one of the main industrial sectors in Thailand. Compared with other industrial products, agro-food products are distinguished by their biological nature, bulk, and perishability. Perishability of either raw materials or finished products is a major problem in this industry. Due to this limited product lifetime, an ineffective inventory management at each stage in the supply chain from production to consumers can lead to high system costs including ordering costs, shortage costs, inventory handling costs, and outdating costs. Moreover, the quality of products (freshness) may be unacceptable, thus reducing customer satisfaction. Liu and Shi (1999) classifies perishability and deteriorating inventory models into two major categories, namely decay models and finite lifetime models. Decay models deal with inventory that shrinks continuously and proportionally with time, while finite lifetime models assume a limited lifetime for each item. Furthermore, the finite lifetime can be generally classified into two subcategories, namely common or fixed finite lifetime and random finite lifetime. Items with common finite lifetimes, usually referred in the literature as perishable items (Liu and Lian, 1999), perish at the same age if not used by demand. Fresh produce, cans of fruit, foodstuffs, and drugs are examples of the items having fixed finite lifetimes. The random finite lifetimes, on the other hand, are treated as random variables with certain probability distributions, such as exponential and Erlang. Items with random lifetimes, thus, spoil at different ages. Past research on the Fixed-Life Perishable Problem (FLPP), such as Fries (1975), Nandakumar and Morton (1993), Lian and Liu (2001), Chiu (1995), and Williams and Patuwo (1999), mainly address single stage inventory systems. Fujiwara et al. (1997) discuss a multi-echelon inventory system with perishable items, assuming separate lifetime for each stage. Yet, in reality, the product lifetime is recognized once it has been produced. This paper, therefore, attempts to address an approach that can handle the integrated fixed product lifetime. Based on our observations in Thailand, the periodic review inventory policy, due to its simplicity, is appropriate and widely practiced in the agro-food inventory system. To our limited knowledge, no similar periodic inventory model for a single, fixed life perishable product in the two-echelon inventory–distribution system, as addressed in this paper, exists in the literature. Our two-echelon inventory system consists of one central warehouse and a number of non-identical retail outlets. Our assumptions are as follows. The demand at each retail outlet is static and normally distributed. Products are supplied by outside suppliers to the central warehouse, with zero product age, immediately before leaving the suppliers. Transportation lead-time from the outside suppliers to the central warehouse, and from the central warehouse to each retail outlet, are assumed constant with different positive values. Stockout at the central warehouse is considered as backorders, based on the first-come-first-served allocation policy, while the unsatisfied demand at retailers is considered lost due to the observed nature of the agro-food industry. Due to its complicated nature, the exact form of an optimal replenishment policy for the multi-echelon inventory system still cannot be found; or else the computation becomes very difficult. Glasserman and Tayur (1995) suggest that the general scheme for compromising between the complexity of the model and the reality of the application is: to solve a tractable approximation of the real system to obtain a candidate policy; to evaluate the performance of the policy in a simulated model of the real system; and to improve the policy through an experiment using the simulation model. In this study, this concept is applied to develop a simple, reasonable approximation to the cost function of this problem, based on the modification of an existing model by Matta and Sinha (1995). The purpose of this study is thus, twofold. The first objective is to investigate the effect of product perishability and stockout policy at retailers on system total cost, system net profit, service level, and average inventory level. The knowledge and understandings of such effects can lead us to derive an approximate model, as our second objective is to illustrate a simple model, modifying Matta and Sinha's (1995) model, to incorporate perishability and a different stockout policy in order to improve its performances. This paper is organized as follows. Firstly in Section 2, we provide a literature review of the periodic review policy for the two-echelon inventory–distribution system and define the problem, the policy, and the model to be addressed here with key notation. Then in Section 3, a complete derivation to modify the approximate model of Matta and Sinha's (1995) to deal with perishability and retailers’ lost sales is presented. In Section 4, with details of the applied simulation model, the performance of Matta and Sinha's (1995) policy, when perishability exists, specifically in terms of the designated performance measures, is analyzed to give motivation and justification for our modification. The proposed model is also evaluated for its effectiveness and the results are also discussed in Section 4. Finally, we provide conclusions and further research in Section 5.

In this paper, a periodic review inventory–distribution model was investigated and proposed to deal with the case of a fixed-life perishable product and lost sales at retail outlets. Matta and Sinha's (1995) model was applied and evaluated using a simulation experiment for certain key performance measures under many different scenarios of system parameters. The results show that perishability and stockout policy that are different from the assumptions of Matta and Sinha (1995) cause significant effect to the performance of the inventory system. In most situations, the product perishability results in negative effects on all major performance measures, including a lower service level in terms of fill rate, a higher system total cost, and a lower system net profit. As a result of such significant effects of the perishability and stockout policy, an improved model was proposed to deal with our specific problem. In this paper, a simple method to modify the Matta and Sinha (1995) model was presented to address perishability and retailers’ lost sales, resulting in an approximate total cost function to be minimized. The performances of the proposed model, based on system total cost, system net profit, and service level were subsequently evaluated by simulation. The experimental outcomes show a significant improvement in the proposed model over the original model. Although, in some cases, it could result in a higher shortage cost, other positive effects, leading to lower total cost, negate this disadvantage. The main benefits or marginal profits to be gained from the proposed model are evident when applied to products which are in high demand and have a short life span, such as fresh produce, fruit juice and most foodstuffs (usually those products with a lead-time of only one period). Possible further research includes the lead-time distribution at both central warehouse and retail outlets and other realistic characteristics of the system. By relaxing some assumptions, the exact solution approach may be developed to improve the accuracy of this approximate model. The model can also be extended to the multi-echelon case, as well as being used in the supply chain environment.