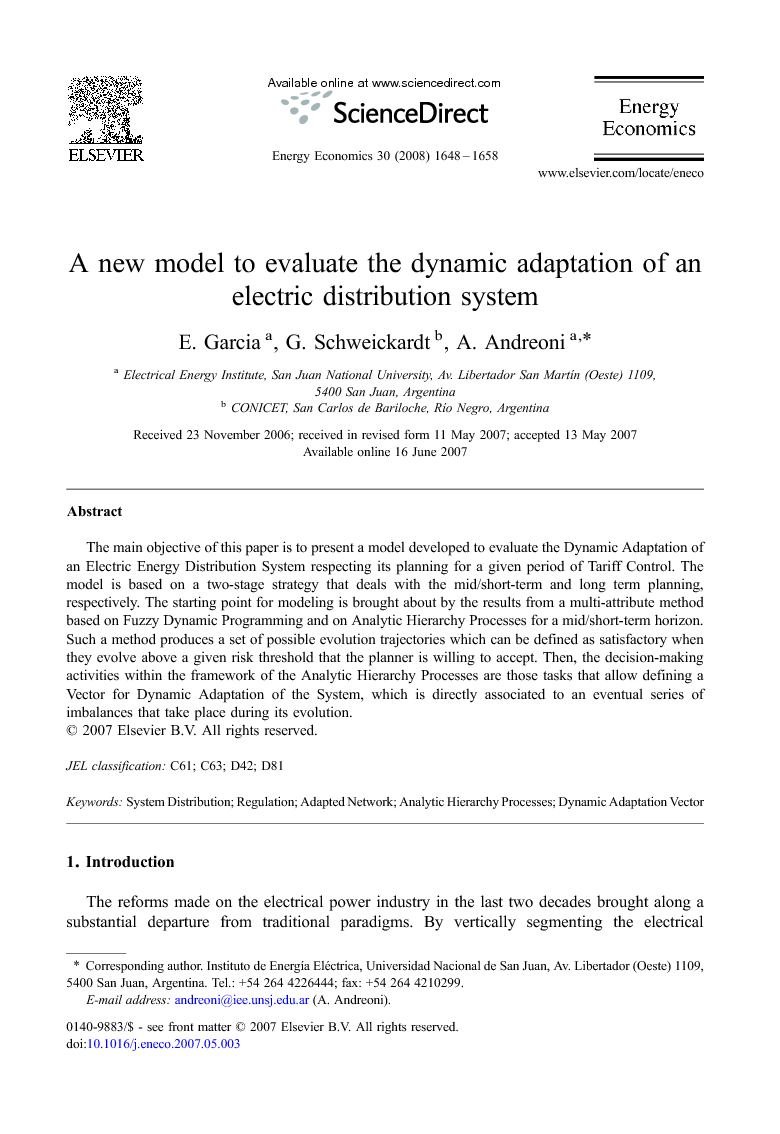 The main objective of this paper is to present a model developed to evaluate the Dynamic Adaptation of an Electric Energy Distribution System respecting its planning for a given period of Tariff Control. The model is based on a two-stage strategy that deals with the mid/short-term and long term planning, respectively. The starting point for modeling is brought about by the results from a multi-attribute method based on Fuzzy Dynamic Programming and on Analytic Hierarchy Processes for a mid/short-term horizon. Such a method produces a set of possible evolution trajectories which can be defined as satisfactory when they evolve above a given risk threshold that the planner is willing to accept. Then, the decision-making activities within the framework of the Analytic Hierarchy Processes are those tasks that allow defining a Vector for Dynamic Adaptation of the System, which is directly associated to an eventual series of imbalances that take place during its evolution.

The reforms made on the electrical power industry in the last two decades brought along a substantial departure from traditional paradigms. By vertically segmenting the electrical production chain, three main participant areas can be identified as operating independently. They are generation, transmission and distribution, onto which new market conditions are currently being established. In the segments where disputability may arise, contestability is introduced with the participation of multiple agents (e.g., generation). In segments where this is not feasible, regulation is imposed (Tye, 1990, Spulber, 1989 and Littlechild, 2000). Specifically, in electrical distribution, two kinds of services are conceived: the Network Service of uncontestable monopoly characteristic, and the Commercialization Service, regarded a contestable market. The conditions required to introduce contestability in the electrical distribution market – by splitting services and by allowing for competition in the commercialization sector – are difficult to implement. The distribution segment linked to Network Services is featured as a natural uncontestable monopoly. The unit cost “network”, over which the various contestants will compete, requires that the computations to valuate the Network Service be made under strict economic constraints. Therefore, it is mandatory to define the concept of efficient network clearly. In order to make effective – and to ensure – a network service rendered under economically efficient conditions, the concept of Economically Adapted Distribution System, or Adapted Network, is introduced. The concept of economically adapted system is not new. The Chilean regulation defines it as “an installation is economically adapted when it allows producing a given quantity at the lowest cost” (Rudnick et al., 1996). The Peruvian regulation defines this same concept as “a system economically adapted is that electric system where an equilibrium between the energy offer and the demand exists, seeking for low costs and maintaining the quality of the service”. The traditional concept of “Economically Adapted System” is based on the neoclassic economics paradigm. It is related only to the production efficiency, which implies the expansion and operation of the Electric Energy Distribution System (EEDS) with a minimum cost. It also assumes a permanent system equilibrium — a reason to state that such efficiency must remain even in the future, regardless of the fact that the planning decisions are made in the present. It ignores the uncertainties, or it renders them a stochastic nature, which they do not necessarily show to have in reality. On the above grounds, the need to count with a model that may give all the elements needed to find – at all times – the network's adaptation degree to the given conditions is evident. In the bibliography, papers that evaluate the dynamic adaptation of an electrical energy distribution network have not found. Various proposals to evaluate the dynamic adaptation of electric systems, bearing in mind not only technical but also economic aspects for the agents decision-taking, have been developed (Wildberger, 1997, Massoud, 2002, Conzelmann et al., 2005 and Macal and North, 2005). In Conzelmann et al. (2005) and Macal and North (2005) a presentation of the Electricity Market Complex Adaptive Model (EMACS) is made. EMCAS is an agent-based simulation model of the electric power market designed to investigate market restructuring and deregulation and to understand the implications of a competitive power market on electricity prices, availability, and reliability. Massoud (2002) discusses the development of the Simulator for Electrical Power Industry Agents (SEPIA) sponsored by the Electric Power Research Institute (EPRI). SEPIA uses autonomous adaptive agents to represent possible industrial components (e.g., generation units, transmission system, and load) and the corporate entities that own these components. The objective is to develop a high-fidelity scenario-free modeling and optimization tool to use for gaining strategic insight into the operation of the deregulated power industry. Nevertheless, none of these models, in their current version, allows determining the degree of adaptation of a distribution network before special conditions of its market.

It is in the alternative paradigm, featured by the fundamental uncertainty of Keynes (Lavoie, 1992) and driven by the risk, where the need for introducing techniques for evolutionary programming to solve the long-term planning arises. It is rather preferred to have a set of good solutions (evolution trajectories for the system) than an ‘optimal’ solution that is based on a non-existent equilibrium. In terms of system adaptation for a certain current state, VYager,Pre, can be reconstructed. However, the equation for the hierarchic composition principle View the MathML sourceMPAPrexVYager,Pre=λpPrexVYager,Pre Turn MathJax on does not have a unique solution in (MPAPre,λPPre). a) MPAPre = Re(MPACPre) turns to be consistent, but the vector VYager,Pre, priorizes the attributes rather inconsistently to the eyes of the planner/regulator. The case will then be one of a consistent de-adaptation (λPPre ≈ n; VYager,Pre ≠ VYager,Proy); b) The situation (λPPre ≈ n; VYager,Pre ≠ VYager,Proy) with consistent VYager,Pre constitutes a consistent adaptation of the system. It will be a perfect one if (λPPre ≈ n; VYager,Pre = VYager,Proy); c) Lastly, the case (λPPre 》 n; VYager,Pre ≠ VYager,Proy) with non-consistent VYager,Pre constitutes a non-consistent de-adaptation respecting the projected system and the rationality of its agents. The evaluation of the static adaptation of the above point is complemented by a dynamic evaluation, by taking into account the Adaptation Variation in the current state. It introduces the disturbance that the future system trajectory may experience as a consequence of its history. The dynamic adaptation is weighed through a series of imbalances, and not with respect to the equilibrium supposed by the productive efficiency.