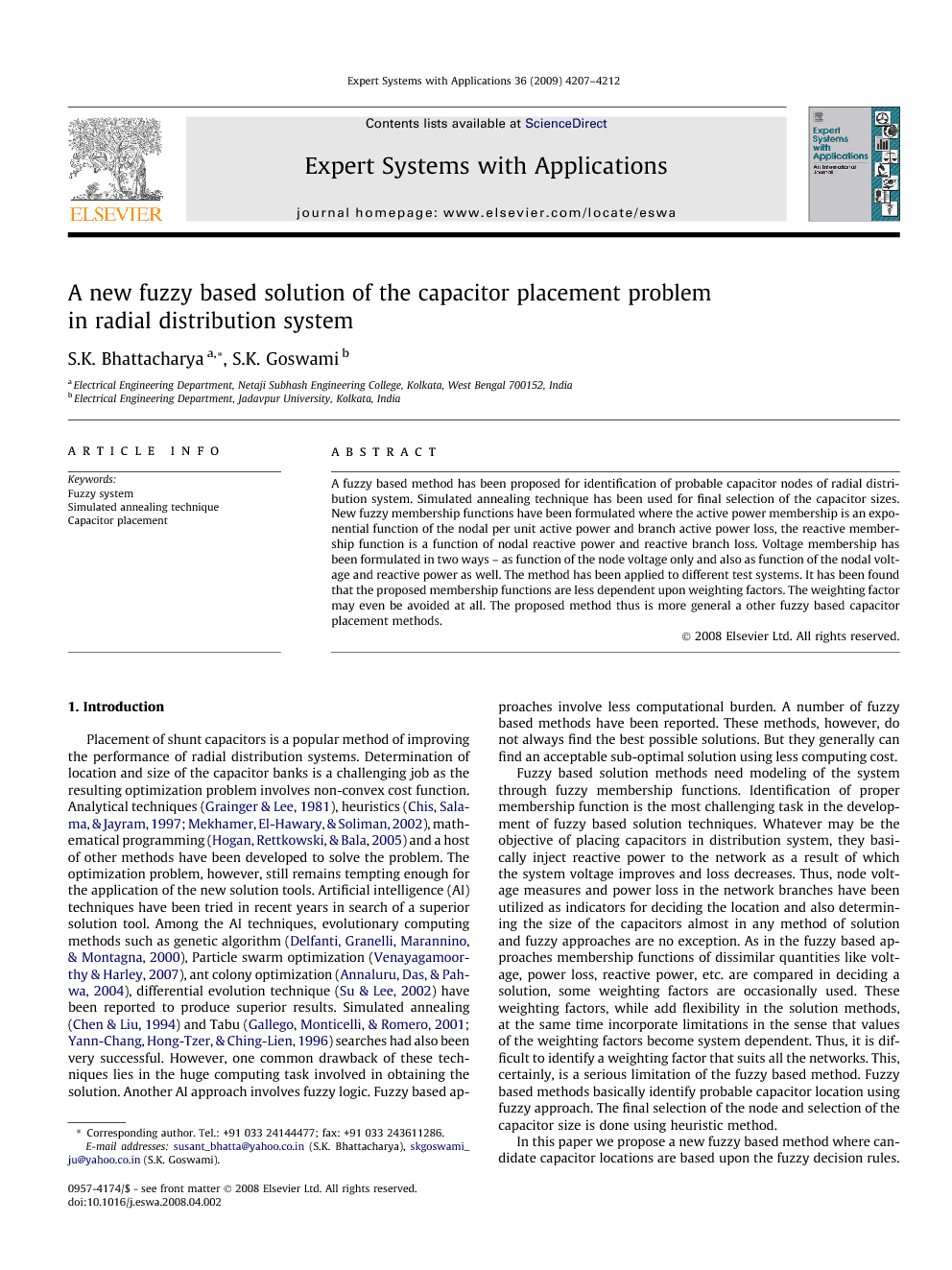 Placement of shunt capacitors is a popular method of improving the performance of radial distribution systems. Determination of location and size of the capacitor banks is a challenging job as the resulting optimization problem involves non-convex cost function. Analytical techniques (Grainger & Lee, 1981), heuristics (Chis et al., 1997 and Mekhamer et al., 2002), mathematical programming (Hogan, Rettkowski, & Bala, 2005) and a host of other methods have been developed to solve the problem. The optimization problem, however, still remains tempting enough for the application of the new solution tools. Artificial intelligence (AI) techniques have been tried in recent years in search of a superior solution tool. Among the AI techniques, evolutionary computing methods such as genetic algorithm (Delfanti, Granelli, Marannino, & Montagna, 2000), Particle swarm optimization (Venayagamoorthy & Harley, 2007), ant colony optimization (Annaluru, Das, & Pahwa, 2004), differential evolution technique (Su & Lee, 2002) have been reported to produce superior results. Simulated annealing (Chen & Liu, 1994) and Tabu (Gallego et al., 2001 and Yann-Chang et al., 1996) searches had also been very successful. However, one common drawback of these techniques lies in the huge computing task involved in obtaining the solution. Another AI approach involves fuzzy logic. Fuzzy based approaches involve less computational burden. A number of fuzzy based methods have been reported. These methods, however, do not always find the best possible solutions. But they generally can find an acceptable sub-optimal solution using less computing cost. Fuzzy based solution methods need modeling of the system through fuzzy membership functions. Identification of proper membership function is the most challenging task in the development of fuzzy based solution techniques. Whatever may be the objective of placing capacitors in distribution system, they basically inject reactive power to the network as a result of which the system voltage improves and loss decreases. Thus, node voltage measures and power loss in the network branches have been utilized as indicators for deciding the location and also determining the size of the capacitors almost in any method of solution and fuzzy approaches are no exception. As in the fuzzy based approaches membership functions of dissimilar quantities like voltage, power loss, reactive power, etc. are compared in deciding a solution, some weighting factors are occasionally used. These weighting factors, while add flexibility in the solution methods, at the same time incorporate limitations in the sense that values of the weighting factors become system dependent. Thus, it is difficult to identify a weighting factor that suits all the networks. This, certainly, is a serious limitation of the fuzzy based method. Fuzzy based methods basically identify probable capacitor location using fuzzy approach. The final selection of the node and selection of the capacitor size is done using heuristic method. In this paper we propose a new fuzzy based method where candidate capacitor locations are based upon the fuzzy decision rules. A new set of membership functions is proposed for this purpose. Effect of the weighting factors on the performance of newly proposed membership functions is investigated. It is shown that proposed membership functions are less influenced by the weighing factors. The final selection of the nodes and capacitor sizes are based upon a simulated annealing algorithm. The performance of the proposed methods is compared with some other fuzzy and heuristics based capacitor placement methods found in literature.

This paper proposed new fuzzy membership functions for identification of probable capacitor locations of radial distribution systems. A new algorithm for selection of capacitor nodes is presented and simulated annealing technique is employed for final sizing of the capacitors at the nodes. It has been found that the proposed membership functions are less dependent on the weighting factors. Therefore the proposed method is more general than other fuzzy based capacitor placement methods. Comparison with other fuzzy and heuristic based methods shows that the proposed method produces better solutions.