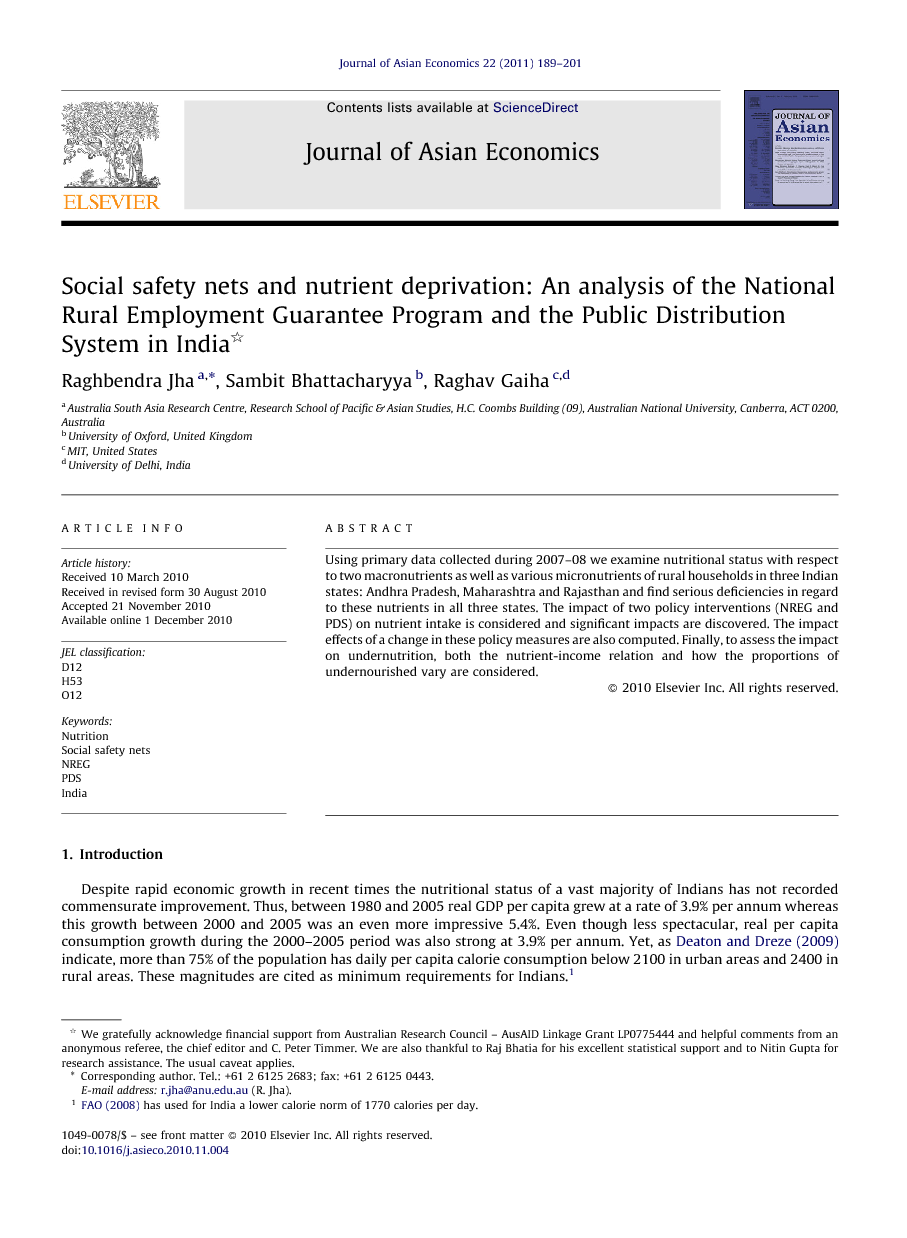 Using primary data collected during 2007–08 we examine nutritional status with respect to two macronutrients as well as various micronutrients of rural households in three Indian states: Andhra Pradesh, Maharashtra and Rajasthan and find serious deficiencies in regard to these nutrients in all three states. The impact of two policy interventions (NREG and PDS) on nutrient intake is considered and significant impacts are discovered. The impact effects of a change in these policy measures are also computed. Finally, to assess the impact on undernutrition, both the nutrient-income relation and how the proportions of undernourished vary are considered.

Despite rapid economic growth in recent times the nutritional status of a vast majority of Indians has not recorded commensurate improvement. Thus, between 1980 and 2005 real GDP per capita grew at a rate of 3.9% per annum whereas this growth between 2000 and 2005 was an even more impressive 5.4%. Even though less spectacular, real per capita consumption growth during the 2000–2005 period was also strong at 3.9% per annum. Yet, as Deaton and Dreze (2009) indicate, more than 75% of the population has daily per capita calorie consumption below 2100 in urban areas and 2400 in rural areas. These magnitudes are cited as minimum requirements for Indians.1 When it comes to nutritional deprivation most attention is paid to the major macronutrient—calorie consumption. However, there are reasons to be concerned about the deprivation of the other macronutrient (protein) and various micronutrients. Apart from the consequences of such deprivation for health and well-being, there is evidence (Jha, Gaiha, & Sharma, 2009) to support the contention that this deprivation is actually leading to a poverty nutrition trap where low nutrition leads to low productivity which leads to low wages and then to low nutrition, thus completing a vicious cycle. In view of this, it arguably becomes important to understand the impact of various anti-poverty interventions on nutrition. This task can only be accomplished using household level data on consumption in a context where specific anti-poverty programs are operative. This paper is addressed to this topic. We empirically model the impact of two key policy interventions (the recent National Rural Employment Guarantee Program (NREG) and, the much older but recently revamped, Public Distribution System (PDS)) in the rural sector of three states in India: Rajasthan, Maharashtra and Andhra Pradesh (henceforth AP). The former represents a direct transfer of purchasing power whereas the latter involves an indirect transfer.2 Our contribution in this paper is four fold. First, using primary household level data, collected by a team led by the authors during 2007–08, we examine the nutritional status of rural households in three Indian states: AP, Maharashtra and Rajasthan with respect to the two macronutrients (calories and protein) as well as various micronutrients. Second, we estimate the impact of two key policy initiatives (NREG and PDS) on the nutritional status of rural Indians. Third, we report impact coefficients of a policy intervention, which in our view can serve as a useful guide for future policy on anti-poverty programs and nutrition. Finally, we assess the impact on the headcount index of undernutrition of a (hypothetical) transfer of income (proxied by real expenditure) through these interventions. To the best of our knowledge, this is the first study to compare the nutritional impact of these two policy initiatives in particular and of direct and indirect transfers in general. The literature on the nutritional impact of anti-poverty programs is rather sparse. A somewhat dated but detailed analysis of the impact of the PDS on calorie intake and its cost-effectiveness is Radhakrishna, Subbarao, Indrakant, and Ravi (1997). Another notable contribution is Narayana, Srinivasan, and Parikh (1991) which assesses the cost-effectiveness of PDS and rural public works but stops short of analyzing their nutritional impact. Our study seeks to fill this rather large gap. This paper is related to a large literature on workfare programs. Much of it is, however, focused on its targeting (Besley and Coate, 1992, Gaiha, 2000, Jha et al., 2009a and Ravallion and Datt, 1995). This paper is also linked to a large literature on poverty nutrition traps. The effect of nutritional intake on labour productivity and wage rates has been an important area of research for health economists and nutritionists for some time. This found initial expression in the form of the efficiency wage hypothesis developed by Leibenstein (1957) and Mazumdar (1959), and was formalized and extended by Dasgupta and Ray, 1986 and Dasgupta and Ray, 1987 and Dasgupta (1993), Mirrlees (1975), among others. Early surveys include Bliss and Stern, 1978a and Bliss and Stern, 1978b and Bisnwanger and Rosenzweig (1984). Jha, Gaiha et al. (2009) offer an empirical validation with an all-India household survey. The link of this literature to the present paper lies in the possibility that policy interventions may have nutritional benefits which lead to productivity gains and thus result in more sustained reduction in deprivation and escape from poverty nutrition traps. This is particularly important as a recent report of a committee established by the Government of India, the Tendulkar Committee report on Poverty (2009), has sought to delink estimation of poverty from calorie norms. In fact, India's progress in poverty reduction leads to dramatically different conclusions depending on whether the focus is on consumption poverty or the more pervasive nutritional deprivation.3 The plan of this paper is as follows. In Section 2, we describe the data and methodology. Section 3 presents and discusses the results and Section 4 concludes.

Using primary data collected during 2007–08 this paper has examined the nutritional status with respect to the two macronutrients (calories and protein) as well as various micronutrients of rural households in three Indian states: AP, Maharashtra and Rajasthan. It was found that, by and large, there are serious deficiencies in regard to consumption of various nutrients in all three states. With this as background, we modelled the impact of two policy interventions (NREG and PDS) on nutrient intake. Apart from OLS, IV estimation for each nutrient for each state and systems estimation for each nutrient for all states were conducted. In many cases, we found significant effects of the two policy interventions on nutrient intakes. The impact effects of a change in the policy measures were also computed and found to vary by nutrient and by state. Finally, in order to assess the impact on an index of undernutrition, both the nutrient-expenditure relation and how the proportion of undernourished vary must be taken into account. Although the results vary with the nutrient and state, in some cases the reduction in the headcount index is non-negligible. So an important policy prescription of this paper is that a preoccupation with the nutrient-expenditure relation could be misleading. The paper further underscores the necessity of identifying the principal types of nutritional deprivation in particular areas and quantifying the responsiveness of such deprivation to specific anti-policy interventions. A useful extension of the analysis, but outside the scope of this paper, would take into account the cost effectiveness of reducing undernutrition through NREG and PDS.