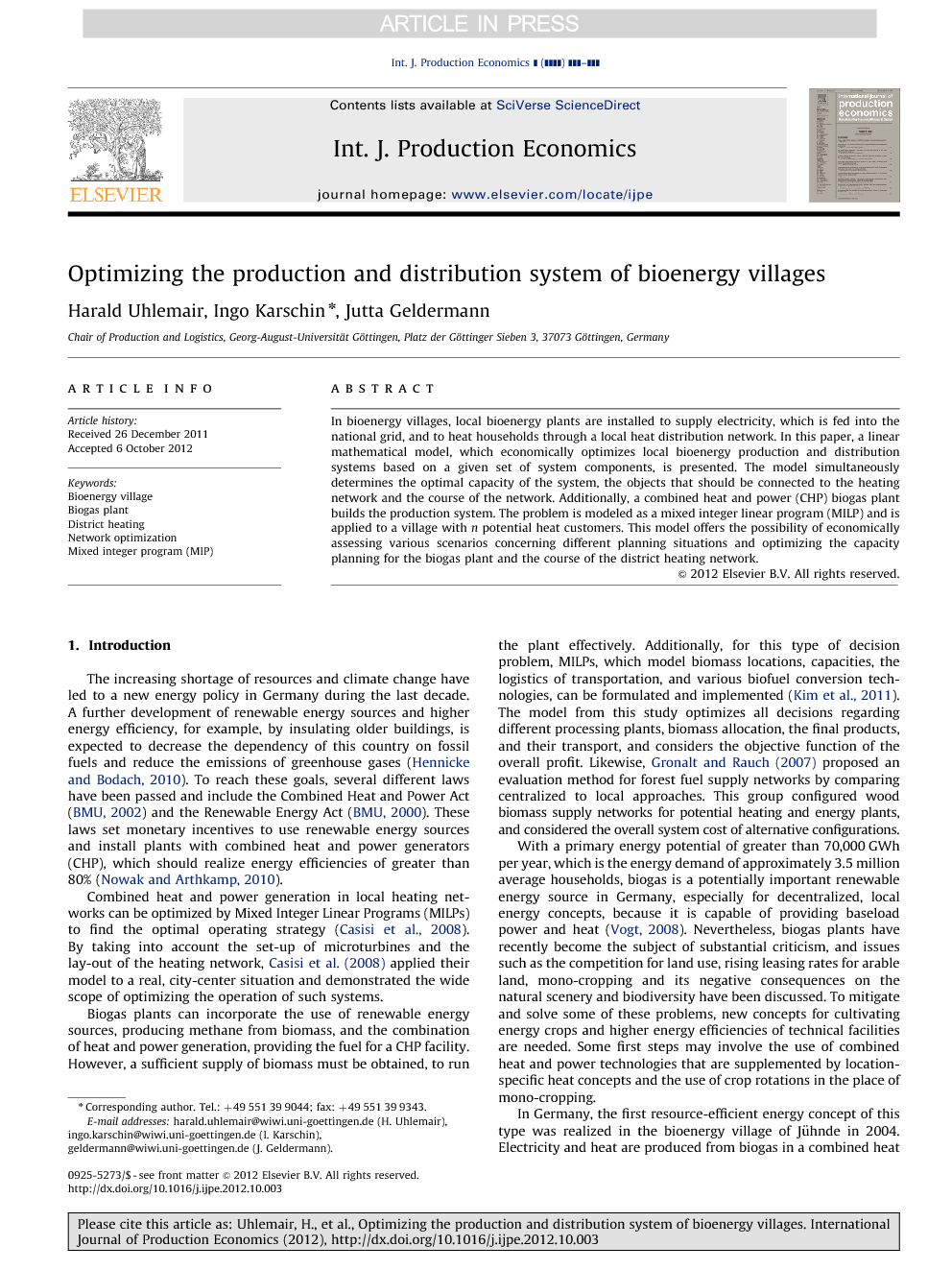 In bioenergy villages, local bioenergy plants are installed to supply electricity, which is fed into the national grid, and to heat households through a local heat distribution network. In this paper, a linear mathematical model, which economically optimizes local bioenergy production and distribution systems based on a given set of system components, is presented. The model simultaneously determines the optimal capacity of the system, the objects that should be connected to the heating network and the course of the network. Additionally, a combined heat and power (CHP) biogas plant builds the production system. The problem is modeled as a mixed integer linear program (MILP) and is applied to a village with n potential heat customers. This model offers the possibility of economically assessing various scenarios concerning different planning situations and optimizing the capacity planning for the biogas plant and the course of the district heating network.

The increasing shortage of resources and climate change have led to a new energy policy in Germany during the last decade. A further development of renewable energy sources and higher energy efficiency, for example, by insulating older buildings, is expected to decrease the dependency of this country on fossil fuels and reduce the emissions of greenhouse gases (Hennicke and Bodach, 2010). To reach these goals, several different laws have been passed and include the Combined Heat and Power Act (BMU, 2002) and the Renewable Energy Act (BMU, 2000). These laws set monetary incentives to use renewable energy sources and install plants with combined heat and power generators (CHP), which should realize energy efficiencies of greater than 80% (Nowak and Arthkamp, 2010). Combined heat and power generation in local heating networks can be optimized by Mixed Integer Linear Programs (MILPs) to find the optimal operating strategy (Casisi et al., 2008). By taking into account the set-up of microturbines and the lay-out of the heating network, Casisi et al. (2008) applied their model to a real, city-center situation and demonstrated the wide scope of optimizing the operation of such systems. Biogas plants can incorporate the use of renewable energy sources, producing methane from biomass, and the combination of heat and power generation, providing the fuel for a CHP facility. However, a sufficient supply of biomass must be obtained, to run the plant effectively. Additionally, for this type of decision problem, MILPs, which model biomass locations, capacities, the logistics of transportation, and various biofuel conversion technologies, can be formulated and implemented (Kim et al., 2011). The model from this study optimizes all decisions regarding different processing plants, biomass allocation, the final products, and their transport, and considers the objective function of the overall profit. Likewise, Gronalt and Rauch (2007) proposed an evaluation method for forest fuel supply networks by comparing centralized to local approaches. This group configured wood biomass supply networks for potential heating and energy plants, and considered the overall system cost of alternative configurations. With a primary energy potential of greater than 70,000 GWh per year, which is the energy demand of approximately 3.5 million average households, biogas is a potentially important renewable energy source in Germany, especially for decentralized, local energy concepts, because it is capable of providing baseload power and heat (Vogt, 2008). Nevertheless, biogas plants have recently become the subject of substantial criticism, and issues such as the competition for land use, rising leasing rates for arable land, mono-cropping and its negative consequences on the natural scenery and biodiversity have been discussed. To mitigate and solve some of these problems, new concepts for cultivating energy crops and higher energy efficiencies of technical facilities are needed. Some first steps may involve the use of combined heat and power technologies that are supplemented by location-specific heat concepts and the use of crop rotations in the place of mono-cropping. In Germany, the first resource-efficient energy concept of this type was realized in the bioenergy village of Jühnde in 2004. Electricity and heat are produced from biogas in a combined heat and power generator. Liquid manure and crops, which are cultivated from the agricultural land around the village, are the feedstock for the generation of biogas in an anaerobic digestion plant. The resulting electricity is then fed into the national electricity grid. To transport heat to villagers, a local hot water grid is installed (Ruppert, 2008).1 In this context, the following questions on production planning and logistics arise: What is the optimal course of the heating network, which potential heat customers should be connected to this network, and what capacity for the energy station should be installed? To answer these questions, an optimization model has been developed, that is composed of the CHP biogas plant as a production system and the local pipeline network as the distribution system that supplies the heat to customers. Building legislation, physical restrictions, and other political regulations are not taken into consideration. However, the costs of installation, maintenance and operation, and the expected revenues from selling heat to local customers and feeding electricity into the national grid are incorporated into the model. The model presented in this paper can be widely adjusted and allows for the representation of many different planning situations. It can be used to support decision-making during the strategic planning of an investment in local heating systems and offers the possibility to calculate an economic benchmark for any biogas plant, which is combined with a heating network, optimizing its course and the capacity of the plant. Furthermore, the model can compare various scenarios regarding, for example, the biomass availability or the willingness of households to be connected to the local heating grid. It thereby offers valuable information for potential investors and relevant stakeholders during the process of planning the installation of such a facility. The next section presents the general set-up of a district heating system based on the biomass. In Section 3, the cost for biomass allocation is estimated. In 4 and 5, the energy production and distribution systems are explained and economically assessed. In 6 and 7, the optimization model is shown and applied to a village with n=44 potential heat customers. In Section 8, various conclusions are drawn and further steps for improving the model are discussed. The last section summarizes the results.