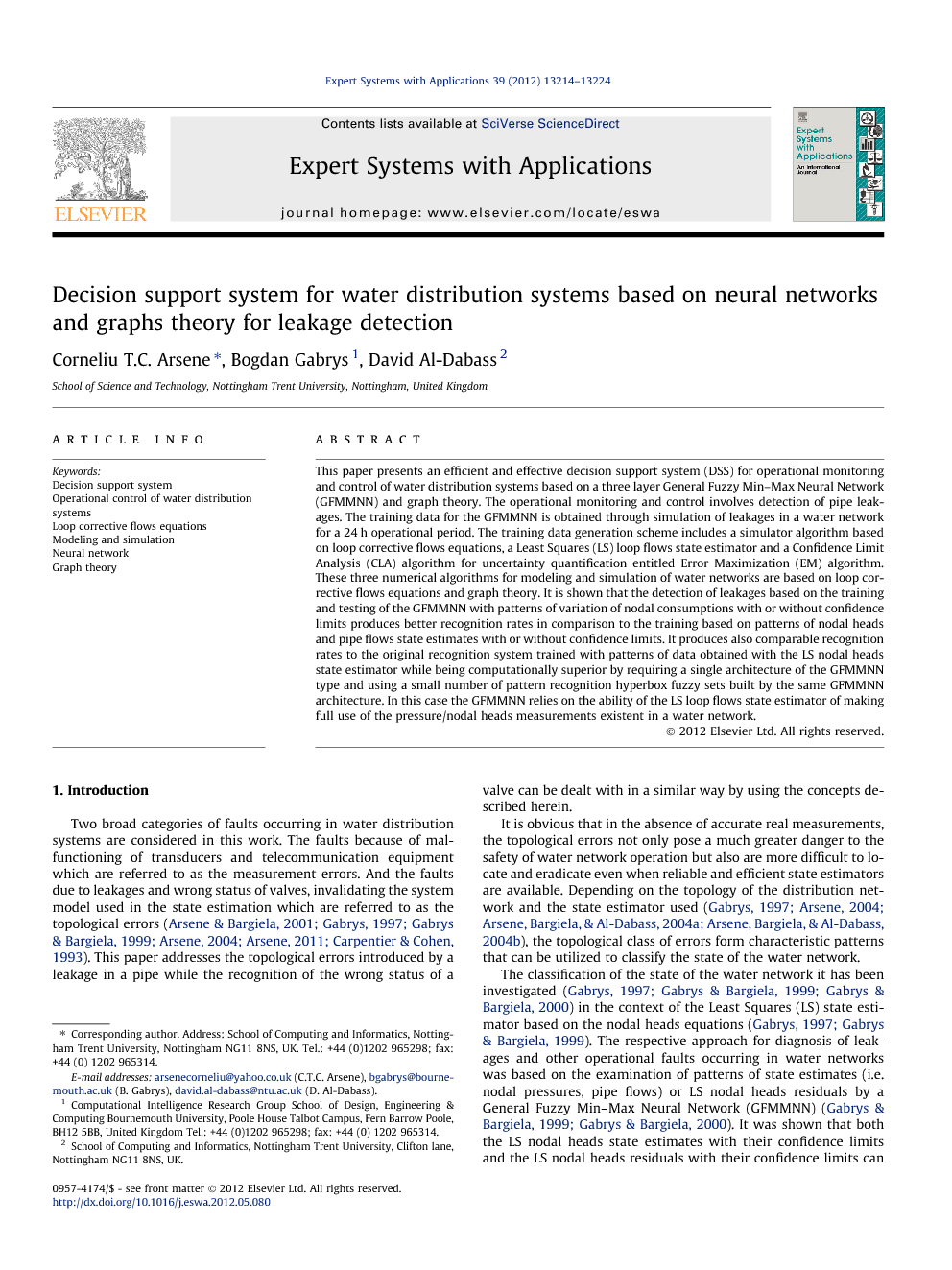 This paper presents an efficient and effective decision support system (DSS) for operational monitoring and control of water distribution systems based on a three layer General Fuzzy Min–Max Neural Network (GFMMNN) and graph theory. The operational monitoring and control involves detection of pipe leakages. The training data for the GFMMNN is obtained through simulation of leakages in a water network for a 24 h operational period. The training data generation scheme includes a simulator algorithm based on loop corrective flows equations, a Least Squares (LS) loop flows state estimator and a Confidence Limit Analysis (CLA) algorithm for uncertainty quantification entitled Error Maximization (EM) algorithm. These three numerical algorithms for modeling and simulation of water networks are based on loop corrective flows equations and graph theory. It is shown that the detection of leakages based on the training and testing of the GFMMNN with patterns of variation of nodal consumptions with or without confidence limits produces better recognition rates in comparison to the training based on patterns of nodal heads and pipe flows state estimates with or without confidence limits. It produces also comparable recognition rates to the original recognition system trained with patterns of data obtained with the LS nodal heads state estimator while being computationally superior by requiring a single architecture of the GFMMNN type and using a small number of pattern recognition hyperbox fuzzy sets built by the same GFMMNN architecture. In this case the GFMMNN relies on the ability of the LS loop flows state estimator of making full use of the pressure/nodal heads measurements existent in a water network.

The assumption that fault diagnosis can be based on pattern analysis without a need to employ any heuristic or specialist knowledge has been again highlighted within the context of patterns of LS loop flows equations state estimates and confidence limits and patterns of variation of nodal demands and confidence limits. First, it has been shown that the LS loop flows state estimates can be successfully used to train the neural recognition system. Slightly higher misclassification rates have been obtained when compared to the training of the recognition system with the state estimates obtained with the LS nodal heads state estimator. This is because of smaller separation of patterns obtained with the LS loop flows state estimator representing different classes (topological errors, operational time periods) and due to a much higher ratio of the sensitivity of the nodal heads to the existing set of pressure measurements in the case of the LS loop flows state estimator. Second, the recognition system based on confidence limits for the LS loop flows state estimates performed better for the data for which it was trained. However, this came at the expense of a high number of hyperboxes necessary to cover the space of input patterns. The classification of the water network state based on patterns of variation of load measurements and confidence limits gave the best results. The neural network used for fault detection and identification in this last case was essentially a simpler version of the recognition system used in the first two cases. It consisted of a single GFMMNN architecture of the type shown at Fig. 6, which was used for the entire 24 h period of operations of the water network. The overlapping was solved in a robust way. This was because the presence of topological error of different magnitudes reflected in the variation of the nodal demands which sprung up the hyperboxes from the zero reference point representing the normal operating point for the entire 24 h operational period. The GFMMNN relied on the ability of the LS loop flows state estimator of making full use of the pressure/nodal heads measurements existent in the water network which resulted in the respective variations of nodal demands. While the overlappings could be resolved in a robust manner, it also kept the number of hyperboxes representing different classes to a small number. This is because identical topological errors which were producing at different operational times resulted in similar variations of the nodal consumptions, which in turn were represented by the same hyperbox.