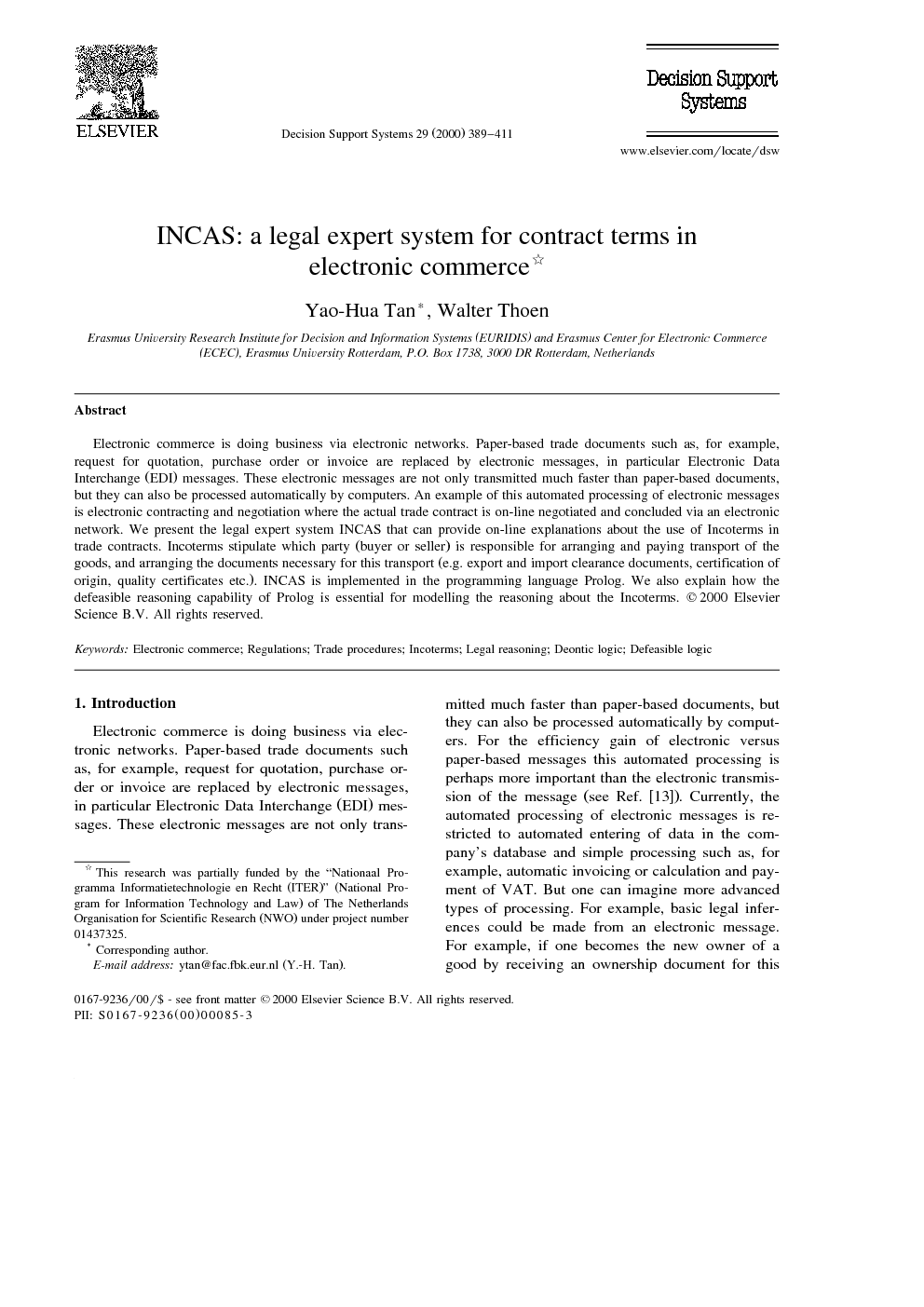 Electronic commerce is doing business via electronic networks. Paper-based trade documents such as, for example, request for quotation, purchase order or invoice are replaced by electronic messages, in particular Electronic Data Interchange (EDI) messages. These electronic messages are not only transmitted much faster than paper-based documents, but they can also be processed automatically by computers. An example of this automated processing of electronic messages is electronic contracting and negotiation where the actual trade contract is on-line negotiated and concluded via an electronic network. We present the legal expert system INCAS that can provide on-line explanations about the use of Incoterms in trade contracts. Incoterms stipulate which party (buyer or seller) is responsible for arranging and paying transport of the goods, and arranging the documents necessary for this transport (e.g. export and import clearance documents, certification of origin, quality certificates etc.). INCAS is implemented in the programming language Prolog. We also explain how the defeasible reasoning capability of Prolog is essential for modelling the reasoning about the Incoterms.

An expert system like INCAS can be used as an assistant to those electronic commerce users that are little or not at all acquainted with current business practice. Incoterms have been highlighted as being appropriately ready to use in forms of electronic commerce, like EDI [25]. The widespread ability to conduct electronic commerce should be matched with spreading tools that make it safe and secure to users to transact so. An on-line trader can combine his automated ordering system with information that INCAS provides to select the most appropriate Incoterm for the case and conclude the transaction. In electronic commerce, Incoterms prevail as global terms that can be used for international transactions and that are readily available to the users. INCAS diminishes the gap between comprehending and using the most appropriate Incoterm. In open electronic commerce spreading information can assist more potential users to transact in an open global market. A specialised system like INCAS can become more effective if integrated in an automated information retrieval and legal expert system that supports electronic commerce transactions. In the context of electronic commerce, INCAS is also significant as a working prototype to formalise the recognised practice terms when the ETERMS Repository becomes available. From the ETERMS perspective the experience of analysing and reasoning about Incoterms is valuable. It would be interesting to link together the recognised practice terms and Incoterms to provide integrated information to individual users of electronic commerce. INCAS can be seen as a template for structuring and representing similar legal domains. We also analysed which role defeasible reasoning plays in the representation of Incoterms. We showed that there are many interesting examples of defeasibility in Incoterms. There were even examples of defeasibility with exceptions to exceptions. The general rule, under the FOB term, that the buyer is liable for damage on the open sea, can be overruled by the exception that the seller did not package the goods properly. But this exception can be overruled by another exception that the seller did not package properly, because he was not informed adequately by the buyer about extreme transport conditions of the goods. In the Prolog implementation of INCAS it was shown in detail how the negation-by-failure of Prolog was essential to model these different types of defeasibility in Incoterms.