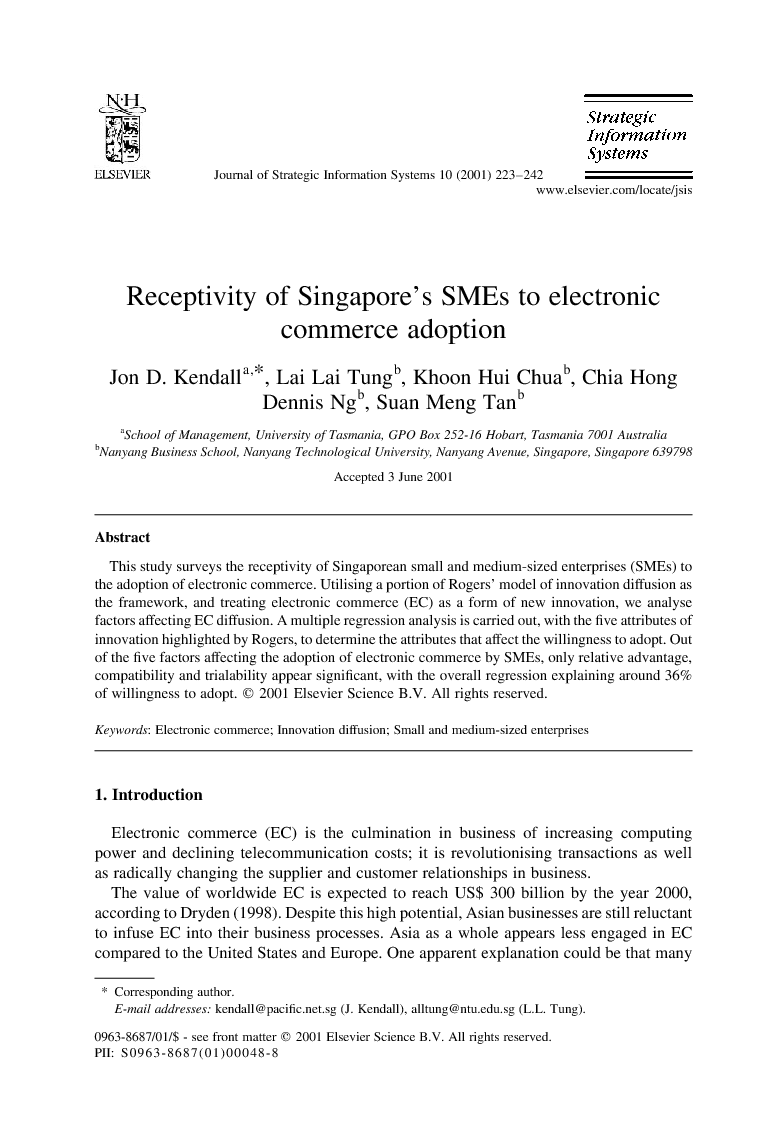 This study surveys the receptivity of Singaporean small and medium-sized enterprises (SMEs) to the adoption of electronic commerce. Utilising a portion of Rogers' model of innovation diffusion as the framework, and treating electronic commerce (EC) as a form of new innovation, we analyse factors affecting EC diffusion. A multiple regression analysis is carried out, with the five attributes of innovation highlighted by Rogers, to determine the attributes that affect the willingness to adopt. Out of the five factors affecting the adoption of electronic commerce by SMEs, only relative advantage, compatibility and trialability appear significant, with the overall regression explaining around 36% of willingness to adopt.

Results of this study have implications for researchers who are interested in looking at inhibitors and motivators to EC. One of the most important findings is that the five attributes studied actually explained 36% of the variance to the willingness to adopt. Moreover, significant coefficients for relative advantage and compatibility dovetailed roughly with SME cross-country findings by OECD (1998). Although beyond the scope of this study, it would be interesting to develop a more detailed analysis based on Rogers' complete framework (see Fig. 1) or at least a more complete operationalisation (see Tan and Teo, 2000). It would also be interesting to study the same phenomenon at a macro-level or policy level instead of a firm level. (For example, see studies on the impact of environmental factors, industrial policy, and industry structure on IT diffusion ( Dedrick and Kraemer, 1995, Dedrick and Kraemer, 1998 and Dedrick et al., 1995). For SMEs, the compatibility issue is significant because it deals with their perception of the importance of EC on their businesses now and in the future. Although almost 80% of SMEs agree that EC will be important for them in the future, they may not understand what EC is about and its importance now. Studies in Singapore have indicated that top management generally does not understand what EC is all about (Gilbert et al., 1999a, Gilbert et al., 1999b and Gilbert et al., 1999c). This lack of understanding extends to many areas, but most importantly to SMEs' understanding of the new EC business model as it pertains to their business. In addition, these studies also show that they prefer to be followers rather than leaders in the adoption of EC technologies (Gilbert et al., 1999a, Gilbert et al., 1999b and Gilbert et al., 1999c). This lack of understanding could have led them to discount the impact of EC and led them to believe that they will have plenty of time to ‘adopt’ EC. Moreover, it can be seen that SMEs are most motivated by the prospects of gaining a relative advantage over other businesses. They generally believe that EC can open up the market for them, as well as lower their business costs. This perception influenced their willingness to adopt EC. On the flip side, it can be said that if companies do not believe EC can provide them a relative advantage, then their motivation to adopt will be low. Therefore, more needs to be done to address the issue of enticing SMEs to see the potential of EC. Recent media coverage on the potential size and importance of the EC market is a helpful start (NCB. 1999 and Yap, 1999). Not only do SMEs need to understand the potential size of the market, but they must also believe that engagement will reap relative advantage. In other words, they need to perceive that benefits of EC will outweigh the costs of EC. One way of achieving this is to help them engage in EC with minimal investment and costs. There are at present various incentives by the Government and private sector (NCB, 1998b and Wong, 1997), and several incubation programs are already in place (Wee, 2000). However, more needs to be done to reduce the cost of adopting EC if it is to gain critical mass quickly within Singapore.