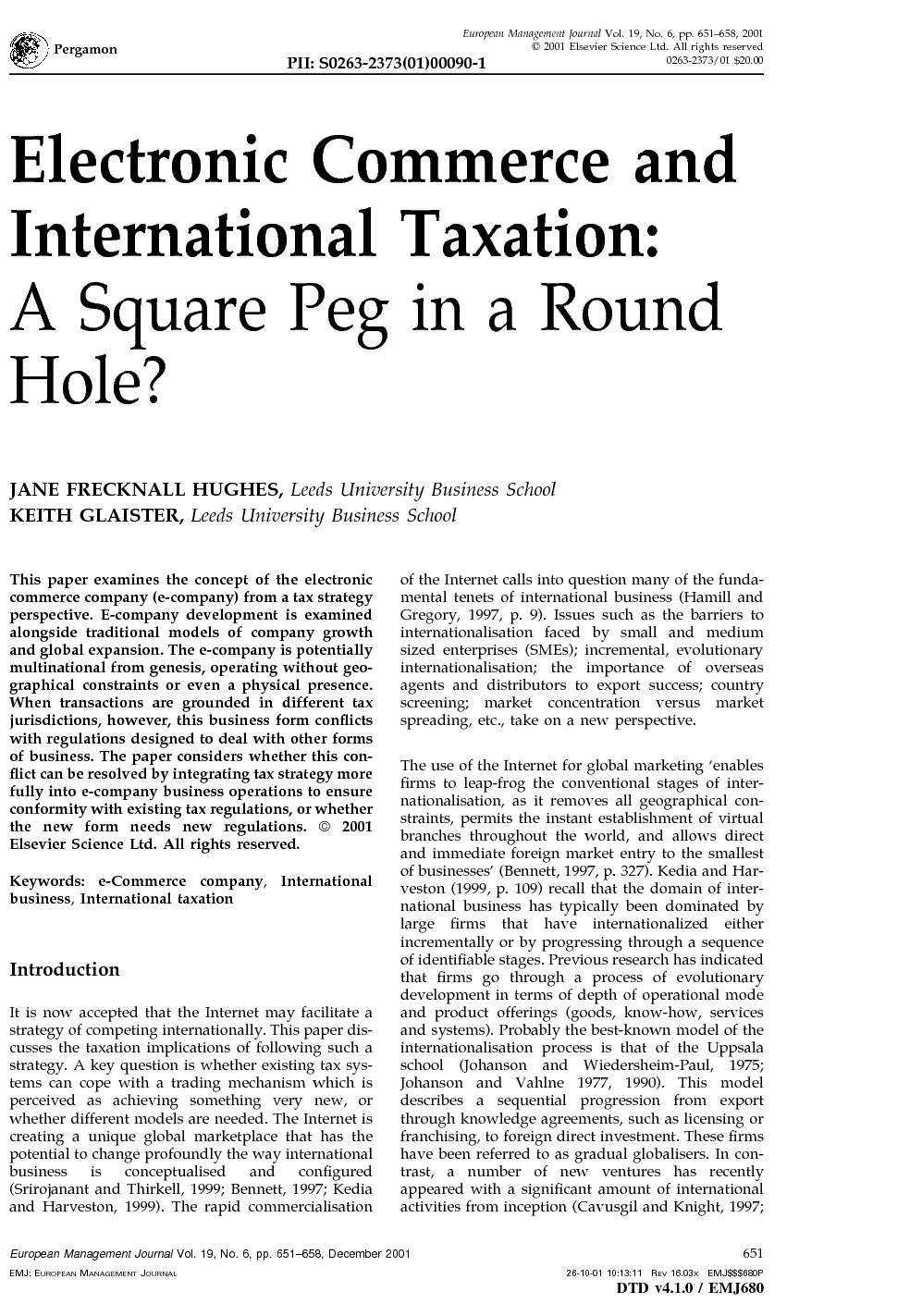 This paper examines the concept of the electronic commerce company (e-company) from a tax strategy perspective. E-company development is examined alongside traditional models of company growth and global expansion. The e-company is potentially multinational from genesis, operating without geographical constraints or even a physical presence. When transactions are grounded in different tax jurisdictions, however, this business form conflicts with regulations designed to deal with other forms of business. The paper considers whether this conflict can be resolved by integrating tax strategy more fully into e-company business operations to ensure conformity with existing tax regulations, or whether the new form needs new regulations.

It is now accepted that the Internet may facilitate a strategy of competing internationally. This paper discusses the taxation implications of following such a strategy. A key question is whether existing tax systems can cope with a trading mechanism which is perceived as achieving something very new, or whether different models are needed. The Internet is creating a unique global marketplace that has the potential to change profoundly the way international business is conceptualised and configured (Srirojanant and Thirkell, 1999, Bennett, 1997 and Kedia and Harveston, 1999). The rapid commercialisation of the Internet calls into question many of the fundamental tenets of international business (Hamill and Gregory, 1997, p. 9). Issues such as the barriers to internationalisation faced by small and medium sized enterprises (SMEs); incremental, evolutionary internationalisation; the importance of overseas agents and distributors to export success; country screening; market concentration versus market spreading, etc., take on a new perspective. The use of the Internet for global marketing ‘enables firms to leap-frog the conventional stages of internationalisation, as it removes all geographical constraints, permits the instant establishment of virtual branches throughout the world, and allows direct and immediate foreign market entry to the smallest of businesses’ (Bennett, 1997, p. 327). Kedia and Harveston (1999, p. 109) recall that the domain of international business has typically been dominated by large firms that have internationalized either incrementally or by progressing through a sequence of identifiable stages. Previous research has indicated that firms go through a process of evolutionary development in terms of depth of operational mode and product offerings (goods, know-how, services and systems). Probably the best-known model of the internationalisation process is that of the Uppsala school (Johanson and Wiedersheim-Paul, 1975, Johanson and Vahlne, 1977 and Johanson and Vahlne, 1990). This model describes a sequential progression from export through knowledge agreements, such as licensing or franchising, to foreign direct investment. These firms have been referred to as gradual globalisers. In contrast, a number of new ventures has recently appeared with a significant amount of international activities from inception (Cavusgil and Knight, 1997 and Oviatt and McDougall, 1995). These organisations have been referred to as ‘born global’ firms. There is a clear sense in which Internet-based strategies permit SMEs to be born global. Hamill and Gregory (1997) consider it is a legitimate question to ask whether the slow, evolutionary stages of development approach to internationalisation remains valid when Internet technology and the WWW provide SMEs with a low-cost ‘gateway’ to global markets. In terms of taxation, the impact of this development and the speed at which it has occurred is significant. In the past, national revenue jurisdictions had time to react to slowly occurring changes and implement taxation policies and statutes to deal with them in a timely manner. Often any jurisdiction had only to consider its own needs. In a time of fast-developing technical changes, a revenue authority lags behind. It takes considerable time to formulate policy and establish it within a legal framework. By the time this has been done, the new law could have been overtaken by further innovations, which could require yet further statute to address their taxation implications. Moreover, e-commerce by nature is multi-jurisdictional, so a national taxing authority must necessarily consider its interfaces with other jurisdictions more prominently than before. The rest of the paper is organised as follows. The following section examines extant taxation theory within the context of e-commerce. The third section examines reasons for considering e-commerce as conceptually the same as trade by other means, together with current world-wide experiences. The fourth section looks at conceptual differences, going on to consider especially US perspectives and the potential for exploiting differences. Conclusions are in the final section.

The Internet has radically altered the potential for international business development. The ways in which e-commerce continue to evolve will be crucial for tax considerations. It seems as if tax authorities generally are willing to wait a while to make sure that any statute changes they make can deal with future developments, even if these appear somewhat nebulous at present. It really depends on one's standpoint as to whether e-commerce is seen as being or producing something new, which requires separate tax regulations. In terms of theoretical considerations, the current situation must be regarded as unsatisfactory. First of all, there is now a need for tax jurisdictions to take an international perspective as well as their customary national one. While this is something that has been gradually developing with the increasing globalisation of business, until the development of the Internet it has not been necessary for jurisdictions to the degree it is now. Because of this, the theoretical considerations underlying imposition of taxation must likewise be looked at internationally. It must be remembered that world-wide, business is in transition. Not everyone is currently doing business via the Web, and while there is a move towards this, no one is as yet able to say just how far this will develop. In terms of equity, not all entities are treated the same. A US company selling internally on the Web would be in a better position than one located in the UK, selling from a bricks and mortar store. This also undercuts the concept of neutrality, and effectiveness/efficiency: the US misses out on collecting large sums of tax. The Boulez case reveals that, depending on where one resides, income might be differently classified, and taxed, which seems inequitable, and produces uncertainty. Until a case comes before a court, one might not know how much tax one might be obliged to pay. In addition such procedures induce a feeling of uncertainty in both the payer and the collector of taxes, and would certainly create inconvenience for all concerned. It almost goes without saying that the current situation is complex in the extreme, but, ironically, because of all the inherent imperfections, it does allow for flexibility. This is not because individual countries' tax systems can cope with e-commerce complications, but because tax planners can exploit uncertainties and inconsistencies so that their clients can benefit. Referring back to the title of this article, whether or not one regards e-commerce as a conceptually different way of doing business requiring different tax regulations, currently the way forward seems to be to make the square peg (=e-commerce) fit into a hole (=tax systems nationally) regardless of the shape of the hole (see also Ogley, 2001). Depending on one's perspective, the hole might be more square than round – and pressure may need to be applied to keep the peg square, or the definition of ‘square’ may need to be amended slightly. Conceptual considerations apart, if this approach is not adopted, what else is practical? It is hardly a realistic proposition for each country to scrap its tax laws entirely and start again from scratch. Apart from being a recipe for fiscal chaos, new laws when first drafted are often bedevilled by loopholes, which the clever (and unscrupulous) can exploit. Cases may now come before the courts in an attempt to clarify how nebulous e-commerce issues should be better defined and/or taxed, but almost certainly there would be more if new laws were to be written from first principles to deal with e-commerce. The existing national systems will have to remain and develop to deal with new situations, as they have always done, possibly by new statutes, definitions, and case law acting as precedent. The latter particularly is a tested, traditional way of dealing with issues about which no (clear) legislation exists.