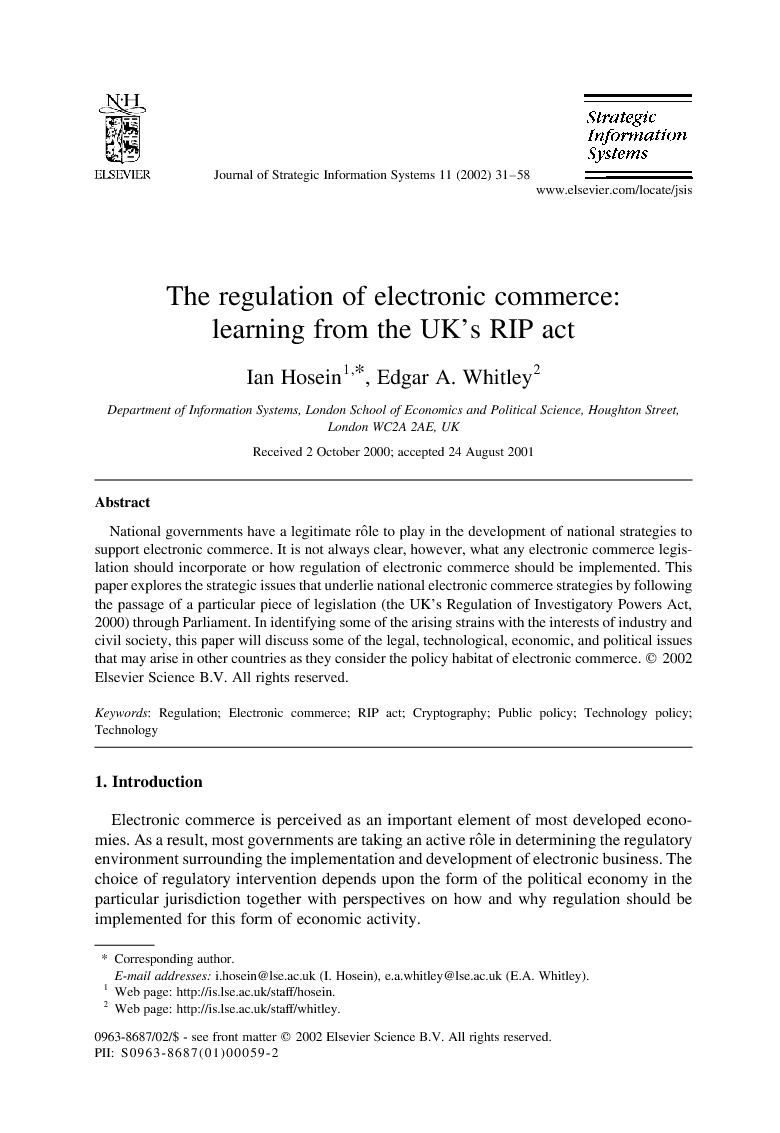 Electronic commerce is perceived as an important element of most developed economies. As a result, most governments are taking an active rôle in determining the regulatory environment surrounding the implementation and development of electronic business. The choice of regulatory intervention depends upon the form of the political economy in the particular jurisdiction together with perspectives on how and why regulation should be implemented for this form of economic activity. This paper seeks to explore the complexity of developing a regulatory environment or habitat (Hood, 1994) for electronic commerce. It does this by focussing on a particular piece of legislation from the UK, the Regulation of Investigatory Powers (RIP) Bill that received the Royal Assent on July 28th 2000. This can be seen as one of the strategic measures undertaken by the British government in an effort to provide a level playing field for electronic commerce in the UK. The Bill was one of the most highly contested pieces of legislation to be placed before the British Parliament in recent years. From the outset, the government argued that it was well thought out, having been the result of detailed engagement with ‘serious commentators’ (Clarke, 2000b). However, the business community, and privacy advocates, undertook a major political activity to try and change the legislation in a number of its key areas, suggesting that despite the best efforts of the government, there were still many viewpoints on the process that hadn't been understood properly or taken into account fully. The controversy surrounding the introduction of this piece of legislation indicates the inherent complexities surrounding the regulatory habitat (Hood, 1994) for electronic commerce. The Bill highlighted the conflicting requirements of secure communication and access requirements of law enforcement agencies; the problems of legislating in a rapidly changing technological environment; the need to minimise the costs and risks of any proposed legislation; the goal of maintaining the human rights of those affected by the legislation; and doing all this in a global context. In order to understand these issues the paper draws on theories of regulation. Research on regulation typically seeks to address three main questions: Why is regulation introduced for an area? How is the form of the regulatory intervention determined? How is the process of introducing and implementing the regulation managed? This paper presents the case of the British governments' attempts to arrive at a regulatory regime, and how the strategies shifted due to conflicts and opposition. This is particularly observable within the process of passing the RIP Bill, which is then investigated in detail, through analysis of public discourse and parliamentary Hansard. Section 2 reviews the traditional arguments for government intervention through regulation and introduces the key issues that any understanding of regulation must address. Some initial responses to these issues are then presented, before reviewing the broader context of policy making on cryptography in the UK. This policy debate led to the RIP Bill and the paper then reviews the decisions made about the research method before describing the Bill in Parliament and the issues it raised. Through a presentation of the Parliamentary debate, the paper highlights those areas of the Bill that were changed and the reasoning behind the changes, together with those aspects that were left unchanged despite protestation. The paper ends with a discussion of the lessons learned about the regulation of electronic commerce from the experience of the RIP Bill.