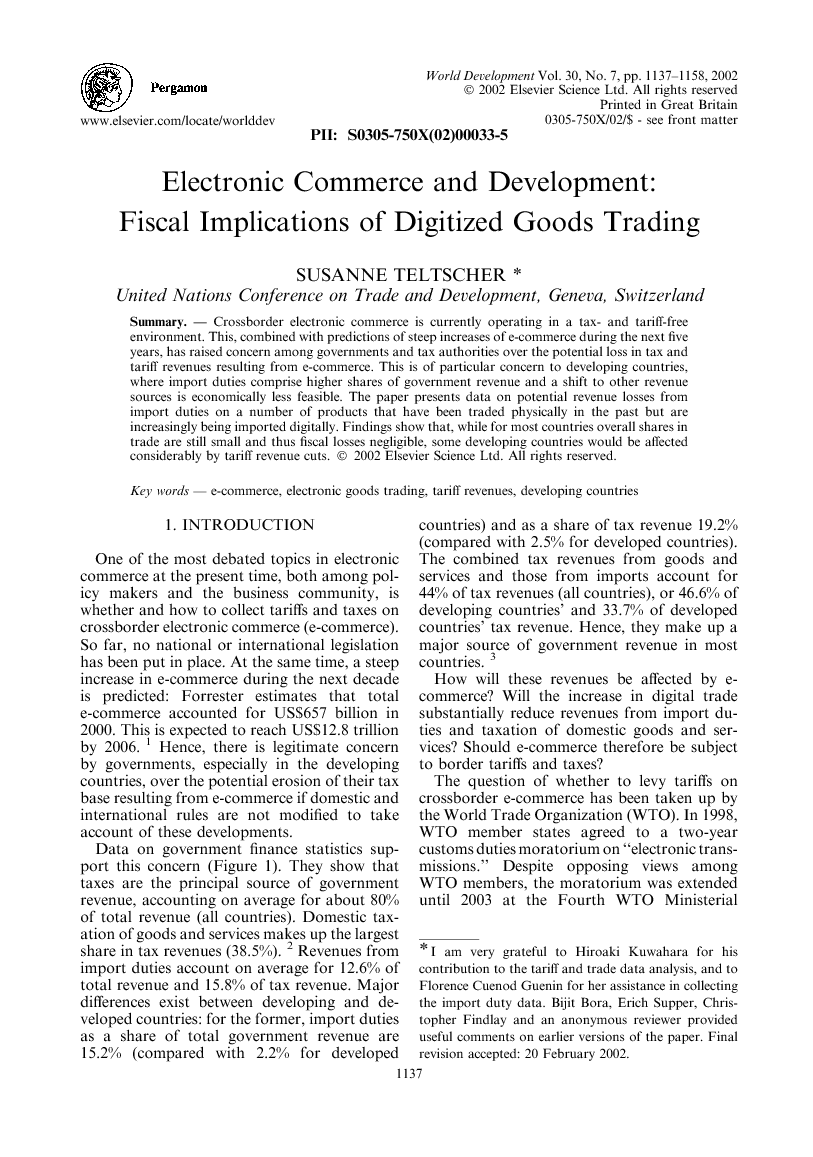 Crossborder electronic commerce is currently operating in a tax- and tariff-free environment. This, combined with predictions of steep increases of e-commerce during the next five years, has raised concern among governments and tax authorities over the potential loss in tax and tariff revenues resulting from e-commerce. This is of particular concern to developing countries, where import duties comprise higher shares of government revenue and a shift to other revenue sources is economically less feasible. The paper presents data on potential revenue losses from import duties on a number of products that have been traded physically in the past but are increasingly being imported digitally. Findings show that, while for most countries overall shares in trade are still small and thus fiscal losses negligible, some developing countries would be affected considerably by tariff revenue cuts.

One of the most debated topics in electronic commerce at the present time, both among policy makers and the business community, is whether and how to collect tariffs and taxes on crossborder electronic commerce (e-commerce). So far, no national or international legislation has been put in place. At the same time, a steep increase in e-commerce during the next decade is predicted: Forrester estimates that total e-commerce accounted for US$657 billion in 2000. This is expected to reach US$12.8 trillion by 2006.1 Hence, there is legitimate concern by governments, especially in the developing countries, over the potential erosion of their tax base resulting from e-commerce if domestic and international rules are not modified to take account of these developments. Data on government finance statistics support this concern (Figure 1). They show that taxes are the principal source of government revenue, accounting on average for about 80% of total revenue (all countries). Domestic taxation of goods and services makes up the largest share in tax revenues (38.5%).2 Revenues from import duties account on average for 12.6% of total revenue and 15.8% of tax revenue. Major differences exist between developing and developed countries: for the former, import duties as a share of total government revenue are 15.2% (compared with 2.2% for developed countries) and as a share of tax revenue 19.2% (compared with 2.5% for developed countries). The combined tax revenues from goods and services and those from imports account for 44% of tax revenues (all countries), or 46.6% of developing countries' and 33.7% of developed countries' tax revenue. Hence, they make up a major source of government revenue in most countries.How will these revenues be affected by e-commerce? Will the increase in digital trade substantially reduce revenues from import duties and taxation of domestic goods and services? Should e-commerce therefore be subject to border tariffs and taxes? The question of whether to levy tariffs on crossborder e-commerce has been taken up by the World Trade Organization (WTO). In 1998, WTO member states agreed to a two-year customs duties moratorium on “electronic transmissions.” Despite opposing views among WTO members, the moratorium was extended until 2003 at the Fourth WTO Ministerial Conference held in Doha, Qatar, from November 9–13, 2001. The broader subject of Internet taxation has been taken up by other fora. A number of proposals are currently being prepared by the Organization for Economic Cooperation and Development (OECD), the European Union (EU) and the United States for harmonizing taxation rules on international e-commerce and thus prevent potential fiscal losses that could result from a rapidly growing number of international on-line suppliers, whose crossborder transactions will be subject to import and domestic taxes. Developing countries are largely left out of these debates. Within the WTO, they have raised concerns about possible tariff revenue implications resulting from a ban on customs duties on electronic transmissions. They lack resources, however, to provide evidence which could support their concerns. Many of them are still struggling to keep up with the rapid developments in the area of e-commerce, recognizing that it has the potential for substantial beneficial effects on their economies.4 The taxation debate is very much dominated by the OECD countries, which have little concern for developing countries' interests, given the latter's small share in e-commerce. But, developing countries could be much more affected by fiscal losses resulting from e-commerce in view of their greater dependence on tariffs and taxes as revenue sources for their national budgets. This paper attempts to bring the developing countries' concerns into the debate on potential fiscal implications of e-commerce by looking at both tariff and tax revenues. Section 2 provides a short overview of the discussion on border tariffs for e-commerce taking place in the WTO. Key to this debate are conceptual and regulatory aspects of imposing customs duties on electronic transmissions. Section 3 looks at Internet taxation issues such as consumption and income taxation and highlights possible implications of current proposals for the developing countries. Section 4 moves to the empirical part of the paper and presents trade data on digitized products, including main importers and exporters as well as recent growth rates. Section 5 calculates import revenues from digitized products, obtained from (a) border tariffs, and (b) other import duties. Based on this, possible revenue losses resulting from electronic goods trading, particularly for the developing countries, will be shown.

This paper has addressed the issue of customs duties related to crossborder e-commerce, from the development point of view. A central question was how significant are fiscal losses from the noncollection of tariffs and taxes if e-commerce replaces traditional trade in goods. The analysis of trade and tariff data showed that trade in digitized products is small (about 1% of world trade) and that revenues from imports of digitized products are small relative to total revenues. It also revealed that the developing countries' share in world tariff revenues from digitized products is disproportionately higher than that of developed countries: while developing countries account for only 18.5% of world imports of digitized products, their share in tariff revenues resulting from these imports is 64.5%. In absolute values, their tariff revenue loss amounts to over US$600 million compared to US$265 million for the developed countries. Developing countries would therefore be primarily concerned should physical delivery of goods be replaced by electronic delivery and no tariffs collected. The extension of the discussion on tariff revenues to include additional import duties and taxes, considerably increases the amount of revenues collected from imports of digitized products (from US$1 billion to over US$8 billion). Both customs surcharges and internal taxes levied on imports are significantly higher than the simple applied tariff rate. If these duties are not collected, and given the rapid growth rates of e-commerce, revenue losses could be felt in all countries. In particular, the calculations of domestic taxes levied on imports demonstrated the significant impact e-commerce could have on tax revenues. In this study, only a small number of goods were considered, but the revenue impact is already considerable. If these calculations were extended to services, which are often subject to consumption taxes and which are the fastest growing e-business activities, the tax base of many countries could be substantially eroded. The fiscal impact of international e-commerce is likely to be felt more strongly in the developing countries: they will face higher losses from customs duties, which make up higher shares in their national budgets compared with the developed countries. They will have less flexibility to replace those losses by shifting to other revenue sources, such as income taxes or social security contributions. In the short to medium term, developing countries will be net importers of e-commerce and hence will run a greater risk of losing tariff and tax revenues if traditional imports are replaced by on-line delivery. Therefore, the development of efficient tax collection systems for e-commerce should be a priority for all developing countries. It is important to keep in mind that the figures presented here are potential and upper bound estimates, based on 1999 data. In reality, most developing countries will continue to trade digitized products physically and only move slowly to digital delivery. E-commerce is still in its infancy stage in most developing countries, which often face poor telecommunications infrastructure, high Internet access costs, low computer literacy, restricted access to electronic payment means (e.g., credit cards), and other barriers that keep them from increasing the use of the Internet and e-commerce. Hence, revenue implications from e-commerce will not be felt immediately in those countries. On the other hand, very high-growth rates of trade in digitized products in the developing countries suggest that the figures calculated here could be substantially higher in the not too distant future. Finally, the figures do not take into consideration trade that is already taking place digitally, since they are based on import/export statistics of physical trade only. Digital delivery may already account for an important share in some developed countries, but it is likely to be very small in most developing countries. What should be the implications of these findings for the extension of the WTO customs moratorium? From a developing country perspective, the immediate advantage of the ban is not clear. Even if there is no immediate harm done to governments' revenues, given that most of the goods concerned will continue to be traded physically in the short to medium term, making the ban binding and indefinite does not seem to be a precondition for the spread of e-commerce. Rather, from the developing country point of view, other issues that ensure the effective liberalization of e-commerce should have priority. These include resolving the classification issue (i.e., the definition of electronic transmissions as goods or services), identifying e-services in which developing countries have export potentials (such as software development, audio-visual products, tourism, data processing and other IT-enabled services) and reviewing national commitments under GATS that concern e-services. Whether zero tariffs would actually increase developing countries' exports on e-commerce goods is not certain. While a decrease in border tariffs is usually followed by an increase in trade, in the case of e-commerce, many developing countries do not have the telecommunications infrastructure or the human resources necessary to develop their e-commerce export capacities. Instead, they may face fiercer competition from outside and a growth of e-commerce imports. On the other hand, the gradual elimination of tariffs on certain electronic goods could have a beneficial effect on some countries' economies. Careful consideration needs to be given here to each product category; for example, a reduction on software products could support domestic investment in high-technology sectors, an important industry for helping developing countries participate in e-commerce. The WTO Information Technology Agreement already covers some of the products that fall under software and media, and other products may and should be included in the near future.