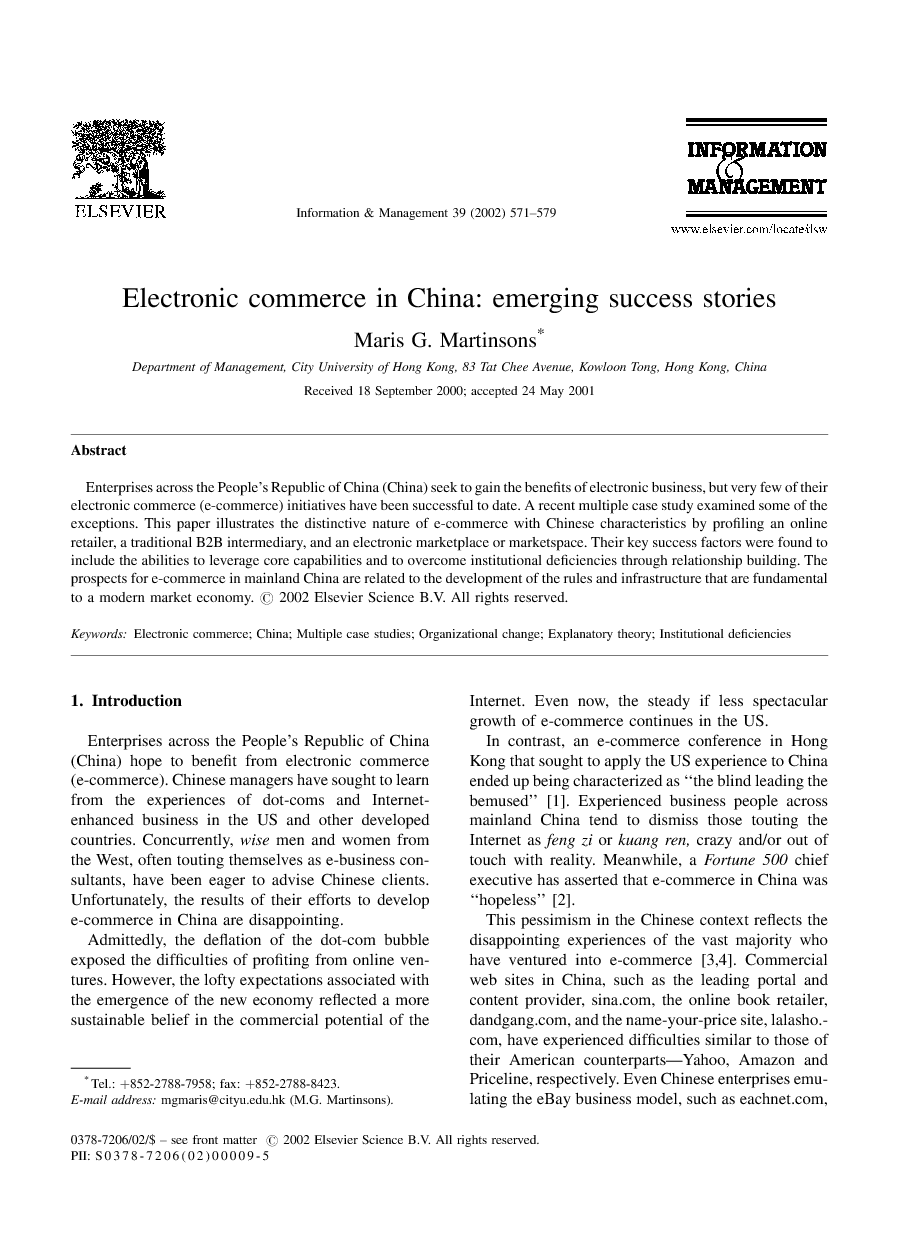 Enterprises across the People’s Republic of China (China) seek to gain the benefits of electronic business, but very few of their electronic commerce (e-commerce) initiatives have been successful to date. A recent multiple case study examined some of the exceptions. This paper illustrates the distinctive nature of e-commerce with Chinese characteristics by profiling an online retailer, a traditional B2B intermediary, and an electronic marketplace or marketspace. Their key success factors were found to include the abilities to leverage core capabilities and to overcome institutional deficiencies through relationship building. The prospects for e-commerce in mainland China are related to the development of the rules and infrastructure that are fundamental to a modern market economy.

Enterprises across the People’s Republic of China (China) hope to benefit from electronic commerce (e-commerce). Chinese managers have sought to learn from the experiences of dot-coms and Internet-enhanced business in the US and other developed countries. Concurrently, wise men and women from the West, often touting themselves as e-business consultants, have been eager to advise Chinese clients. Unfortunately, the results of their efforts to develop e-commerce in China are disappointing. Admittedly, the deflation of the dot-com bubble exposed the difficulties of profiting from online ventures. However, the lofty expectations associated with the emergence of the new economy reflected a more sustainable belief in the commercial potential of the Internet. Even now, the steady if less spectacular growth of e-commerce continues in the US. In contrast, an e-commerce conference in Hong Kong that sought to apply the US experience to China ended up being characterized as “the blind leading the bemused” [1]. Experienced business people across mainland China tend to dismiss those touting the Internet as feng zi or kuang ren, crazy and/or out of touch with reality. Meanwhile, a Fortune 500 chief executive has asserted that e-commerce in China was “hopeless” [2]. This pessimism in the Chinese context reflects the disappointing experiences of the vast majority who have ventured into e-commerce [3] and [4]. Commercial web sites in China, such as the leading portal and content provider, sina.com, the online book retailer, dandgang.com, and the name-your-price site, lalasho.com, have experienced difficulties similar to those of their American counterparts—Yahoo, Amazon and Priceline, respectively. Even Chinese enterprises emulating the eBay business model, such as eachnet.com, have been forced to branch into offline businesses to augment their sagging revenues. Meanwhile, the convenience of many online initiatives is questionable. For example, passengers wishing to use the online ticketing system of China Eastern Airlines had to live in Shanghai, buy a ticket originating from that city, use a credit/debit card from one particular bank, and then pick up their tickets at the airline’s downtown office.

The trials and tribulations of dot-com firms and online ventures by traditional firms all over the world demonstrate the difficulty of doing business on the Internet, and especially doing it profitably. Nevertheless, the development of e-commerce in the US (and other modern market-based economies) has been stimulated by the presence of convenient and inexpensive Internet access, well-developed on-line payment and physical transportation systems, and many affluent consumers. Perhaps most importantly, these market-based economies have comprehensive, impartial and enforceable rules to govern market transactions. Traditional commerce, both at the retail level and between companies, remains comparatively inefficient in mainland China. However, the environment for e-commerce is also very challenging. The personal nature of business relationships, the informality of information, and the lack of separation between political and economic actors are among the factors inhibiting and shaping the development of B2B e-commerce in China. Meanwhile, Chinese consumers, who have no tax incentives to shop online and little legal recourse if the transaction goes wrong, will be reluctant to abandon traditional marketplaces where they can enjoy a social experience and engage in time-honored rituals such as haggling or asking for special deals. The business environment in China, and specifically an underdeveloped set of business rules [10], has encouraged distinctive forms of e-commerce with Chinese characteristics. Each of the profiled success stories used the Internet to create or extend a competitive advantage by building upon its core competencies. To be specific, Mecox Lane is leveraging the marketing expertise and order fulfillment capabilities from its successful mail order business model; Li & Fung has gone online to reinforce its knowledge of and relationships with thousands of suppliers across China; AAH has made use of its market leadership position to modernize the aluminum industry’s supply chain with its i-Metal venture. Given the enduring nature of Chinese relationships and the fragmentation in their industries, each profiled venture is expected to enjoy a significant first-mover advantage. In mainland China, e-commerce may not only enhance efficiencies at the firm or supply chain level, but also serve as a catalyst for hastening the development of the fundamental rules and infrastructure needed for market-based commerce. Although the Chinese government aims to promote IT-enabled economic development, its Internet policies have the potential to inhibit business innovation. It remains to be seen how e-commerce will develop in China and what role it will play in the economic development of the world’s most populous country.