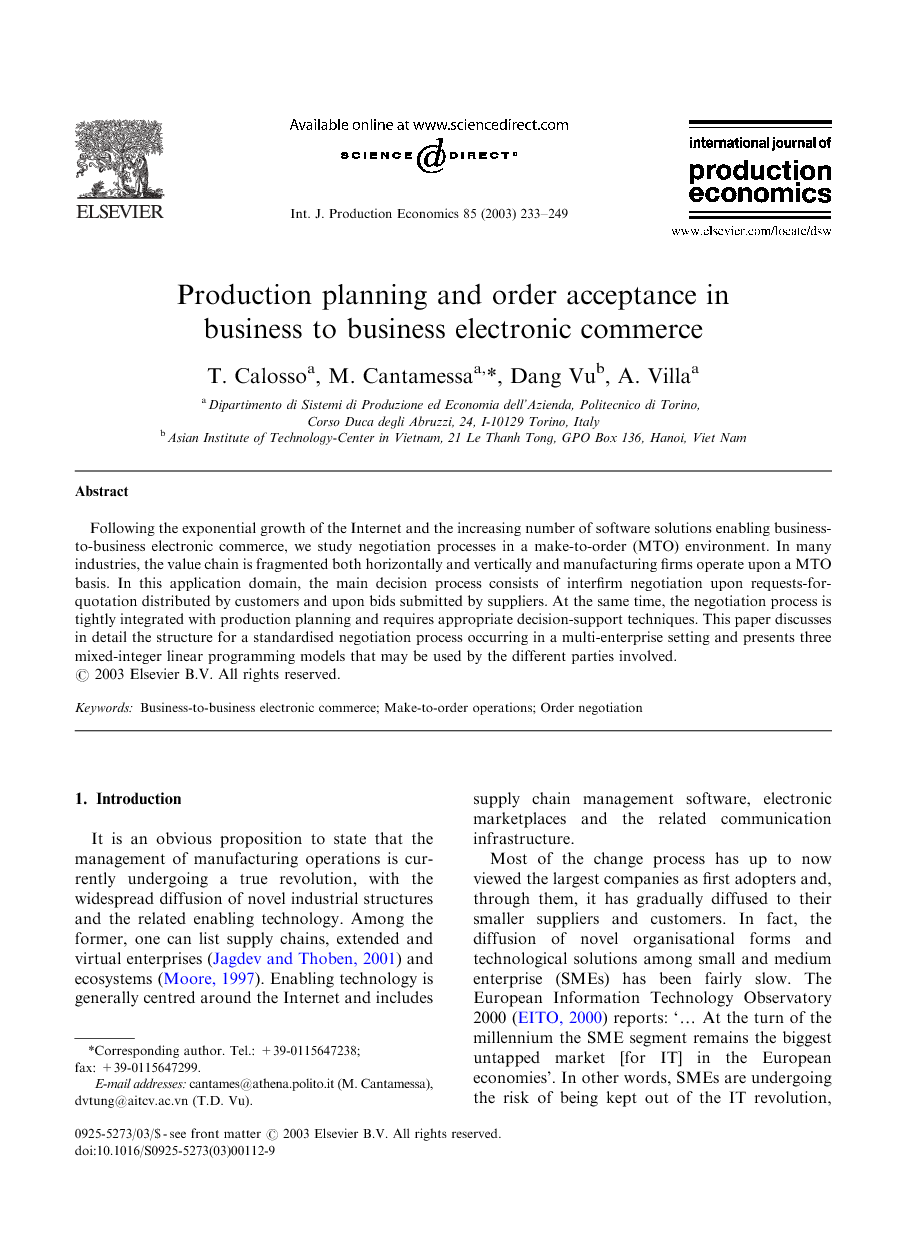 Following the exponential growth of the Internet and the increasing number of software solutions enabling business-to-business electronic commerce, we study negotiation processes in a make-to-order (MTO) environment. In many industries, the value chain is fragmented both horizontally and vertically and manufacturing firms operate upon a MTO basis. In this application domain, the main decision process consists of interfirm negotiation upon requests-for-quotation distributed by customers and upon bids submitted by suppliers. At the same time, the negotiation process is tightly integrated with production planning and requires appropriate decision-support techniques. This paper discusses in detail the structure for a standardised negotiation process occurring in a multi-enterprise setting and presents three mixed-integer linear programming models that may be used by the different parties involved.

The paper has discussed in detail a negotiation process model and three decision-making problems that are representative of the negotiation rounds that may be found within a multi-tiered value chain operating upon a MTO basis. In such application domain, the main decision process consists in interfirm negotiation upon requests-for-quotation distributed by customers and upon the related bids submitted by suppliers. The negotiation process has led to the identification of the three problems of “offer request examination” (when a supplier responds to a customer with a bid), “bid evaluation” (when a customer must select a bidder) and “offer request creation” (when a customer must create an offer request to be distributed to suppliers). By dealing with an MTO environment, this negotiation process is tightly integrated to production planning and thus requires specific decision-support techniques. The subject may be explored by further research in a variety of different directions. The most immediate ones consist in increasing the degree of automation with which decisions covered by models M1–M3 are made (see the flowcharts in Fig. 6 and Fig. 7). Moreover, to study ways with which the negotiating firms may be helped to reach Pareto optimal solutions without engaging in too many time-consuming negotiation rounds. This requires to use the models M1 and M3 in order to compute the firm- and situation-specific tradeoff curves among relevant variables, such as price and due date of jobs.