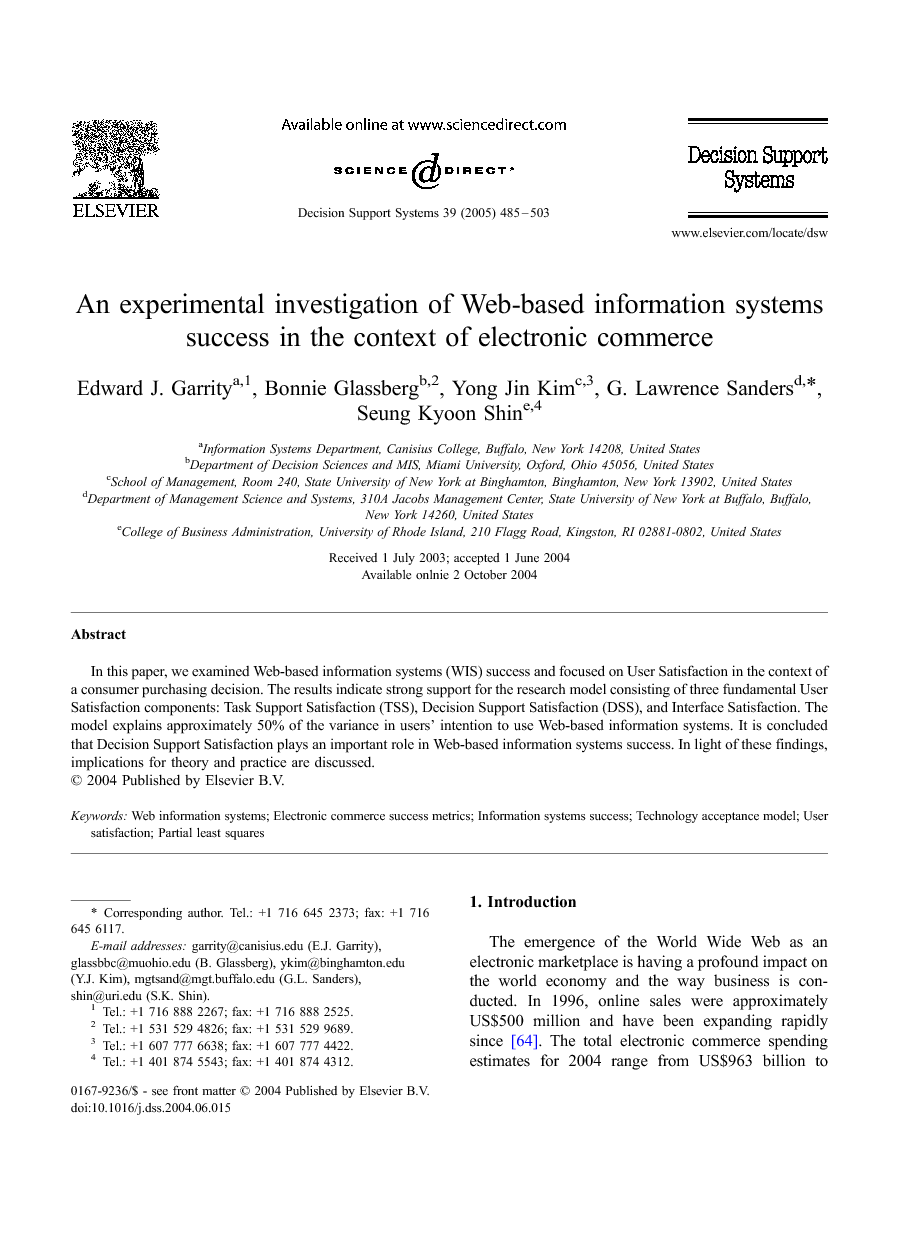 The emergence of the World Wide web as an electronic marketplace is having a profound impact on the world economy and the way business is conducted. In 1996, online sales were approximately US$500 million and have been expanding rapidly since [64]. The total electronic commerce spending estimates for 2004 range from US$963 billion to US$4 trillion [20]. Many firms positioned and deployed systems to compete in the electronic marketplace. The systems, in general, are referred to as web-based information systems (WIS) [76]. web-based information systems [76] represent a new frontier for businesses trying to establish an on-line presence where consumers are free to shop in more efficient “friction free markets.” Incorporating the radical changes in global marketplaces created by this new application of information technology, web-based systems are considerably different from the traditional systems in terms of their scope and focus [91]. WIS are usually built to facilitate consumer oriented tasks and focus on enhancing the consumer decision making process. As the web environment is characterized as non-linear in nature, presentation and delivery of information and frictionless work support are very critical for attracting consumers and enhancing the shopping experience. Lederer et al.'s [46] study found that the TAM model did not adequately explain web use, and this implies that traditional information systems have different characteristics than WIS. Given the importance of electronic commerce and WIS, in terms of the magnitude of its impact on business process and organization structure, there is little research addressing fundamental issues such as how electronic commerce systems success can be measured, whether existing measures of success can be applied, and how consumers react to the online shopping experience. Without a clear understanding of the dynamics of web-based system success to guide firms, proper strategies and system designs are mere speculation. A central activity for researchers will be to define and operationalize the constructs for understanding the success of electronic commerce systems. This paper, while drawing on the traditional information systems success literature, extends that literature to the development of a web-based model for electronic commerce success in the context of a consumer purchase decision. The contributions of the current study are threefold. First, this research addresses the issue of how to predict users' intent to use a particular web site utilizing traditional information systems success theory. The results should be of great interest to web designers, IS staff and researchers. Second, by explaining the dynamic relationship between User Satisfaction components which influence WIS success, the current research can aid researchers in further refinement of information systems success models in general. Third, the current study provides a reasonable background for applying existing measures of information systems success to the electronic commerce environment.

This study attempts to address several of the issues in electronic commerce research: How should web-based information systems success be measured in the context of User Satisfaction, whether existing measures of success can be applied, and how consumers react to commercial web sites. The results of this study, which draw on the DeLone and McLean Model [17], the Garrity and Sanders' [25] model of IS success, and TAM, support the use of WISSM for examining web-based information systems success. The results also confirm three fundamental WIS User Satisfaction components (Task Support Satisfaction, Decision Support Satisfaction, and Interface Satisfaction) that explain approximately 50% of the variance in users' Intention to Use a WIS. The amount of variance explained in Behavioral Intention to Use, however, needs to be carefully interpreted with the understanding that the experiment was done within a contrived situation. The respondents were not actually making a purchase. An important facet of conducting WIS research is the availability of a dependent variable that is able to reflect the concept of system success. A set of questions has been presented that can be used to measure WIS success. This is, of course, not the only available scale nor should it be considered the final instrument. The brevity of the scale along with its reasonably interpretable and clear dimensions designates this measure as a useful addition to the current literature. This research is not without limitations. First, this experiment utilized a web-based information system, focusing on a fundamental but core purchasing task. The subjects in this study were asked to determine a product to purchase, given a constrained budget. A complete assessment of consumer purchasing behavior in an electronic market should, however, include after sale support, order tracking, and should be extended to the areas of “need assessment,” advertising, and promotion (see Ref. [57]). While the current study examined those respondents who were considered a major user group, further experiments could utilize new referent groups and control the experimental environment more closely. That is, future study needs to include various user groups (i.e., individuals in high school, those who do not go to college, and users with disposable income) and investigate differences in their behavior. Notwithstanding these limitations, the study supports the basic research question that Decision Support Satisfaction and Task Support Satisfaction do matter in WIS success. This follows recommendations by Lederer et al. [46] to develop more robust constructs to explain web-based information systems success. In the future, research on web-based information systems assessment could be extended to consider variations in web support required for different types of products. For example, the experimental design could manipulate differences in product information intensity and determine the effect on purchase behavior. Palmer and Griffith [59] call for research into web-based product purchase decisions that manipulate the product type to account for differences in consumer “involvement” in the purchase. web site design for high involvement products may require different types of decision and task support. In addition, most research in the web success area has found a strong link between Trust and purchase behavior (e.g., Ref. [82]). For future work, it would be worthwhile to consider the effect of Trust on Behavioral Intention and different User Satisfaction dimensions. Future research might also examine the potential of the web-based Information Systems Success Model for different web-based applications. Models of success may need to be modified as technology changes and new models of business and computing evolve.