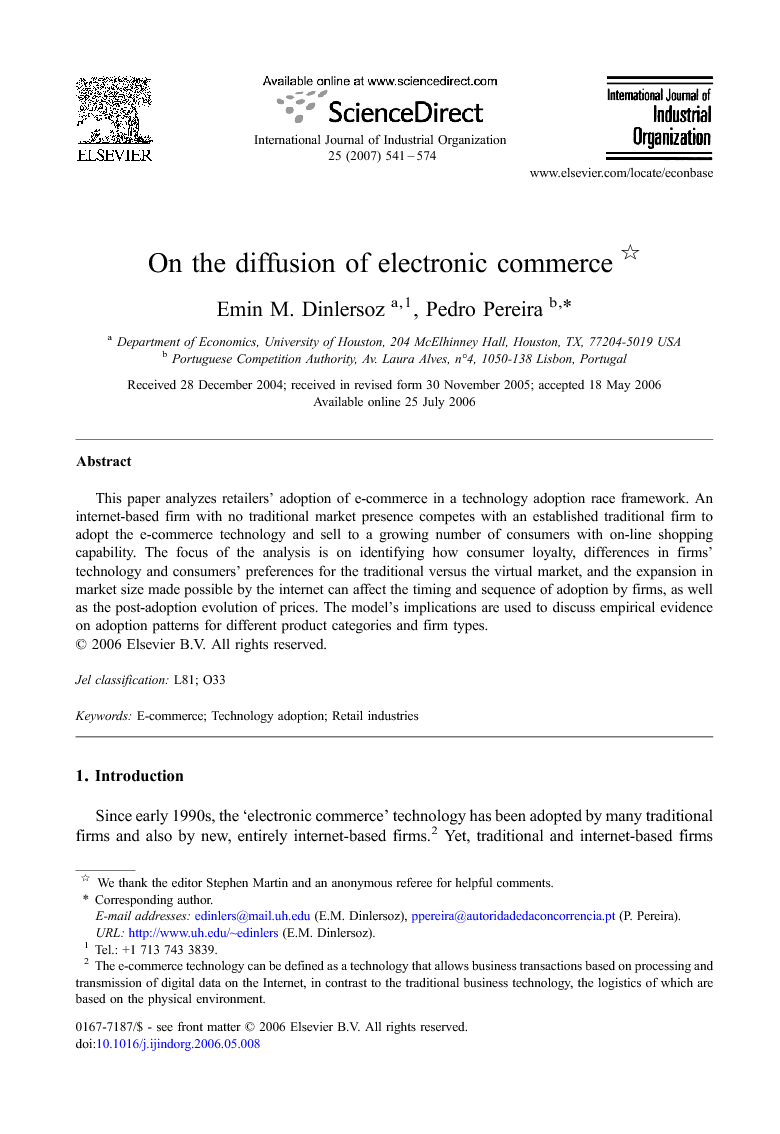 This paper analyzes retailers' adoption of e-commerce in a technology adoption race framework. An internet-based firm with no traditional market presence competes with an established traditional firm to adopt the e-commerce technology and sell to a growing number of consumers with on-line shopping capability. The focus of the analysis is on identifying how consumer loyalty, differences in firms' technology and consumers' preferences for the traditional versus the virtual market, and the expansion in market size made possible by the internet can affect the timing and sequence of adoption by firms, as well as the post-adoption evolution of prices. The model's implications are used to discuss empirical evidence on adoption patterns for different product categories and firm types.

We analyzed retailers' incentives to adopt electronic commerce, emphasizing the effect of technology, preferences, consumer inertia, and market expansion on entry decisions and post-entry dynamics of prices. While other explanations, such as favorable financial markets, ample venture capital, and irrational behavior by entrepreneurs, can account for early adoption by new firms, the model here has focused on important differences between the traditional and virtual markets, and between established and new firms. The results provide a simple characterization of market environments conducive for adoption of e-commerce by new versus established firms and the observed adoption patterns can be explained by equilibria resulting from the model under different parameter configurations. The model provides guidance for assessing what might happen in other sectors that have not yet embraced e-commerce. Furthermore, the post-adoption price dynamics is broadly consistent with available empirical evidence. The analysis also demonstrates that the simple technology adoption framework can be extended to analyze entry decisions in more complicated market environments. Similar applications can be made in other settings where it is important to recognize the features of the market environment in the stage game. As an extension, it would be interesting to endogenize the diffusion of internet access among consumers by making the diffusion of the internet among consumers a function of firms' adoption and pricing decisions. This extension would allow firms to influence consumers' adoption decisions using their adoption and pricing strategies. Another promising avenue of research is to introduce a process by which loyalty develops over time endogenously as a result of competition, in contrast to exogenous loyalty used here.