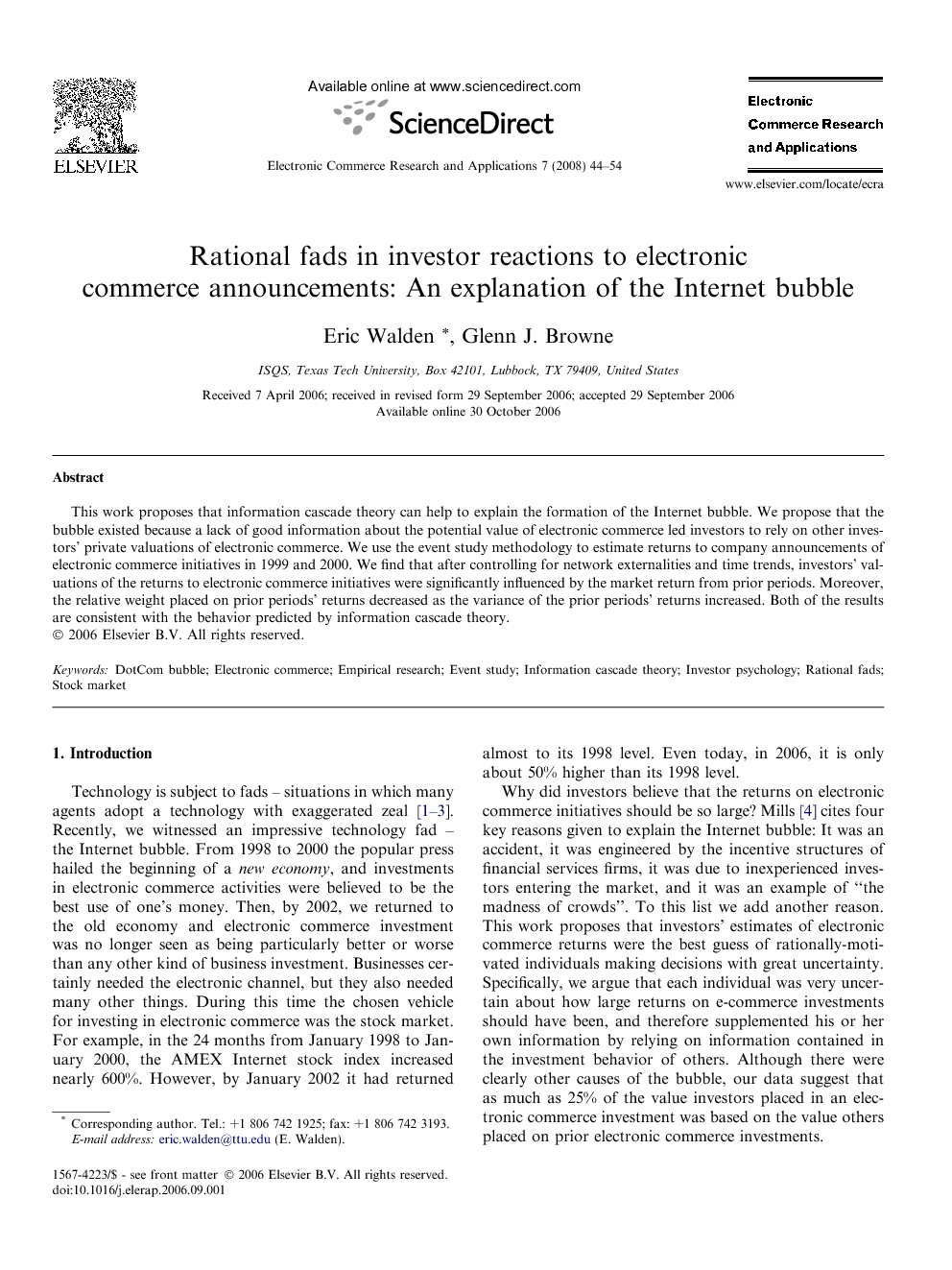 Technology is subject to fads – situations in which many agents adopt a technology with exaggerated zeal [1], [2] and [3]. Recently, we witnessed an impressive technology fad – the Internet bubble. From 1998 to 2000 the popular press hailed the beginning of a new economy, and investments in electronic commerce activities were believed to be the best use of one’s money. Then, by 2002, we returned to the old economy and electronic commerce investment was no longer seen as being particularly better or worse than any other kind of business investment. Businesses certainly needed the electronic channel, but they also needed many other things. During this time the chosen vehicle for investing in electronic commerce was the stock market. For example, in the 24 months from January 1998 to January 2000, the AMEX Internet stock index increased nearly 600%. However, by January 2002 it had returned almost to its 1998 level. Even today, in 2006, it is only about 50% higher than its 1998 level. Why did investors believe that the returns on electronic commerce initiatives should be so large? Mills [4] cites four key reasons given to explain the Internet bubble: It was an accident, it was engineered by the incentive structures of financial services firms, it was due to inexperienced investors entering the market, and it was an example of “the madness of crowds”. To this list we add another reason. This work proposes that investors’ estimates of electronic commerce returns were the best guess of rationally-motivated individuals making decisions with great uncertainty. Specifically, we argue that each individual was very uncertain about how large returns on e-commerce investments should have been, and therefore supplemented his or her own information by relying on information contained in the investment behavior of others. Although there were clearly other causes of the bubble, our data suggest that as much as 25% of the value investors placed in an electronic commerce investment was based on the value others placed on prior electronic commerce investments. In this paper, we investigate empirically the idea that technology fads are a consequence of agents inferring information about the benefits of a technology from the observable actions of other agents. We use stock return data from the “DotCom” era to investigate this question. In particular, we investigate agents’ willingness to pay for technology based on other agents’ willingness to pay for similar technologies. The paper proceeds as follows. In the next section we review literature explaining technology fads. We then develop a theoretical explanation of fads as information processes. We then describe the data and conduct our analyses. We conclude with implications of our findings for research and practice.