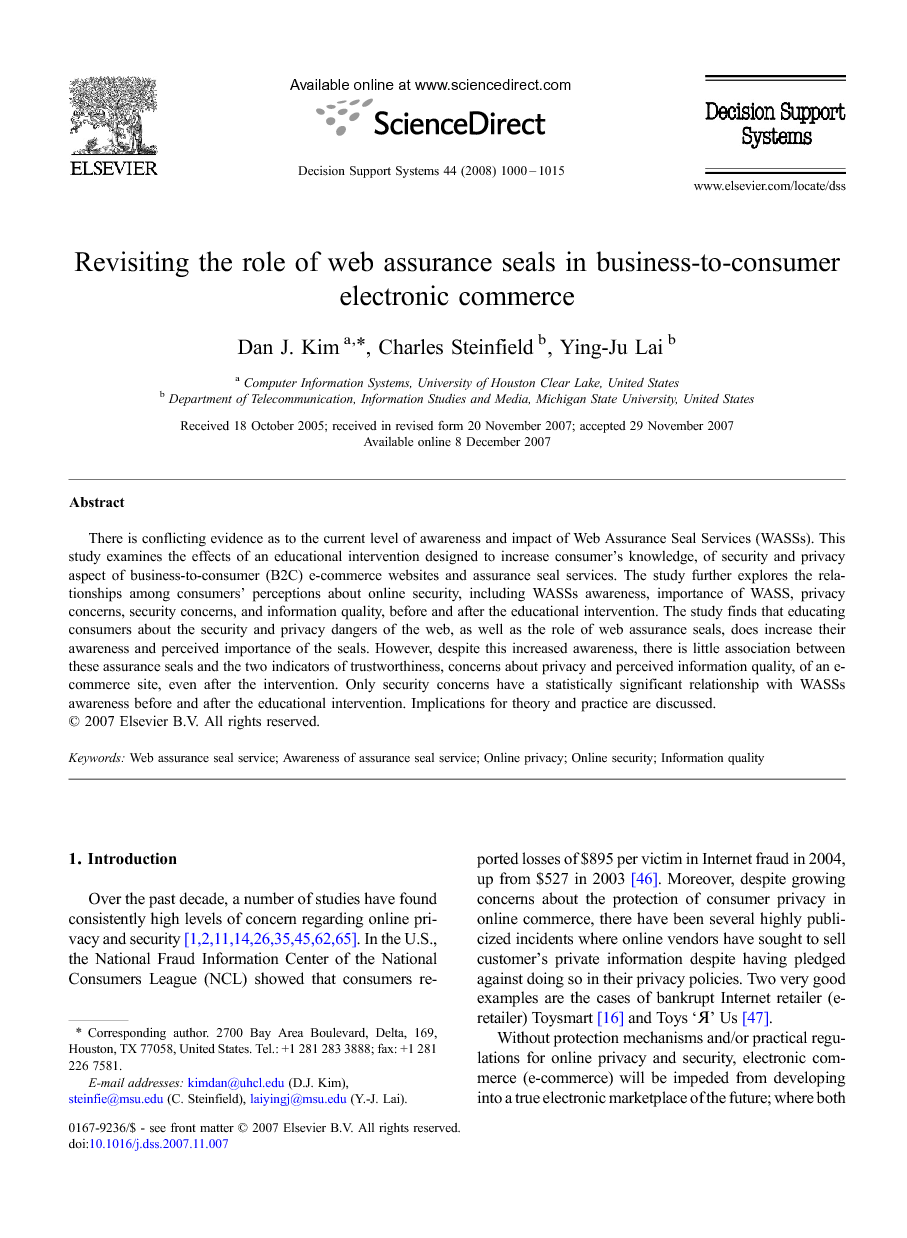 There is conflicting evidence as to the current level of awareness and impact of Web Assurance Seal Services (WASSs). This study examines the effects of an educational intervention designed to increase consumer's knowledge, of security and privacy aspect of business-to-consumer (B2C) e-commerce websites and assurance seal services. The study further explores the relationships among consumers' perceptions about online security, including WASSs awareness, importance of WASS, privacy concerns, security concerns, and information quality, before and after the educational intervention. The study finds that educating consumers about the security and privacy dangers of the web, as well as the role of web assurance seals, does increase their awareness and perceived importance of the seals. However, despite this increased awareness, there is little association between these assurance seals and the two indicators of trustworthiness, concerns about privacy and perceived information quality, of an e-commerce site, even after the intervention. Only security concerns have a statistically significant relationship with WASSs awareness before and after the educational intervention. Implications for theory and practice are discussed.

Over the past decade, a number of studies have found consistently high levels of concern regarding online privacy and security [1], [2], [11], [14], [26], [35], [45], [62] and [65]. In the U.S., the National Fraud Information Center of the National Consumers League (NCL) showed that consumers reported losses of $895 per victim in Internet fraud in 2004, up from $527 in 2003 [46]. Moreover, despite growing concerns about the protection of consumer privacy in online commerce, there have been several highly publicized incidents where online vendors have sought to sell customer's private information despite having pledged against doing so in their privacy policies. Two very good examples are the cases of bankrupt Internet retailer (e-retailer) Toysmart [16] and Toys ‘Я’ Us [47]. Without protection mechanisms and/or practical regulations for online privacy and security, electronic commerce (e-commerce) will be impeded from developing into a true electronic marketplace of the future; where both consumers and businesses participate in exchanges and transactions as spontaneously as in the traditional marketplace. Thus, as one of the efforts to alleviate consumer concerns, a variety of assurance seal services on websites (e.g., WebTrust, Verisign, TRUSTe, BBBOnLine) have entered the online commerce arena to help consumers judge the trustworthiness of an online vendor. These firms offer a form of institution-based trust which is formed through societal institutions such as certification by account or governmental regulations [41], [54] and [70]. There is conflicting evidence as to the current level of awareness and impact of assurance seal services. Some studies [21], [32] and [69] find that the presence of an assurance seal results in an increased willingness to purchase by consumers, while others [11], [27] and [29] show that the effect is limited due to the consumer's lack of awareness and understanding of assurance services. The lack of understanding and awareness of assurance services suggest that there may be a need for greater effort to educate consumers about the role of assurance seals on the web. Thus, the purpose of this study is to examine consumer's awareness of assurance services and the extent to which they perceive assurance seals to be important in business-to-consumer (B2C) e-commerce. We explore whether an intervention to educate consumers about the security and privacy dangers of the web, as well as the role of assurance services, influences their perceptions about the relative security and privacy of e-commerce sites they visit. Research question: Does an intervention to educate consumers about website security features including privacy, security practices, information quality, and Web Assurance Seal Services affect consumer's perception of the website security features? The remainder of the paper is organized as follows. In Section 2, we present some background literature regarding assurance services in e-commerce and the effect of educational interventions. Section 3 proposes a research model with a discussion of the research constructs in the model with hypotheses. Section 4 discusses research methodology and data collection. The results of the data analysis of study follow in the Section 5. Section 6 concludes the paper with a discussion of the findings, as well as the limitations and implications of this study.