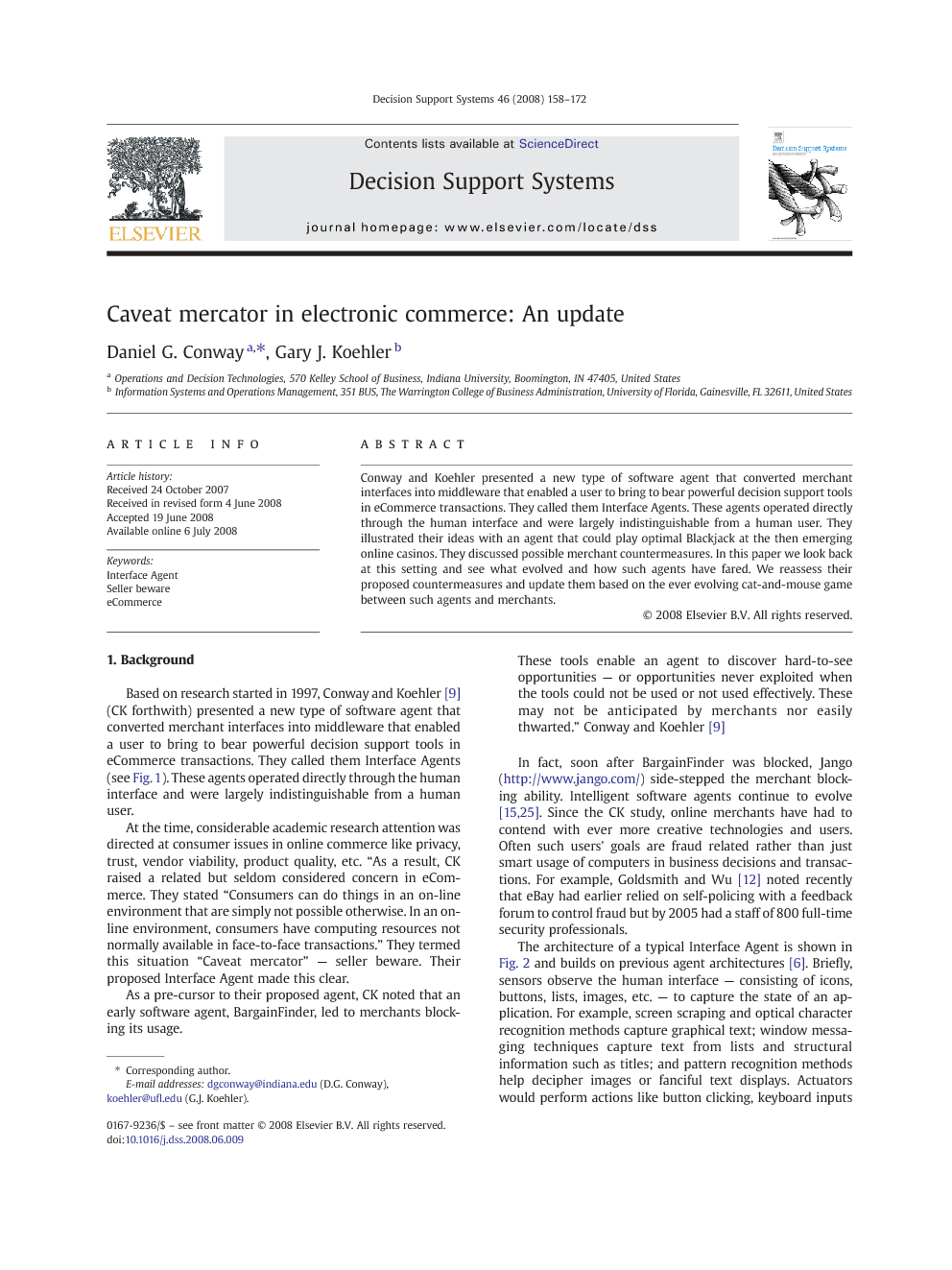 Conway and Koehler presented a new type of software agent that converted merchant interfaces into middleware that enabled a user to bring to bear powerful decision support tools in eCommerce transactions. They called them Interface Agents. These agents operated directly through the human interface and were largely indistinguishable from a human user. They illustrated their ideas with an agent that could play optimal Blackjack at the then emerging online casinos. They discussed possible merchant countermeasures. In this paper we look back at this setting and see what evolved and how such agents have fared. We reassess their proposed countermeasures and update them based on the ever evolving cat-and-mouse game between such agents and merchants.

Interface Agents are software agents that assist in making eCommerce decisions based on information intended solely for human consumption, and attempt to participate with behavior indistinguishable from human users. This paper presents an update to the state of Interface Agents first presented ten years ago by the same authors, and provides a history of internet merchant attempts to prevent and detect such agents. Many of the issues identified in the earlier research were indeed addressed during the ten year period, and several other merchant responses are discussed here. We provide further suggestions for merchants who are involved in transactional business where decision support systems can lead to negative merchant outcomes. As any eCommerce site must use an interface for its intended audience, we provide tactical suggestions for merchants to discourage Interface Agents, including suggestions on dynamically altering the display in an attempt to confuse an agent, creating navigational obstacles, understanding the agent architecture, exploiting rare event where agents are likely not as well trained, and finally monitoring agent behavior. More important though are the business model implications. Certain business models which prevent decision support systems made available by informative contacts (collaboration, collusion) or the advantage of advanced mathematics or computational assistance may simply not be profitable in an internet setting, where such support is impossible to prevent. We end with a final observation. An assumption made by CK was that Interface Agents can be detrimental for eCommerce. This need not always be true. In many settings that the PRO and WinHoldEm agents played, the sites took a percentage of each fee or wager (a rake). Since they get the same fee from a software agent as a real human, they may not have an incentive to restrict software agents except to the extent that human players may eventually avoid their site to avoid playing against the superior software agents or, in a more general view, provide the additional revenue to merchants to make up for the higher opportunities enjoyed by Interface Agents. This moral hazard should be explored further. Much effort in the past several years has gone into the integration of people, processes, and technology. The application-to-application integration is known as enterprise application integration (EAI) [20]. It was made possible by the standardization of web service protocols. People-to-people integration is known as workflow, and workflow has also received significant attention [32]. Finally, business process management systems are emerging which enable communication between people and applications in any combination [20]. In all cases, the communication is designed to enable easy communication between pairings. We consider the problem of designing application-to-people applications that are explicitly not application-to-application.In most cases, the design goal is not perfect prevention, but rather system design to be more difficult for an agent to exploit than a competing site with otherwise similar business rules over a typical transaction's time period of interest. Our experience and contribution applies to agents who interact with either text or graphically displayed information. While the agents we describe have been successful in defeating the merchant designs, we anticipate continuing cat-and-mouse tactics will continue to evolve with each side having some degree of success. Design issues with communication in the format of streaming media are not addressed in this research.