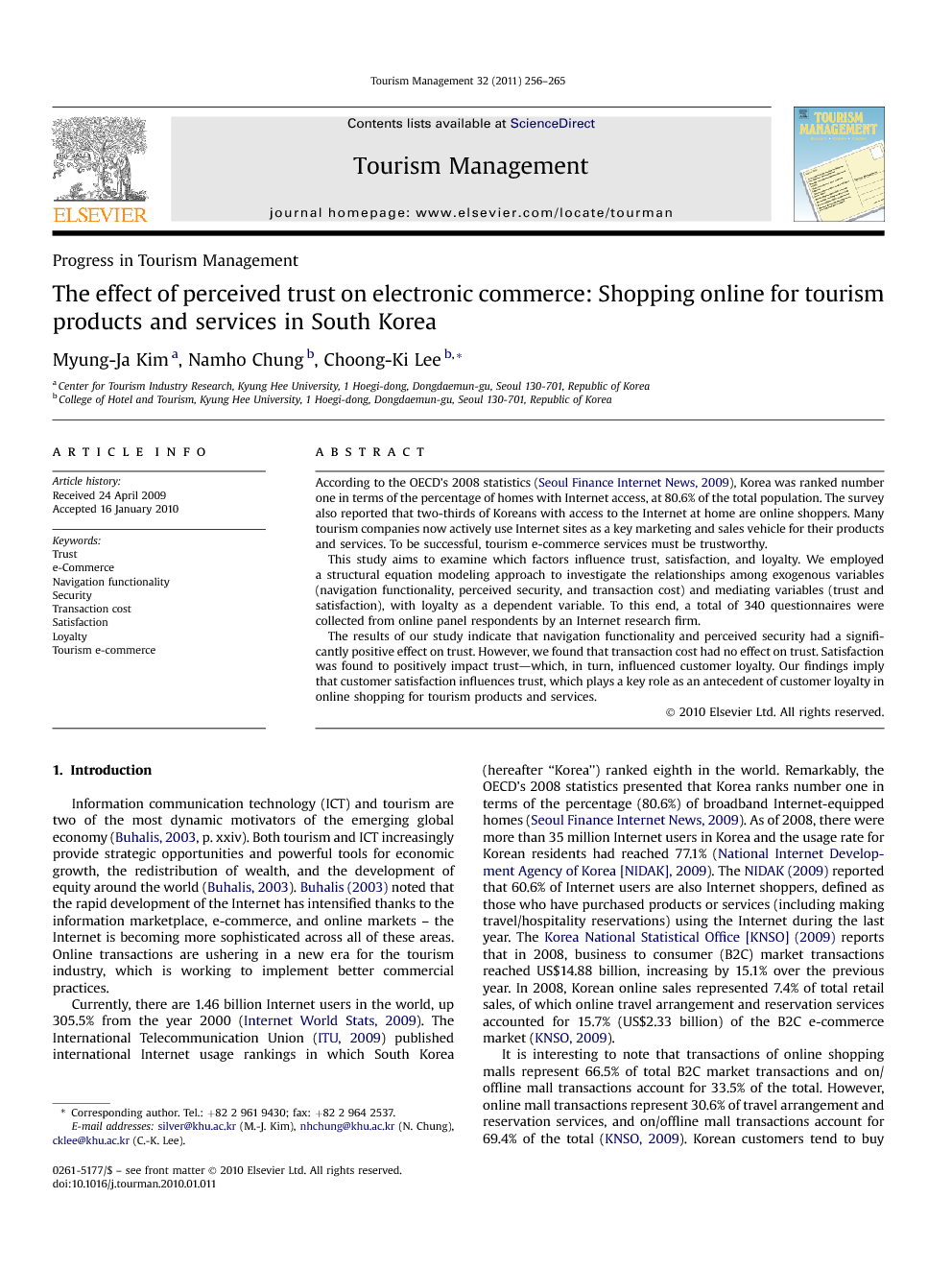 According to the OECD's 2008 statistics (Seoul Finance Internet News, 2009), Korea was ranked number one in terms of the percentage of homes with Internet access, at 80.6% of the total population. The survey also reported that two-thirds of Koreans with access to the Internet at home are online shoppers. Many tourism companies now actively use Internet sites as a key marketing and sales vehicle for their products and services. To be successful, tourism e-commerce services must be trustworthy. This study aims to examine which factors influence trust, satisfaction, and loyalty. We employed a structural equation modeling approach to investigate the relationships among exogenous variables (navigation functionality, perceived security, and transaction cost) and mediating variables (trust and satisfaction), with loyalty as a dependent variable. To this end, a total of 340 questionnaires were collected from online panel respondents by an Internet research firm. The results of our study indicate that navigation functionality and perceived security had a significantly positive effect on trust. However, we found that transaction cost had no effect on trust. Satisfaction was found to positively impact trust—which, in turn, influenced customer loyalty. Our findings imply that customer satisfaction influences trust, which plays a key role as an antecedent of customer loyalty in online shopping for tourism products and services.

Information communication technology (ICT) and tourism are two of the most dynamic motivators of the emerging global economy (Buhalis, 2003, p. xxiv). Both tourism and ICT increasingly provide strategic opportunities and powerful tools for economic growth, the redistribution of wealth, and the development of equity around the world (Buhalis, 2003). Buhalis (2003) noted that the rapid development of the Internet has intensified thanks to the information marketplace, e-commerce, and online markets – the Internet is becoming more sophisticated across all of these areas. Online transactions are ushering in a new era for the tourism industry, which is working to implement better commercial practices. Currently, there are 1.46 billion Internet users in the world, up 305.5% from the year 2000 (Internet World Stats, 2009). The International Telecommunication Union (ITU, 2009) published international Internet usage rankings in which South Korea (hereafter “Korea”) ranked eighth in the world. Remarkably, the OECD's 2008 statistics presented that Korea ranks number one in terms of the percentage (80.6%) of broadband Internet-equipped homes (Seoul Finance Internet News, 2009). As of 2008, there were more than 35 million Internet users in Korea and the usage rate for Korean residents had reached 77.1% (National Internet Development Agency of Korea [NIDAK], 2009). The NIDAK (2009) reported that 60.6% of Internet users are also Internet shoppers, defined as those who have purchased products or services (including making travel/hospitality reservations) using the Internet during the last year. The Korea National Statistical Office [KNSO] (2009) reports that in 2008, business to consumer (B2C) market transactions reached US$14.88 billion, increasing by 15.1% over the previous year. In 2008, Korean online sales represented 7.4% of total retail sales, of which online travel arrangement and reservation services accounted for 15.7% (US$2.33 billion) of the B2C e-commerce market (KNSO, 2009). It is interesting to note that transactions of online shopping malls represent 66.5% of total B2C market transactions and on/offline mall transactions account for 33.5% of the total. However, online mall transactions represent 30.6% of travel arrangement and reservation services, and on/offline mall transactions account for 69.4% of the total (KNSO, 2009). Korean customers tend to buy relatively low- and medium-priced tourism products and services online, but they are likely to purchase high-priced tourism products and services such as luxury cruise packages offline. The energetic growth and development of the tourism industry can in part be attributed to the Internet and ICT (Buhalis & Law, 2008). Buhalis and Law (2008) suggested that reaching a new information threshold of universal, ubiquitous communication has brought the entire tourism industry into a new stage of interactivity, accelerating both wired and wireless management and marketing. The online method is ideal for the tourism industry in terms of enabling information retrieval and electronic transactions. Chen (2006) pointed to the success of certain online-tourism businesses, such as Expedia, Travelocity, and Orbitz, along with an increasing prevalence of online shopping for tourism products and services. In recent years, an increasing number of consumers have taken advantage of the many benefits offered by electronic commerce (Yoon, 2002, p. 48). Yoon (2002) presented convenience, economic cost, and product diversity as only some of the attributes associated with the e-commerce revolution that has brought about a fundamental change in the conceptualization of commercial transactions. The number of Internet users has increased dramatically, but many users are reluctant to provide sensitive personal information online because they do not trust e-commerce security (Suh and Han, 2003 and Yoon, 2002). Suh and Han (2003) contend that online users are able to access critical files on computers all over the world because the Internet was originally designed for research, not for commerce. Adding to the uncertainty of e-commerce is the fact that the parties to a transaction are not co-located and thus cannot rely on elements such as physical proximity, hand-shakes, and body language (Suh & Han, 2003, p. 138). The Internet has changed how the tourism business operates around the globe. For example, Maswera, Edwards, and Dawson (2009) explained how the tourism industry in sub-Saharan Africa may overcome various obstacles to e-commerce adoption and practice. In recent years, online relationships in the tourism industry have become very important throughout the world, with trust becoming one of the most important factors that makes e-business successful for hotels and resorts (Fam, Foscht, & Collins, 2004). The nature of the tourism industry seems ideally suited to the Internet: (1) the product offered by the tourism industry is intangible; (2) production and consumption are inseparable; and (3) demand is perishable and fluctuates significantly (McCole, 2002). McCole (2002) suggested that trust is essential to all commercial transactions and that the role of trust in economic exchanges online may be a key marketing tool. However, there is a dearth of research regarding perceived trust in online shopping for tourism products and services. Trust plays a central role in transactions, and a lack of trust in online businesses is a primary reason why many consumers choose not to shop online (Wu & Chang, 2006, p. 1254). Certain previous studies (Cyr, 2008, Cyr et al., 2008, Harris and Goode, 2004, Jin et al., 2007 and McKnight and Chervany, 2001) have tried to examine trust in electronic commerce contexts together with other factors. For example, McKnight and Chervany (2001) designed a typology of trust concepts by using an e-commerce customer relationships model. Kim, Kim, and Shin (2009) tried to model trust roles using subjective norms, offering practical suggestions for airline marketing managers regarding strategic plans and applications that are effective in enhancing productivity or performance. Furthermore, certain studies have explored consumer satisfaction and loyalty in terms of purchase intentions (Kim and Lim, 2005 and Lim and Kim, 2006). A few studies have been conducted on trust in the tourism e-commerce context with regard to other concepts that are important to consumer satisfaction (Chen, 2006, Kim et al., 2009, McCole, 2002 and Wu and Chang, 2006). Furthermore, research has been very limited regarding the perceived trust encountered by experienced online shoppers for tourism products and services. In this respect, this study aims to examine which factors influence trust and whether trust and satisfaction have an effect on loyalty. A structural equation modeling approach was employed to investigate the relationships among exogenous variables (navigation functionality, perceived security, and transaction costs), and trust, satisfaction, and loyalty.