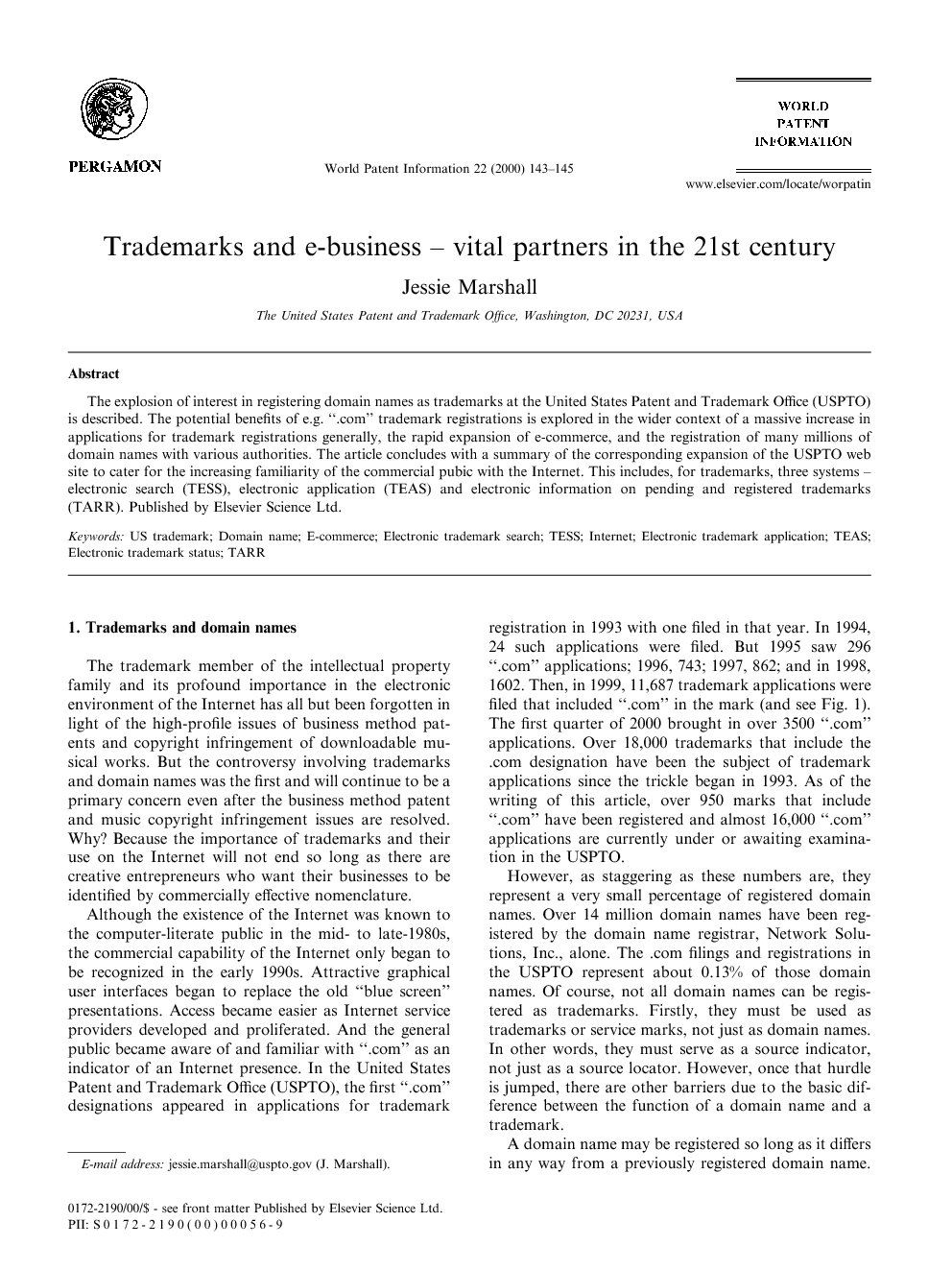 The explosion of interest in registering domain names as trademarks at the United States Patent and Trademark Office (USPTO) is described. The potential benefits of e.g. “.com” trademark registrations is explored in the wider context of a massive increase in applications for trademark registrations generally, the rapid expansion of e-commerce, and the registration of many millions of domain names with various authorities. The article concludes with a summary of the corresponding expansion of the USPTO web site to cater for the increasing familiarity of the commercial pubic with the Internet. This includes, for trademarks, three systems – electronic search (TESS), electronic application (TEAS) and electronic information on pending and registered trademarks (TARR).

The trademark member of the intellectual property family and its profound importance in the electronic environment of the Internet has all but been forgotten in light of the high-profile issues of business method patents and copyright infringement of downloadable musical works. But the controversy involving trademarks and domain names was the first and will continue to be a primary concern even after the business method patent and music copyright infringement issues are resolved. Why? Because the importance of trademarks and their use on the Internet will not end so long as there are creative entrepreneurs who want their businesses to be identified by commercially effective nomenclature. Although the existence of the Internet was known to the computer-literate public in the mid- to late-1980s, the commercial capability of the Internet only began to be recognized in the early 1990s. Attractive graphical user interfaces began to replace the old “blue screen” presentations. Access became easier as Internet service providers developed and proliferated. And the general public became aware of and familiar with “.com” as an indicator of an Internet presence. In the United States Patent and Trademark Office (USPTO), the first “.com” designations appeared in applications for trademark registration in 1993 with one filed in that year. In 1994, 24 such applications were filed. But 1995 saw 296 “.com” applications; 1996, 743; 1997, 862; and in 1998, 1602. Then, in 1999, 11,687 trademark applications were filed that included “.com” in the mark (and see Fig. 1). The first quarter of 2000 brought in over 3500 “.com” applications. Over 18,000 trademarks that include the .com designation have been the subject of trademark applications since the trickle began in 1993. As of the writing of this article, over 950 marks that include “.com” have been registered and almost 16,000 “.com” applications are currently under or awaiting examination in the USPTO.However, as staggering as these numbers are, they represent a very small percentage of registered domain names. Over 14 million domain names have been registered by the domain name registrar, Network Solutions, Inc., alone. The .com filings and registrations in the USPTO represent about 0.13% of those domain names. Of course, not all domain names can be registered as trademarks. Firstly, they must be used as trademarks or service marks, not just as domain names. In other words, they must serve as a source indicator, not just as a source locator. However, once that hurdle is jumped, there are other barriers due to the basic difference between the function of a domain name and a trademark. A domain name may be registered so long as it differs in any way from a previously registered domain name. But a determination of likelihood of confusion in trademarks is based on whether the marks are similar, not identical. Further, trademark registration takes into account the goods and services with which the mark is associated. Dissimilarity of the goods or services may allow similar marks to register. However, domain name registration does not probe into the subject matter of the web site associated with the domain name. If a proposed domain name is the same as one already registered, it is refused by the domain name registrar. Even though they represent a small percentage of the domain names registered, why have over 18,000 domain name holders decided it is important to register their domain names as trademarks, if possible? The answer lies in the commercial insight of businesses that have applied for trademark registration of their domain names. These businesses have realized that protection of their vital e-business key is of utmost importance. The latest Uniform Domain Name Dispute Resolution Policy (UDRP) developed by the Internet Corporation for Assigned Names and Numbers (ICANN) does not require that a trademark or service mark be registered in order for a complainant to invoke its provisions. It merely requires that the domain name be “identical or confusingly similar to a trademark or service mark in which the complainant has rights.” However, a negative decision by the mandatory administrative proceeding required by the UDRP can be submitted to a court for independent resolution. Once in the US court system, the benefits of having a federal trademark registration come into play with all of its accompanying power and presumptions. Of course, the ownership of a federal trademark registration is a valuable and powerful tool in any other more traditional trademark infringement situation.

The USPTO has recognized the growing familiarity of the commercial public with using the Internet for everything from finding old high school friends to purchasing cars, books, art, food and any other commercial product that has been available through other traditional retail means. The agency has devoted time, energy, funds and expertise to making its own web site (www.uspto.gov) helpful, informative and user-friendly. In the area of trademarks, and flowing from the long-term progress in the automation of trademark activities within the office [1], [2] and [3], three vital systems have been made available to the public through the trademark electronic business center that may be accessed through the USPTO web site. The first of these systems is trademark electronic search system (TESS). TESS provides users with the same information that is used by the examining attorneys in the USPTO. It is updated daily and the basic search feature is quite easy to use. The second is trademark electronic application system (TEAS) that allows a user to fill out a form and check it for completeness over the Internet. Using eTEAS the user can then submit the form directly to the USPTO over the Internet, making an official filing on-line. Or using PrinTEAS the user can print out the completed form for mailing to the USPTO. The USPTO encourages on-line filing since the data in the application can be entered directly into the USPTO database thus eliminating data entry errors. TEAS gives step-by-step instructions for completing a form properly. And, finally, using the trademark application and registration retrieval (TARR) system, users may retrieve information about pending and registered trademarks obtained from the USPTOs internal database by simply entering a valid trademark serial number or registration number. (Future articles are being prepared to provide greater background and details about the development and use of these three systems.) An enormous amount of background, research capability and information are provided at the USPTO web site concerning both trademarks and patents. More is constantly being added. We suggest that the site should be bookmarked and referred to often by intellectual property professionals. And, while patents are vital to the commercial success of an enterprise, their effectiveness is finite. The value of a registered trademark continues so long as the mark is in use and proper maintenance documents are filed. Its value can be infinite – temporally, legally and commercially.