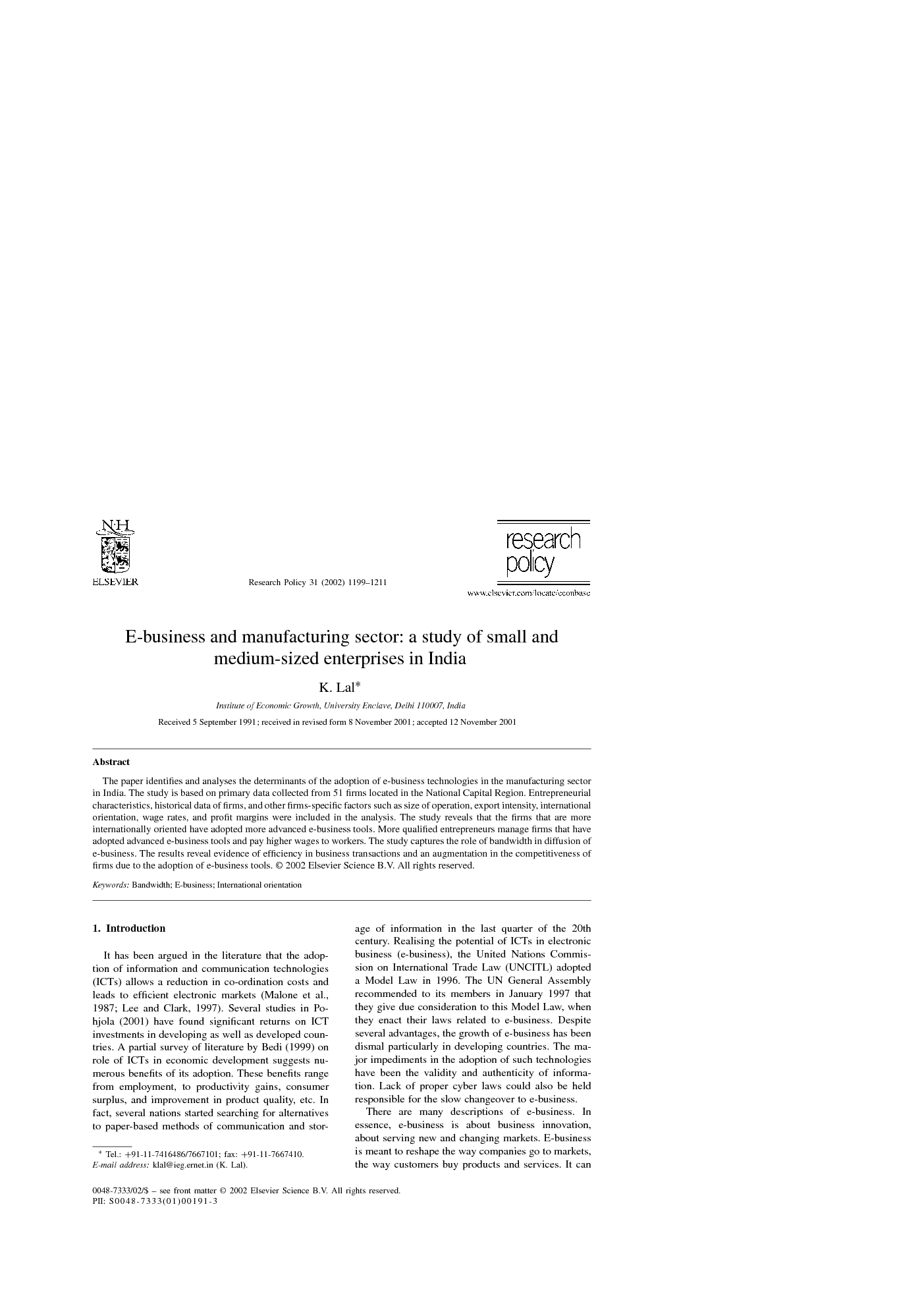 The paper identifies and analyses the determinants of the adoption of e-business technologies in the manufacturing sector in India. The study is based on primary data collected from 51 firms located in the National Capital Region. Entrepreneurial characteristics, historical data of firms, and other firms-specific factors such as size of operation, export intensity, international orientation, wage rates, and profit margins were included in the analysis. The study reveals that the firms that are more internationally oriented have adopted more advanced e-business tools. More qualified entrepreneurs manage firms that have adopted advanced e-business tools and pay higher wages to workers. The study captures the role of bandwidth in diffusion of e-business. The results reveal evidence of efficiency in business transactions and an augmentation in the competitiveness of firms due to the adoption of e-business tools.

It has been argued in the literature that the adoption of information and communication technologies (ICTs) allows a reduction in co-ordination costs and leads to efficient electronic markets (Malone et al., 1987 and Lee and Clark, 1997). Several studies in Pohjola (2001) have found significant returns on ICT investments in developing as well as developed countries. A partial survey of literature by Bedi (1999) on role of ICTs in economic development suggests numerous benefits of its adoption. These benefits range from employment, to productivity gains, consumer surplus, and improvement in product quality, etc. In fact, several nations started searching for alternatives to paper-based methods of communication and storage of information in the last quarter of the 20th century. Realising the potential of ICTs in electronic business (e-business), the United Nations Commission on International Trade Law (UNCITL) adopted a Model Law in 1996. The UN General Assembly recommended to its members in January 1997 that they give due consideration to this Model Law, when they enact their laws related to e-business. Despite several advantages, the growth of e-business has been dismal particularly in developing countries. The major impediments in the adoption of such technologies have been the validity and authenticity of information. Lack of proper cyber laws could also be held responsible for the slow changeover to e-business. There are many descriptions of e-business. In essence, e-business is about business innovation, about serving new and changing markets. E-business is meant to reshape the way companies go to markets, the way customers buy products and services. It can also be defined as a tool that forward-looking enterprises are racing to adopt. E-business technologies are meant to help adopters to reach new customers more efficiently and effectively. E-business transforms the exchange of goods, services, information, and knowledge through the use of ICTs. There are several models of e-business, namely, (i) business to business (B2B), (ii) business to consumer (B2C), (iii) consumer to consumer (C2C), (iv) business to government (B2G), and government to business (G2B). Broadly defined, there are three modes of e-business transactions. These are offline, online, and e-business using shared or individual portals. First and comparatively less effective than other forms of e-business tools, that is, offline e-business is enabled by electronic messaging systems. Offline e-business is normally done through e-mail systems while online e-business transactions take place with Uniform Resource Locators (URLs) of companies. Having a URL does not necessarily mean that an enterprise is able to process online e-business transactions. URL must be dynamic and should have online transaction facilities such as Active Server Pages (ASPs) that allow online transactions. The third and most effective way of doing e-business is through portals. Portals are the essential additions in network technologies. They fulfil an important role of aggregating contents, services, and information on the net. Broadly speaking, their position on the net is between users (buyers) and web contents. This unique position enables portals to leverage marketing and referrals as they are intermediaries between web users and companies. According to International Data Corporation (IDC) data sources, the CAGR of e-business in the global market has been 105% since 1995. E-business has emerged as the fastest growing technology in recent times. Although there are several models of e-business, only two models, namely, B2B and B2C have experienced the highest growth. Within these two, B2B has grown from 3.5 billion US$ in 1995 to 34.0 billion US$ in 1998 while the growth of B2C has been 1.0 billion US$ in 1995 to 4.0 billion US$ in 1998. The share of B2B has increased from 77.78% in 1995 to 89.47% in 1998. These data suggest that B2B has grown faster than B2C worldwide. In Indian context, the government had taken initiative since late-1980s in the adoption of e-business by allowing companies to file their annual returns through floppies. However, the diffusion of e-business could not gain momentum due to the reasons mentioned earlier. Having taken cognisance of the UN General Assembly resolution and the recommendations of Indian industry associations, the Government of India drafted an IT bill to boost e-business in the country in 1999. Passed by the Parliament on 16 May 2000, the IT Bill 99 deals with the matters such as digital signature, electronic governance, electronic acknowledgement, acquisition and despatch of electronic records, regulation of certifying authorities, penalties and adjudication, the cyber regulations appellate tribunal, offences, and laws related to network service providers. With the passage of the IT Bill 99 by the Parliament, e-business and e-governance are likely to grow as fast, if not faster, than the ICT sector itself. However, there are reasons to be skeptical about the diffusion of e-business. The current e-commerce scenario in India is presented in Fig. 1.The e-commerce scenario in India is more or less similar to the global picture. As far as the share of B2B to the total e-business is concerned, it is static having maintained a constant share (90%) since 1998. According to an estimate by NASSCOM (2000), the growth of e-business is expected to be the same, if not more, than in the global market. Several aspects are associated with the adoption of e-business. First, the identification of potential areas in which e-business technologies can be adopted. Second, the availability of telecommunication networks. Third, the potential gains expected from e-business. And fourth, the impediments associated with e-business in a developing context. It may not be possible to cover all these aspects in one study. The main objectives of this study, however, are as follows. • The identification and analysis of factors that have significant impact on the diffusion of e-business. • An examination of the contributions of existing ICT industry in changeover to e-business. • Role of institutional environment in growth of e-business. • An assessment of the impact of e-business on transaction and co-ordination costs. • An evaluation of the prospects of e-business in India. The paper is organised as follows. The analytical framework is discussed in Section 2 whereas the hypotheses are formulated in Section 3. The data and methodology used for identifying the factors that were associated with the adoption of e-business are discussed in 4 and 5, presents the statistical results while the findings of the study are summarised in Section 6.

The paper identifies and analyses the determinants of the adoption of e-business technologies in the manufacturing sector in India. The data are drawn from 51 firms located in NOIDA. The survey was conducted during December 2000 and February 2001. Sample firms are dominated by SMEs as 73% of these firms employ less than 150 persons. Entrepreneurial characteristics such as Managing Director’s education and age, historical data of firms, and other firm-specific factors such as size of operation, export intensity, international orientation, wage rates, profit margins were included in the analysis. We also included a variable, i.e. bandwidth that represents the institutional environment created by central and local governments. The opinions of MDs on potential benefits of the adoption of e-business technologies were also considered. Sample firms were grouped into three categories, namely, (1) offline, (2) online, and (3) portal-using firms. Firms that were doing e-business using offline technologies such as messaging systems were grouped in the first category, whereas firms that were using messaging systems as well as online e-business tools such as ASPs in their URL were classified as online e-business doing firms. Portal and ERP using firms were considered as advanced users of e-business technologies and were treated in the third category. Firms were assigned ranks depending on the type of e-business technology used by them. As far as the model of e-business is concerned, 92% of firms adopted B2B e-business model. The multivariate ordered PROBIT technique was used to identify the determinants of the degree of the adoption of e-business tools. The study reveals that the firms that are more internationally oriented have adopted more advanced e-business tools. Wage rates and scale of operations have also emerged as significant determinants of the adoption of e-business technologies. The study captures the role of bandwidth in diffusion of e-business technologies. The findings of the study are by and large similar to other studies (Doms et al., 1997, Bedi, 1999, Siddharthan, 1992, Cohen, 1995, Pavitt et al., 1987 and Soete, 1997). The study shows the evidence of a positive association of type of e-business technology used by firms and the bandwidth. A study by NASSCOM (2000) suggests that availability of higher bandwidth is a pre-requisite for the penetration of Internet and web-enabled services in India. This study concludes that a very reliable and affordable telecommunication network has to be in place to harness the potentials of ICTs. The passage of the IT Bill 99 is a necessary but not sufficient condition for the success of ICTs. The Technology Convergence Bill, if passed by the Parliament at an appropriate time, is likely to boost the diffusion of Internet in the country. This in turn is expected to result in faster growth of e-business. The findings of the study suggest that there is a need to create proper local, national, and global information infrastructure to derive the maximum benefit from the ICT revolution.