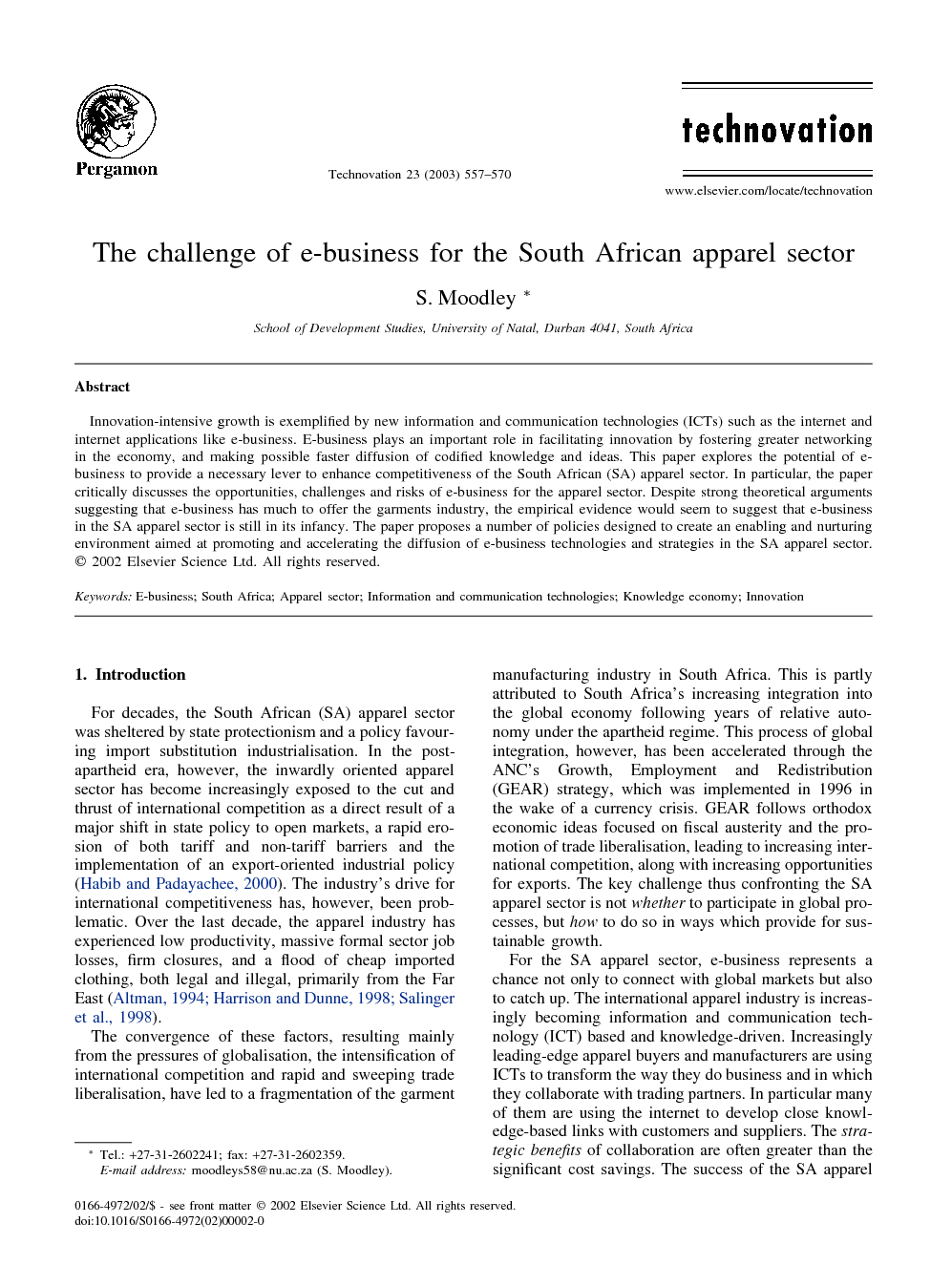 Innovation-intensive growth is exemplified by new information and communication technologies (ICTs) such as the internet and internet applications like e-business. E-business plays an important role in facilitating innovation by fostering greater networking in the economy, and making possible faster diffusion of codified knowledge and ideas. This paper explores the potential of e-business to provide a necessary lever to enhance competitiveness of the South African (SA) apparel sector. In particular, the paper critically discusses the opportunities, challenges and risks of e-business for the apparel sector. Despite strong theoretical arguments suggesting that e-business has much to offer the garments industry, the empirical evidence would seem to suggest that e-business in the SA apparel sector is still in its infancy. The paper proposes a number of policies designed to create an enabling and nurturing environment aimed at promoting and accelerating the diffusion of e-business technologies and strategies in the SA apparel sector.

For decades, the South African (SA) apparel sector was sheltered by state protectionism and a policy favouring import substitution industrialisation. In the post-apartheid era, however, the inwardly oriented apparel sector has become increasingly exposed to the cut and thrust of international competition as a direct result of a major shift in state policy to open markets, a rapid erosion of both tariff and non-tariff barriers and the implementation of an export-oriented industrial policy (Habib and Padayachee, 2000). The industry’s drive for international competitiveness has, however, been problematic. Over the last decade, the apparel industry has experienced low productivity, massive formal sector job losses, firm closures, and a flood of cheap imported clothing, both legal and illegal, primarily from the Far East (Altman, 1994, Harrison and Dunne, 1998 and Salinger, Bhorat, Flaherty and Keswell, 1998). The convergence of these factors, resulting mainly from the pressures of globalisation, the intensification of international competition and rapid and sweeping trade liberalisation, have led to a fragmentation of the garment manufacturing industry in South Africa. This is partly attributed to South Africa’s increasing integration into the global economy following years of relative autonomy under the apartheid regime. This process of global integration, however, has been accelerated through the ANC’s Growth, Employment and Redistribution (GEAR) strategy, which was implemented in 1996 in the wake of a currency crisis. GEAR follows orthodox economic ideas focused on fiscal austerity and the promotion of trade liberalisation, leading to increasing international competition, along with increasing opportunities for exports. The key challenge thus confronting the SA apparel sector is not whether to participate in global processes, but how to do so in ways which provide for sustainable growth. For the SA apparel sector, e-business represents a chance not only to connect with global markets but also to catch up. The international apparel industry is increasingly becoming information and communication technology (ICT) based and knowledge-driven. Increasingly leading-edge apparel buyers and manufacturers are using ICTs to transform the way they do business and in which they collaborate with trading partners. In particular many of them are using the internet to develop close knowledge-based links with customers and suppliers. The strategic benefits of collaboration are often greater than the significant cost savings. The success of the SA apparel sector will depend on how well the sector penetrates high value-added export markets, and on how well it exploits knowledge, skills and creativity. A daunting challenge is one of creating and nurturing a culture of innovation and change in the SA apparel sector, in order to maintain long-term sustainable competitive advantage. In the relatively small, captive SA market, competitiveness has previously revolved more around marketing effectiveness and price competition than production and systemic efficiencies. The small scale and volumes of the SA market perhaps made the viability of full-fledged business information systems questionable (Moodley, in press). However, the current pressures of globalisation and the challenge to direct overseas market expansion underscores the importance of e-business for the local apparel sector. SA apparel producers are competing in export markets characterised by ICT-driven firms, sophisticated IT infrastructures, high internet connectivity penetration, increased availability of broadband connectivity, and increased willingness to buy and sell over the internet. Building and maintaining new sources of competitive advantage are crucial for local apparel producers to break out of the low productivity, low value-adding path in which they are currently locked into. The critical question is: Can e-business provide a necessary lever to enhance competitiveness of the SA apparel sector? Time-to-market, for instance, has arisen as a critical competitive asset in the global economy, especially since shorter seasons, more rapid product cycle turnover, and smaller production runs are becoming the norm in the value-added, fashion-oriented segment of the global apparel market (Gereffi, 1999). The role of ICTs in fostering innovation-intensive growth and entrepreneurship has recently come under the academic spotlight (OECD, 2000a and OECD, 2000b). E-business is an example of a technological innovation that has potential for promoting process improvements in the SA apparel sector. The importance of technological innovation lies in the fact that economists generally attribute the greater part of measured growth to technological progress rather than to increases in the traditional inputs of labour and capital (Freeman, 1986, Porter, 1990 and Fedderke, 2000). From a development perspective, this exploratory study is important because recent evidence suggests that sectors and countries which have experienced the most rapid diffusion of ICTs, have also experienced the most rapid rates of employment and output growth (OECD, 2000a, OECD, 2000b, Baily and Lawrence, 2001 and ILO, 2001). This exploratory paper critically discusses the challenges, opportunities and risks of e-business for the SA apparel sector. While this study is far from exhaustive, it represents an important first step in understanding the potential of e-business in a developing country context.

The SA apparel sector needs to innovate to reach and remain at the frontier of ‘world-class’ competitiveness (Best, 1990 and Womack, Jones and Roos, 1990). Increasingly, international apparel buyers are using the internet to transform the way they do business and in which they collaborate with trading partners. In particular, many of them are using the internet to trade online and to develop close knowledge-based links with suppliers (Abernathy, Dunlop, Hammond and Weil, 1995, Abernathy, Dunlop, Hammond and Weil, 1999 and Gereffi, 1999). E-business technologies are, in turn, becoming increasingly important for SA apparel producers as they are integrated into global value chains and exposed to the demands of more sophisticated markets. Opportunities exist for apparel firms to participate in the re-organisation of supply chains to capture efficiency gains, and to participate in more geographically diverse supply systems. Failure to adopt e-business technologies could lead to apparel producers becoming increasingly marginalised from the international markets that they wish to supply. By not making the transition to e-business, apparel producers run the risk of becoming less competitive, affecting both their present market positions and long-term viability. The long-term challenge for SA garment-makers is to achieve: (1) strategic agility, i.e. flexibility to adapt to changing market dynamics, evolving customer needs and new channels of competition; (2) tighter control of inventory in their supply chains; (3) improved ability to dynamically respond to changing customer delivery requirements in the supply chain; and (4) better integration with input suppliers and buyers to efficiently adapt to fluctuating demand. E-business is a necessary condition to meet these challenges. However, it would appear that apparel firms are currently paying lip service to e-business ideas. Few companies understand: • the impact they can have by running their supply chains electronically; • the implications of B2B electronic trading; • the advantages of economies of scale and connectivity to speed up their production and distribution systems, that e-business offers. South Africa is lagging behind Australia, Brazil, North America, Northern Europe, Singapore and South Korea in adopting e-business, and using it to raise productivity, competitiveness, investment and employment.7 Despite strong theoretical arguments suggesting that e-business has much to offer the SA apparel industry, the empirical evidence would seem to suggest that e-business in the garments industry is still in its infancy. The uptake of e-business in the SA apparel sector remains decidedly cloudy. Yet the author is guardedly optimistic that e-business will, in the long-term, change the basis of competitive advantage in both manufacturing and retailing. The value of e-business rests squarely on the ability of the firm to extend processes and integrate with other companies, and on a broader level, to integrate and consolidate supply chains. The question is whether this potential can be translated into reality for the apparel sector in South Africa.