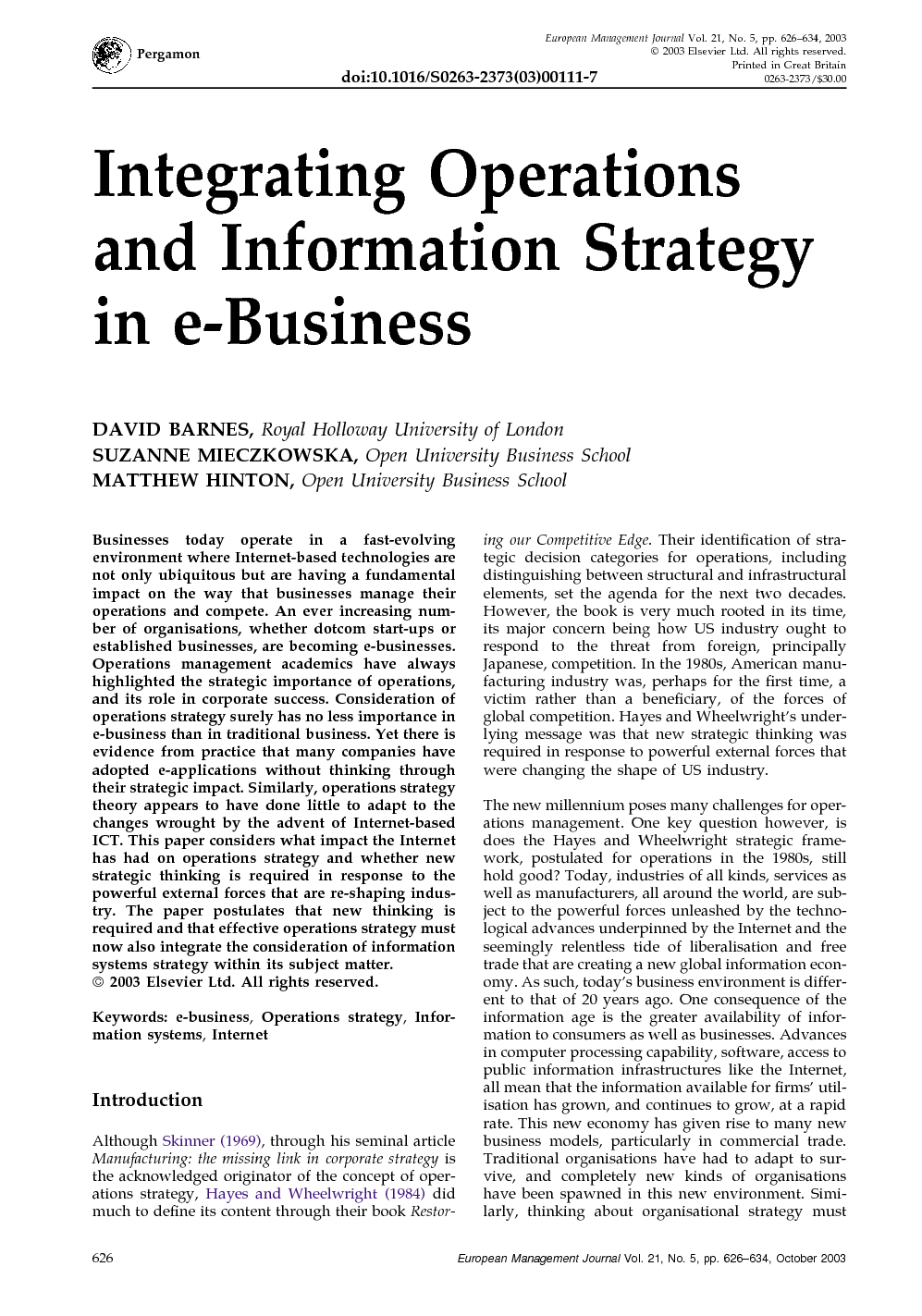 Businesses today operate in a fast-evolving environment where Internet-based technologies are not only ubiquitous but are having a fundamental impact on the way that businesses manage their operations and compete. An ever increasing number of organisations, whether dotcom start-ups or established businesses, are becoming e-businesses. Operations management academics have always highlighted the strategic importance of operations, and its role in corporate success. Consideration of operations strategy surely has no less importance in e-business than in traditional business. Yet there is evidence from practice that many companies have adopted e-applications without thinking through their strategic impact. Similarly, operations strategy theory appears to have done little to adapt to the changes wrought by the advent of Internet-based ICT. This paper considers what impact the Internet has had on operations strategy and whether new strategic thinking is required in response to the powerful external forces that are re-shaping industry. The paper postulates that new thinking is required and that effective operations strategy must now also integrate the consideration of information systems strategy within its subject matter.

Although Skinner (1969), through his seminal article Manufacturing: the missing link in corporate strategy is the acknowledged originator of the concept of operations strategy, Hayes and Wheelwright (1984) did much to define its content through their book Restoring our Competitive Edge. Their identification of strategic decision categories for operations, including distinguishing between structural and infrastructural elements, set the agenda for the next two decades. However, the book is very much rooted in its time, its major concern being how US industry ought to respond to the threat from foreign, principally Japanese, competition. In the 1980s, American manufacturing industry was, perhaps for the first time, a victim rather than a beneficiary, of the forces of global competition. Hayes and Wheelwright’s underlying message was that new strategic thinking was required in response to powerful external forces that were changing the shape of US industry. The new millennium poses many challenges for operations management. One key question however, is does the Hayes and Wheelwright strategic framework, postulated for operations in the 1980s, still hold good? Today, industries of all kinds, services as well as manufacturers, all around the world, are subject to the powerful forces unleashed by the technological advances underpinned by the Internet and the seemingly relentless tide of liberalisation and free trade that are creating a new global information economy. As such, today’s business environment is different to that of 20 years ago. One consequence of the information age is the greater availability of information to consumers as well as businesses. Advances in computer processing capability, software, access to public information infrastructures like the Internet, all mean that the information available for firms’ utilisation has grown, and continues to grow, at a rapid rate. This new economy has given rise to many new business models, particularly in commercial trade. Traditional organisations have had to adapt to survive, and completely new kinds of organisations have been spawned in this new environment. Similarly, thinking about organisational strategy must also change in response to the new corporate landscape. As Sampler and Short (1998) state, the new ‘information-driven competitive dynamics require researchers to develop new theoretical constructs and managerial perspectives to re-evaluate the firm and its extended set of relationships [because] failure to manage information and information-related resources can produce undesirable side-effects.’ From Skinner (1969) to more recent times, operations management academics have always highlighted the strategic importance of operations, and its role in corporate success. The consideration of operations strategy can surely be of no less importance in e-business than in traditional business. Yet there appears to be a distinct lack of literature focussed on the strategic implications of e-commerce for operations management. As Spring (2000) notes in an editorial in the International Journal of Operations and Production Management, ‘it is high time we as a discipline provided some critical analysis’. Yet much of the current literature still remains prescriptive, often superficially so, concentrating on computer software and infrastructure solutions, or ‘defining the borderlines of e-commerce, classifying the ways it takes place, outlining the complementarities between the features of the traded goods and the growth potential of specific businesses’ (Mariotti and Sgobbi, 2001), rather than focussing on strategy which is based on established theory and practice. And there is also considerable evidence that many companies have adopted e-applications, without thinking through their strategic impact. As Lumpkin et al. (2002) say, ‘perhaps the most important question is how to strategize in the era of the Internet’. This in turn raises the question of whether ‘the rules [have] changed or can traditional models of competitive strategy be used to achieve sustainable advantage?’(Ibid.). In fact, thinking about operations strategy appears to have moved on very little in the last 20 years. The lack of advance in approaches to operations strategy ought now to be, with the advent of the new economy, a matter of particular concern. Urgent consideration needs to be given to the strategic impact of changes wrought by the Internet on operations. Loebbecke and Powell (2002) state, ‘while the pressure may have eased as the frenzy of “dotcom” activities has subsided, the search for business models and for profit from the Internet continues’. So if, as is often asserted, the Internet changes everything, what has changed in operations strategy? Some twenty years on from Hayes and Wheelwright, what new strategic thinking is once again required in response to the powerful external forces that are re-shaping industry? This paper sets out to explore the strategic implications for operations management of the growing use of the Internet-based information and communications technologies (ICTs) on which the operations of e-businesses are based. The paper opens by considering the key features of the global information economy and discusses the challenges of doing business in this new economy. In the light of this analysis, Hayes and Wheelwright’s strategic decision areas for operations are then examined to determine the extent to which they are still relevant in today’s global information economy. The paper concludes by suggesting new ways in which the consideration of operations strategy might be framed in the new economy, examining in particular, how ideas from information systems strategy might be integrated into operations strategy.

The new global information economy is very different from the world that existed some twenty years ago. Then, most advanced economies were dominated by large-scale manufacturing industries that operated predominantly within their national markets. And it was in what has now become a largely defunct world that much of the thinking that still dominates operations management, and particularly operations strategy, was developed. A key question that the operations management community needs to consider is whether the tools, models and concepts from the old economy can still serve operations management in new economy organisations and their evolving business models. Jallat and Capek (2001) maintain that although ‘most companies have focused on adapting their operations in response to the new information technology’, the process has not ended, and organisations ‘must continue to redefine their strategies as the impact of e-commerce widens’. The challenge of the new economy is certainly one that requires a corporate strategic response. Ferguson (2000) highlights the immediate impact that a lack of an effective e-strategy will have, noting that: As many companies [try] to become e-businesses or add an Internet element to their bricks-and-mortar business models, analysts project few e-businesses will achieve long-term results and many will disappear […] because of lack of planning and effective implementation. Hackbarth and Kettinger (2000) are more prescriptive, but the message is still the same: E-business has the potential to propel a company to ‘break out’ of existing strategic constraints and radically alter business processes, strengthen customer and supplier ties, and open up new markets. However, to achieve this success, a company must rethink corporate strategy in a way that capitalizes on information asymmetries, leverages customer and partner relationships, and tailors the right fit of [competition] in its business model. This paper has argued that new thinking in operations strategy is required to match that at the corporate level. Although the H & W model of strategic decision areas for operations still has currency in the new economy, it needs some adaptation for e-businesses. In particular, it needs to integrate an explicit consideration of information systems strategy within its subject matter. This needs to incorporate a consideration of the ICT architecture (i.e. the computer hardware, and its associated systems and interconnecting telecommunications networks) and how that ICT architecture is utilised and managed within the H & W strategic decision areas. The aim of the paper has been to raise awareness of what is a key operational issue for the e-businesses that populate the new economy. Its motive in so doing is to prompt more academic interest into what so far has been a neglected area of study. There is a clear need for more research to advance the current state of knowledge. Operations strategists can usefully look outside of their own discipline to enhance their theoretical understanding. As such, it is hoped that this paper might encourage more interdisciplinary collaboration between operations and information management academics. Additionally, empirical research is required to see how, and to what extent e-businesses are integrating their operations and information strategies. Such research also calls for an interdisciplinary approach if our understanding of operations in the new global information economy is to be advanced significantly.