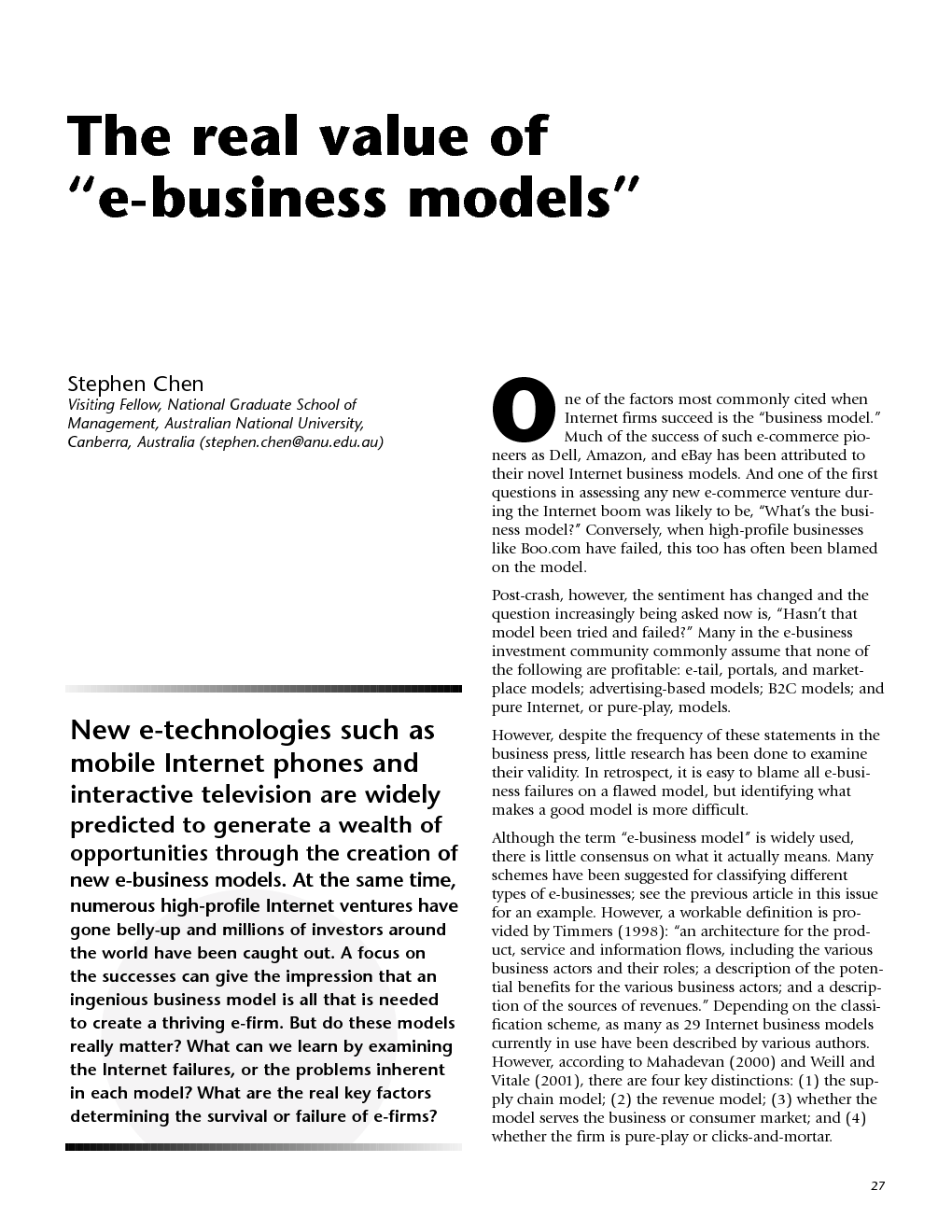 New e-technologies such as mobile Internet phones and interactive television are widely predicted to generate a wealth of opportunities through the creation of new e-business models. At the same time, numerous high-profile Internet ventures havegone belly-up and millions of investors around the world have been caught out. A focus on the successes can give the impression that an ingenious business model is all that is needed to create a thriving e-firm. But do these models really matter? What can we learn by examining the Internet failures, or the problems inherent in each model? What are the real key factors determining the survival or failure of e-firms?

For many years, Sun Microsystems enjoyed considerable success by bucking the industry trend toward standardized chips and software (Tam, 2003). Sun made the strategic choice to offer more powerful and more expensive computer solutions based on proprietary hardware and software, which worked well as long as Sun was able to maintain a performance advantage. However, standardized chips eventually matched the performance of Sun's proprietary chips, and standardized software offered functionality similar to Sun's. As a result, Sun has seen its quarterly sales drop by more than 40% since their peak in 2001, and its stock price decline to under $4 per share from a high of over $60 per share. In late 2002, after a probing meeting with the head of Sun's low-end server business, Sun's CEO agreed that the firm would add a line of cheaper servers based on Intel chips. This strategic choice marked a clear departure from Sun's existing business model, but there is no evidence that this change has helped the company's business. In fact, revenues for the quarter ending June 30, 2003 were down 13% from a year earlier. Indeed, one might reasonably conclude that Sun's “business model” was and remains broken. Certainly, the levels of misdirection and confusion in Sun's engineering and sales organizations, reported recently in the Wall Street Journal, suggest that, at a minimum, Sun is experiencing some problems communicating its new model internally. Furthermore, there is little evidence that Sun executives considered issues of internal consistency as they reviewed alternative strategic choices. In particular, the choice to offer less expensive servers needs to be evaluated in terms of the added pressure this will place on Sun's more expensive hardware. In addition, a fundamental element of Sun's traditional strategy has been plowing a significant portion of revenue back into R&D in an effort to maintain its performance advantage. Making the strategic choice to offer less expensive solutions will likely have a significant impact on Sun's ability to maintain its current R&D funding levels, which in turn will have implications regarding its ability to compete on the basis of higher performing solutions. It is hard to argue that there is a single “right” strategic answer for Sun. However, it is similarly difficult to believe that all of the cause-and-effect relationships within the new business model have been carefully considered. Based on media reports and customer complaints, it is fairly obvious that Sun's executives have not been successful in explaining their new model. While business models can be powerful tools for analyzing, implementing, and communicating strategic choices, there is no evidence that Sun has successfully harnessed that power. Over the past few years, “business models” have surged into the management vocabulary. In the mid-1990s,“dot-com” firms pitched business models to attract funding. Now, companies of all sorts in virtually every industry rely on the concept as well; in fact, approximately 27% of Fortune 500 firms used the term in their 2001 annual reports. The media have certainly gotten on board also. Within major magazines and journals, only one article in 1990 used the term “business model” three times or more; by 2000, well over 500 articles fell into that category. While it has become quite fashionable to discuss business models, many executives remain confused about how to use the concept. For example, in a recent Accenture study, in which one of the authors took part, 70 executives from 40 companies were interviewed regarding their company's core logic for creating and capturing value: the basis of a business model. Surprisingly, 62% had a difficult time describing succinctly how their own company made money (Linder & Cantrell, 2000), and it appears that Sun's executives may be similarly confused. Strategist Michael Porter (2000) has referred to the phrase “business model” as part of the “Internet's destructive lexicon”; we disagree. We believe that business models can in fact play a positive and powerful role in corporate management. Before exploring that role in more detail, it is first necessary to understand exactly what constitutes a business model.

The survival and prosperity of all for-profit organizations is directly linked to their ability to both create and capture value; therefore, business models are applicable to all these. Of course, the strategic decision areas confronting each organization will vary based on numerous factors such as the firm's age, industry, industry concentration, customer type, government regulations, and so on. At the same time, an organization's business model is never complete as the process of making strategic choices and testing business models should be ongoing and iterative. While there are certainly no guarantees, we contend that the probability of long-term success increases with the rigor and formality with which an organization tests its strategic options through business models. Business models provide a powerful way for executives to analyze and communicate their strategic choices. Although there is some chance that firms with sloppily formulated business models will succeed in the marketplace, the probability is low since the core logic for value creation and capture will not have been clearly thought through. As the old saying suggests, blind squirrels do occasionally find acorns, but, until they do, there is a lot of wasted effort. Just like firms that burn through their working capital, the squirrels may run out of energy before they achieve their prize.