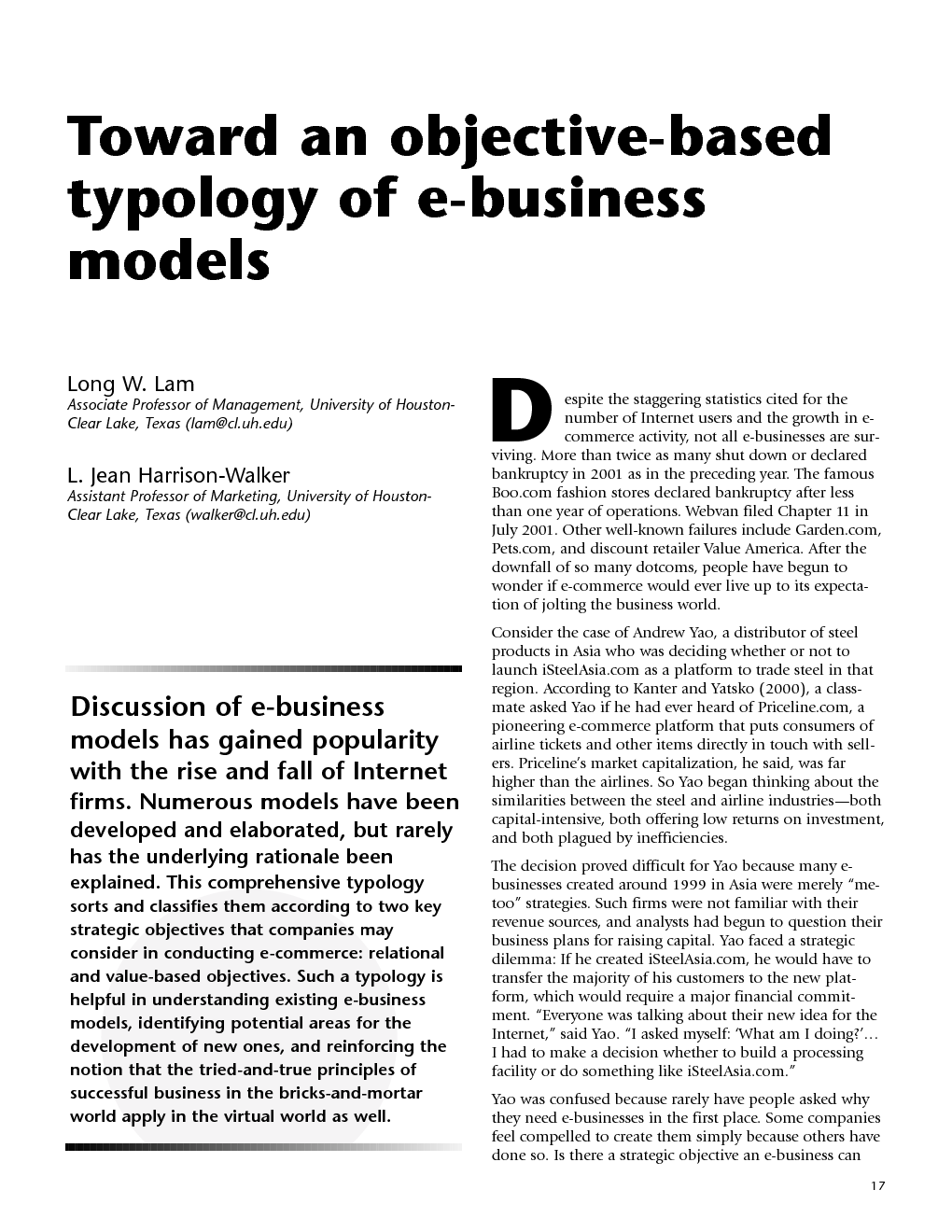 Discussion of e-business models has gained popularity with the rise and fall of Internet firms. Numerous models have been developed and elaborated, but rarely has theunderlying rationale been explained. This comprehensive typologysorts and classifies them according to two keystrategic objectives that companies may consider in conductinge-commerce: relational and value-based objectives. Such a typology is helpful in understanding existing e-business models, identifying potential areas for the development of new ones, and reinforcing thenotion that the tried-and-true principles of successful business in the bricks-and-mortarworld apply in the virtual world as well

Despite the staggering statistics cited for the number of Internet users and the growth in e- commerce activity, not all e-businesses are sur- viving. More than twice as many shut down or declared bankruptcy in 2001 as in the preceding year. The famous Boo.com fashion stores declared bankruptcy after less than one year of operations. Webvan filed Chapter 11 in July 2001. Other well-known failures include Garden.com, Pets.com, and discount retailer Value America. After the downfall of so many dotcoms, people have begun to wonder if e-commerce would ever live up to its expecta- tion of jolting the business world. Consider the case of Andrew Yao, a distributor of steel products in Asia who was deciding whether or not to launch iSteelAsia.com as a platform to trade steel in that region. According to Kanter and Yatsko (2000), a class- mate asked Yao if he had ever heard of Priceline.com, a pioneering e-commerce platform that puts consumers of airline tickets and other items directly in touch with sell- ers. Priceline’s market capitalization, he said, was far higher than the airlines. So Yao began thinking about the similarities between the steel and airline industries—both capital-intensive, both offering low returns on investment, and both plagued by inefficiencies. The decision proved difficult for Yao because many e- businesses created around 1999 in Asia were merely “me- too” strategies. Such firms were not familiar with their revenue sources, and analysts had begun to question their business plans for raising capital. Yao faced a strategic dilemma: If he created iSteelAsia.com, he would have to transfer the majority of his customers to the new plat- form, which would require a major financial commit- ment. “Everyone was talking about their new idea for the Internet,” said Yao. “I asked myself: ‘What am I doing?’... I had to make a decision whether to build a processing facility or do something like iSteelAsia.com.” Yao was confused because rarely have people asked why they need e-businesses in the first place. Some companies feel compelled to create them simply because others have done so. Is there a strategic objective an e-business canfulfill that an existing bricks-and-mortar firm cannot? If so, then business models should clarify those objectives in the first place. In delineating strategic objectives for ex- pansion into e-business, a firm must identify the model appropriate to it—the model it will use in pursuit of its long-term performance goals. There may be as many as 50 revenue-generating business models on the Internet. Some, such as the product sales vs. merchant models, are so closely related that one wonders if they are really fundamentally different methods. Some business strategies, such as the infomediary or information collection models, are so immediately recognized and accepted that one could argue they are not business mod- els at all. To make matters worse, there is currently no sin- gle, cogent, and comprehensive typology of Internet busi- ness models to point to. “Defining, selecting and catego- rizing business models is a difficult and arbitrary process,” maintain Strauss and Frost (2001). Our purpose here is to provide a typology of e-business models that speaks clearly regarding strategic objectives. The typology we have developed can assist companies in their decision on whether or not to expand into e-busi- ness and, if so, how their e-business can tie in to the cor- porate mission and objectives

The e-business world has experienced a boom and bust in a relatively short period of time. Now that the dust has settled, participants in this bandwagon phenomenon are wondering why some failed and others were able to weather the storm. While one article is certainly not able to provide satisfactory answers to this question, we believe that much of e-busi- ness success can be attributed to a viable business model. Unfortunately, there is no single coherent framework that explains the rationale behind the numerous models cre- ated in the virtual space. Here, the proposed typology classifies existing business models on the Internet into six broad categories based on their relational and value-based objectives. The intent has been to provide a framework that may be useful for understanding strategically why e- businesses are created, how they should be positioned, and how they may add value to the company.