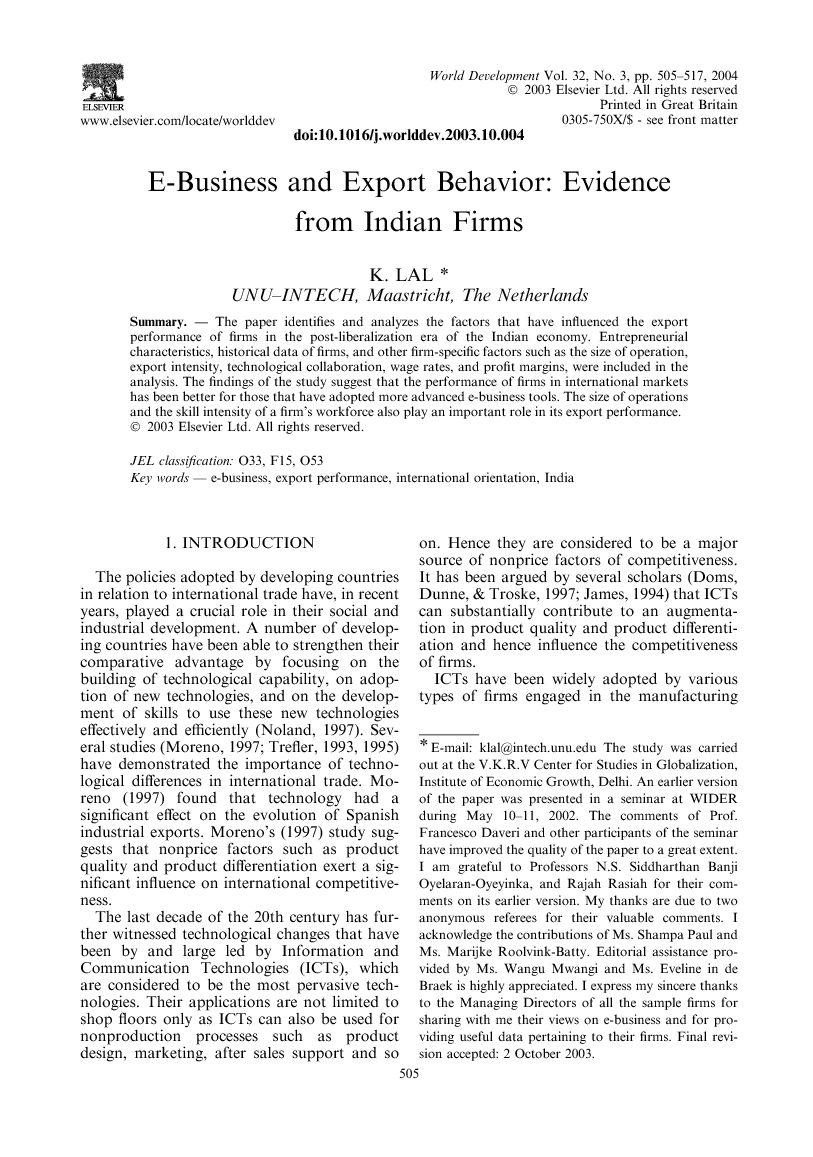 The paper identifies and analyzes the factors that have influenced the export performance of firms in the post-liberalization era of the Indian economy. Entrepreneurial characteristics, historical data of firms, and other firm-specific factors such as the size of operation, export intensity, technological collaboration, wage rates, and profit margins, were included in the analysis. The findings of the study suggest that the performance of firms in international markets has been better for those that have adopted more advanced e-business tools. The size of operations and the skill intensity of a firm’s workforce also play an important role in its export performance.

The policies adopted by developing countries in relation to international trade have, in recent years, played a crucial role in their social and industrial development. A number of developing countries have been able to strengthen their comparative advantage by focusing on the building of technological capability, on adoption of new technologies, and on the development of skills to use these new technologies effectively and efficiently (Noland, 1997). Several studies (Moreno, 1997; Trefler, 1993 and Trefler, 1995) have demonstrated the importance of technological differences in international trade. Moreno (1997) found that technology had a significant effect on the evolution of Spanish industrial exports. Moreno’s (1997) study suggests that nonprice factors such as product quality and product differentiation exert a significant influence on international competitiveness. The last decade of the 20th century has further witnessed technological changes that have been by and large led by Information and Communication Technologies (ICTs), which are considered to be the most pervasive technologies. Their applications are not limited to shop floors only as ICTs can also be used for nonproduction processes such as product design, marketing, after sales support and so on. Hence they are considered to be a major source of nonprice factors of competitiveness. It has been argued by several scholars (Doms, Dunne, & Troske, 1997; James, 1994) that ICTs can substantially contribute to an augmentation in product quality and product differentiation and hence influence the competitiveness of firms. ICTs have been widely adopted by various types of firms engaged in the manufacturing and service sectors, in both developed and developing countries. The justifications for their adoption include the perceived links between ICTs and gains in productivity (Kraemer & Dedrick, 1994; Lichtenberg, 1995), the improvement in product quality, and increased flexibility in manufacturing processes (Lal, 1996). A great deal of literature on this subject is concerned with the factors that determine the adoption of ICTs (Brynjolfsson & Hitt, 1996; Doms et al., 1997; Lal, 1999a). By contrast, we propose to analyze the consequences of the use of electronic-business (e-business) practices on the export performance of firms, using India as a case study. In essence, e-business is about business innovation, about serving new and changing markets. Through e-business, companies seek to reshape the way they go to markets and the manner in which customers buy products and services. E-business also aims at helping adopters to reach new customers more efficiently and effectively. E-business transforms the exchange of goods, services, information, and knowledge through the use of ICTs. An OECD (2002) study, focusing on e-commerce, defines it as …the sale or purchase of goods or services, whether between business, households, individuals, governments, and other public or private organizations, conducted over computer mediated networks. The goods and services are ordered over those networks, but the payment and the ultimate delivery of the good or service may be conducted on or off-line (p. 89). The OECD (2002) study examines the application of ICTs in commercial activities, which is one of the business processes. Whereas e-business encompasses applications of ICTs in all business processes such as office automation, production processes, coordination with other plants, customer relation management, supply chain management, and management of distribution networks. This study investigates consequences of the adoption of e-business rather than e-commerce. The main objectives of the study are to identify and analyze the factors that influenced the adoption of e-business by small and medium-sized enterprises (SMEs) in India and consequences of the adoption on export performance. SMEs were selected for the study, as they constitute a major source of employment and foreign exchange. The following section presents a partial literature survey of the adoption of e-business.

The paper identifies and analyzes the factors that have influenced the export performance of firms. The data were drawn from 51 firms located in NOIDA. Historical, financial, and technological data were collected through a semi-structured questionnaire. Historical data included the background of managing director and age of firm whereas financial data (1999–2000) consist of sales turnover, investment on ICTs, wage bill, exports, imports, profit after tax, and value added, etc. Technological data included the type of e-business tool adopted and the bandwidth being used by firms. Data on technological and financial collaborations with multinational companies were also collected. The sample firms were dominated by SMEs as 73% of these firms employed less than 150 persons. Firm-specific factors such as size of operation, intensity of the adoption of e-business technologies, skill intensity, labor productivity, international orientation, wage rates, profit margins were included in the analysis. A censored regression model, i.e., Tobit, was used to identify determinants of export performance of firms. The results of the study show that the type of technology used for e-business and the skill intensity of the workforce were the two most significant factors found to influence the export performance of firms. The scale of operations has also emerged as a significant determinant of export performance. The study reveals that the labor productivity of export-oriented firms was higher than that of nonexporting units. The findings of the study are by and large similar to other studies (Bedi, 1999; Bernard & Wagner, 2001; Doms et al., 1997; Pavitt et al., 1987). The study captures the important role being played by the type of technology used for e-business by the sample firms in influencing their export performance. Identification of factors that influence the adoption of e-business technologies is beyond scope of this paper. Several studies (Lal, 2001; Mehta, 2000), however, suggest that communication technology network is a driving force behind the diffusion of e-business. The study by Lal (2001) found that the diffusion of e-business is strongly associated with the bandwidth. A study by Mehta (2000) suggests that availability of higher bandwidth is a prerequisite for the penetration of the Internet and web-enabled services in India. Findings of this study suggest that it is imperative to create a conducive environment for greater diffusion of e-business technologies that in turn could augment the export performance of firms. The implications of findings of the study are twofold. One, an appropriate environment for the effective adoption of e-business has to be in place. The limited use of e-business will have serious repercussions on the performance of firms in international markets. If Indian firms that deal in international markets are unable to strengthen the applicability of e-business in areas such as online financial transaction and monitoring of status of consignments etc., they are likely to lose foreign partners. Although the Government of India has taken several measures to encourage greater diffusion of ICTs, access to high speed communication networks at competitive price might enhance the diffusion of e-business technologies, which is in turn likely to influence export performance. The formulation and enactment of communication technology convergence regulations can facilitate access to a broad range of communication networks. For instance, if last mile connectivity is allowed through cable network, which is primarily meant for video communication, it might result is explosive adoption of e-business. The Government of India can also encourage the adoption of this new technology among export-oriented firms by continuing export incentives such as tax holidays on the value of goods and services traded electronically. The second implication is related to policies on collective learning and training facilities aimed at SMEs. The study has shown that the incorporation of e-business practices, coupled with a higher skilled workforce, can enable firms to perform better in export markets. Hence policy makers need to target learning and training facilities for SMEs. This can be achieved by providing logistical support to industry associations located in SME clusters. The industry associations in turn can take advantage of an “industry-university link” program initiated by the Government of India in producing skilled labor for the use of SMEs. We conclude, therefore, that it is imperative for the Government of India to provide proper institutional support to export-oriented firms for the effective use of e-business, which would strengthen export performance. If it does not take proactive measures to speed up the adoption of e-business, India might lose part of its export share in international markets.