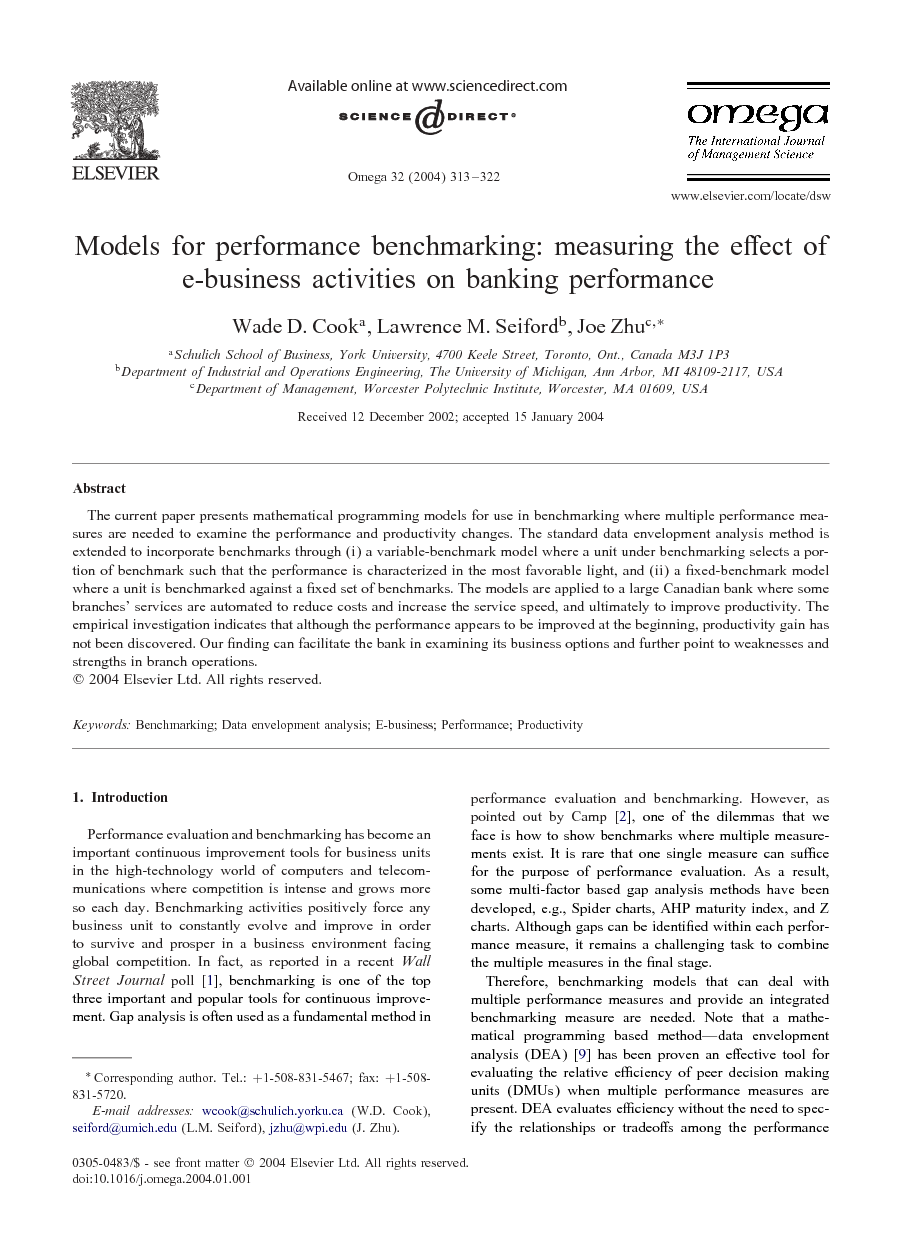 The current paper presents mathematical programming models for use in benchmarking where multiple performance measures are needed to examine the performance and productivity changes. The standard data envelopment analysis method is extended to incorporate benchmarks through (i) a variable-benchmark model where a unit under benchmarking selects a portion of benchmark such that the performance is characterized in the most favorable light, and (ii) a fixed-benchmark model where a unit is benchmarked against a fixed set of benchmarks. The models are applied to a large Canadian bank where some branches’ services are automated to reduce costs and increase the service speed, and ultimately to improve productivity. The empirical investigation indicates that although the performance appears to be improved at the beginning, productivity gain has not been discovered. Our finding can facilitate the bank in examining its business options and further point to weaknesses and strengths in branch operations

Performance evaluation and benchmarking has become an important continuous improvement tools for business units in the high-technology world of computers and telecommunications where competition is intense and grows more so each day. Benchmarking activities positively force any business unit to constantly evolve and improve in order to survive and prosper in a business environment facing global competition. In fact, as reported in a recent Wall Street Journal poll [1], benchmarking is one of the top three important and popular tools for continuous improvement. Gap analysis is often used as a fundamental method in performance evaluation and benchmarking. However, as pointed out by Camp [2], one of the dilemmas that we face is how to show benchmarks where multiple measurements exist. It is rare that one single measure can suffice for the purpose of performance evaluation. As a result, some multi-factor based gap analysis methods have been developed, e.g., Spider charts, AHP maturity index, and Z charts. Although gaps can be identified within each performance measure, it remains a challenging task to combine the multiple measures in the final stage. Therefore, benchmarking models that can deal with multiple performance measures and provide an integrated benchmarking measure are needed. Note that a mathematical programming based method—data envelopment analysis (DEA) [9] has been proven an effective tool for evaluating the relative efficiency of peer decision making units (DMUs) when multiple performance measures are present. DEA evaluates efficiency without the need to specify the relationships or tradeoffs among the performance measures prior to the computation, and DEA identifies an efficient frontier (tradeoff curve) along with efficiency scores for all DMUs. This type of efficiency evaluation has also been regarded as benchmarking [3], since the efficient frontier identified can be regarded as an empirical benchmark frontier. However, when a new DMU outperforms the identified efficient frontier, a new frontier is generated by DEA. As a result, we do not have the same benchmark for other new DMUs, i.e., the original DEA method cannot be viewed as a multi-criteria performance benchmarking tool. Zhu [18] developed two DEA-based benchmarking models where the identified efficient frontier (benchmark) remains the same during the benchmarking process. One is called variable-benchmark model where each DMU under benchmarking is allowed to choose a portion of benchmark frontier so that the benchmarking performance of the DMU is characterized in the most favorable light. The other is called fixed-benchmark model where each DMU is benchmarked against fixed components from the benchmark frontier. The current study applies the two DEA-based benchmarking models to a large Canadian bank (thereafter, CBANK) in measuring the effectiveness service delivery configuration. There are many DEA studies on banking performance. For example, Sherman and Gold [4] published the first significant DEA bank analysis and started what turned out to be a long list of DEA applications to banking from several different angles [5]. Sherman and Ladino [6] reported that a use of DEA in the restructuring process of the 33 branches of a US bank led to an annual savings of over $6 million. Oral and Yolalan [7] introduced a DEA model that forced each of 20 branches in a sample to compare itself with the global leader—a Turkish bank. According to the Canadian Bankers Association, the Canadian banking industry includes 16 domestic banks, 31 foreign bank subsidiaries and 21 foreign bank branches operating in Canada. In total, these institutions manage over $1.7 trillion in assets. Technology innovation is the most important factor contributing to the dramatic changes taking place in Canada's financial services marketplace. Canada's bank financial groups have led the way in providing Canadians with many new ways to access financial services. Canadians have embraced debit cards, ABMs, telephone banking, the internet and hand-held wireless devices. Advances in technology continue to revolutionize the industry, breaking down geographic barriers and permitting customers to access financial services from virtually anywhere, at any time. In recent years, Canada's banks have demonstrated a consistent performance, with profits rising significantly from 1995 to 1997. The rest of the paper is organized as follows. The next section introduces some basic DEA models. We then introduce our DEA-based benchmarking models described in Zhu [18]. The models are applied to benchmark a set of e-branches against the best-practice of traditional branches. Concluding remarks are given at last.

To aid the CBANK in undertaking e-business activities, the current study is directed at evaluating and benchmarking branch bank performance. Two DEA-based benchmarking models are developed to study the change in performance that branches undergo when moving from the old to the new structure where transactions are automated. The study reveals that e-branches (new structure) did not exhibit productivity gain when compared to both the best practice of traditional branches and e-branches’ predecessors. This finding allows the bank to examine its business options, and gain an understanding of what does not work well in terms of the makeup of new branches. This further can point to weaknesses and strengths in e-branch operations. The current study provides tools needed to monitor the performance change and further facilitates the development of the best strategic option for the organization with regard to branch makeup. Finally, as one reviewer points out, one general issue that has not been addressed by banks and consequently cannot realistically be solved by this paper relates to the transactions that occur in ATMs versus human tellers and customer service representatives versus e-transactions in a bank. For example, if a customer goes to a teller to cash a cheque and have to wait on line and fill out the cheque, the customer may want to economize on his/her time and take a larger amount of cash out than he/she would take from an ATM. The multitude of ATMs has resulted in many taking out small amounts of cash frequently. This means more transactions but these added transactions are not accompanied by proportionately higher resource usage or costs to the bank. The cost of servicing an ATM is not proportional to the transactions. In that case, the total number of transactions will be greater with ATM transactions, so the cost per transaction and similar ratios cannot be used to determine if there is an increase in real efficiently. This is clearly an issue for future researches.