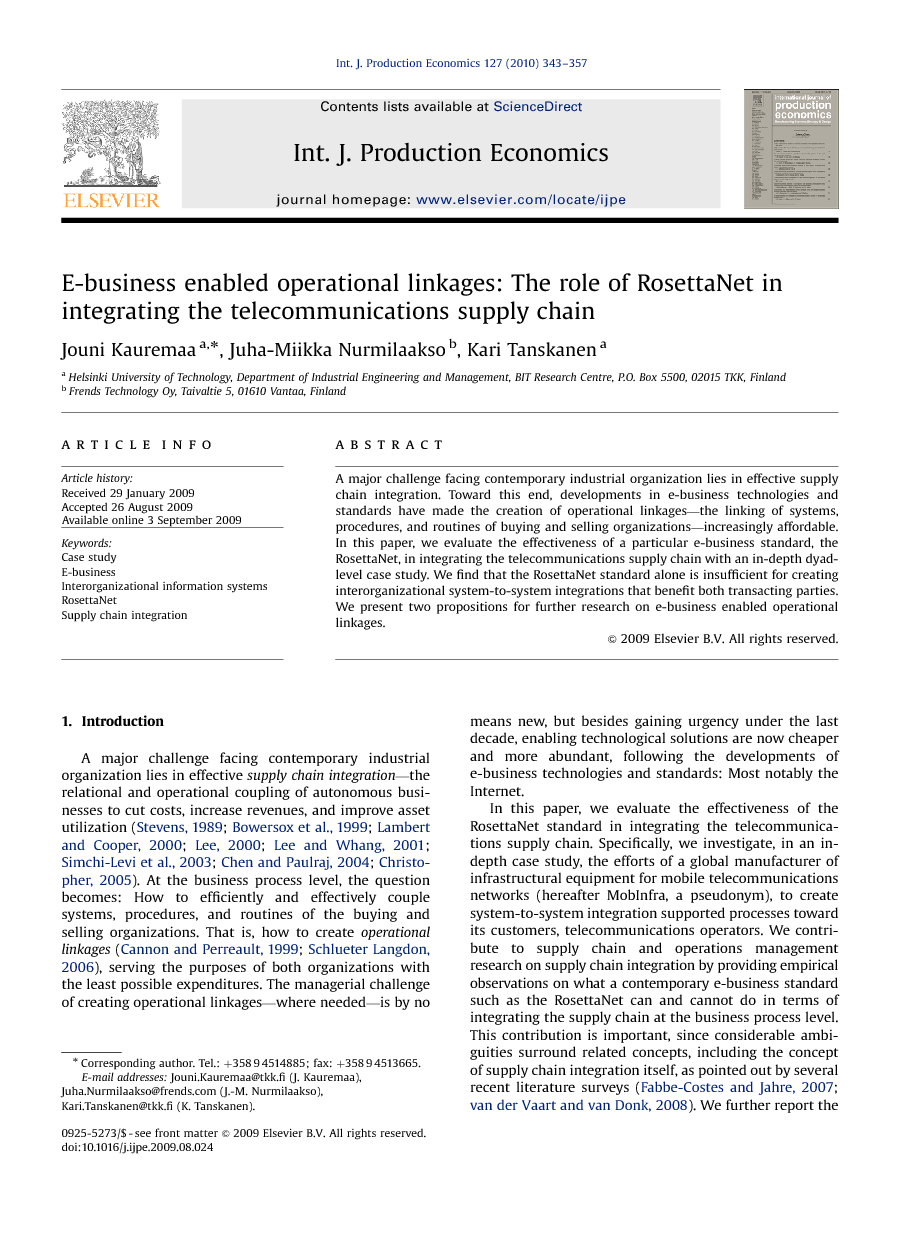 A major challenge facing contemporary industrial organization lies in effective supply chain integration. Toward this end, developments in e-business technologies and standards have made the creation of operational linkages—the linking of systems, procedures, and routines of buying and selling organizations—increasingly affordable. In this paper, we evaluate the effectiveness of a particular e-business standard, the RosettaNet, in integrating the telecommunications supply chain with an in-depth dyad-level case study. We find that the RosettaNet standard alone is insufficient for creating interorganizational system-to-system integrations that benefit both transacting parties. We present two propositions for further research on e-business enabled operational linkages.

A major challenge facing contemporary industrial organization lies in effective supply chain integration—the relational and operational coupling of autonomous businesses to cut costs, increase revenues, and improve asset utilization (Stevens, 1989; Bowersox et al., 1999; Lambert and Cooper, 2000; Lee, 2000; Lee and Whang, 2001; Simchi-Levi et al., 2003; Chen and Paulraj, 2004; Christopher, 2005). At the business process level, the question becomes: How to efficiently and effectively couple systems, procedures, and routines of the buying and selling organizations. That is, how to create operational linkages (Cannon and Perreault, 1999; Schlueter Langdon, 2006), serving the purposes of both organizations with the least possible expenditures. The managerial challenge of creating operational linkages—where needed—is by no means new, but besides gaining urgency under the last decade, enabling technological solutions are now cheaper and more abundant, following the developments of e-business technologies and standards: Most notably the Internet. In this paper, we evaluate the effectiveness of the RosettaNet standard in integrating the telecommunications supply chain. Specifically, we investigate, in an in-depth case study, the efforts of a global manufacturer of infrastructural equipment for mobile telecommunications networks (hereafter MobInfra, a pseudonym), to create system-to-system integration supported processes toward its customers, telecommunications operators. We contribute to supply chain and operations management research on supply chain integration by providing empirical observations on what a contemporary e-business standard such as the RosettaNet can and cannot do in terms of integrating the supply chain at the business process level. This contribution is important, since considerable ambiguities surround related concepts, including the concept of supply chain integration itself, as pointed out by several recent literature surveys (Fabbe-Costes and Jahre, 2007; van der Vaart and van Donk, 2008). We further report the discovery of several enabling mechanisms necessary to create e-business enabled operational linkages in the studied context. In particular, we emphasize the importance of appropriate dyadic standardization of trade item data. The structure of the paper is as follows. We first review prior literature on e-business enabled operational linkages and the RosettaNet standard in interorganizational system-to-system integration (Section 2). Next, we describe our research design (Section 3). This is followed by the exhibit of our empirical results (Section 4). In Section 5, we conclude our study and develop propositions for further research. Evaluation of contribution and notes on further research follow.

Our findings point to the limits of RosettaNet-based integration: The matter manifests itself in a more nuanced format than just putting the standard messages as given by RosettaNet in place. Essentially, we discovered that the RosettaNet standard alone was insufficient for creating system-to-system integrations that benefited both implementing parties at the dyadic level. This finding is important in light of the suggestion that newer e-business standards, such as the RosettaNet, would overcome the challenges of traditional EDI standards (Reimers, 2001; Goldfarb and Prescod, 2004). In particular, by adding to the syntactic (common language) and semantic (meaning) level of traditional EDI standards, the pragmatic level (intention of messaging) (Kubicek, 1992; Bussler, 2003) RosettaNet type of newer e-business standards have been claimed help to create more flexible and economical interorganizational system-to-system integrations (Reimers, 2001; Johnston et al., 2007). In particular we note that: (1) EDI does not have to be over value-added networks (VAN); indeed, Internet-based EDI is a growing area (Huang et al., 2008); (2) RosettaNet still calls for specific messaging infrastructure, i.e. a dedicated server, as is called for in EDI-based transactions, thus making RosettaNet, as the traditional EDI, still more accessible to larger trading entities; and (3) RosettaNet does not remove the need for interorganizational agreements and business process adjustments. To address the observed shortcomings of RosettaNet-based integrations more systematically we next conclude this paper by developing two propositions for further research.