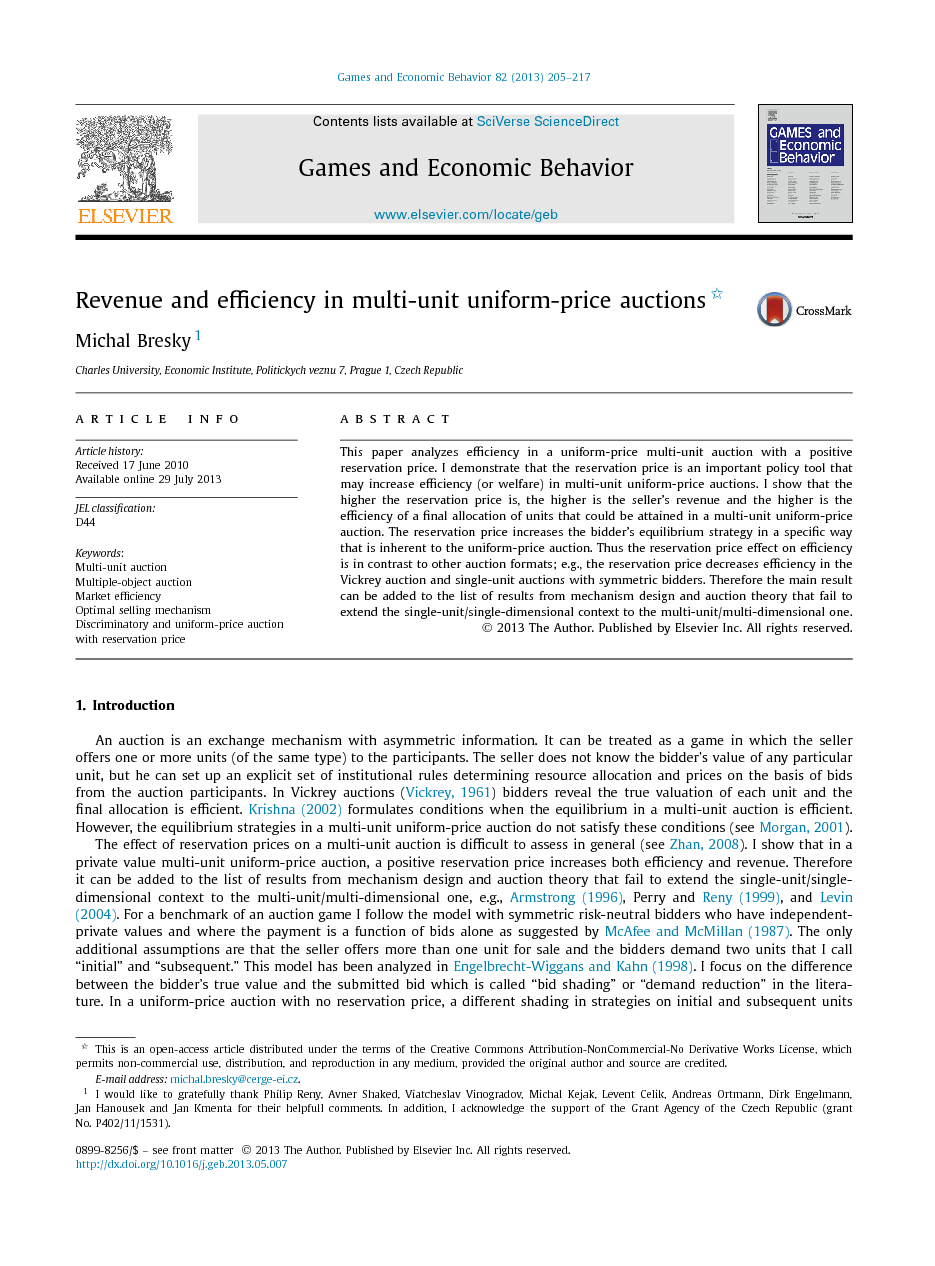 An auction is an exchange mechanism with asymmetric information. It can be treated as a game in which the seller offers one or more units (of the same type) to the participants. The seller does not know the bidderʼs value of any particular unit, but he can set up an explicit set of institutional rules determining resource allocation and prices on the basis of bids from the auction participants. In Vickrey auctions (Vickrey, 1961) bidders reveal the true valuation of each unit and the final allocation is efficient. Krishna (2002) formulates conditions when the equilibrium in a multi-unit auction is efficient. However, the equilibrium strategies in a multi-unit uniform-price auction do not satisfy these conditions (see Morgan, 2001). The effect of reservation prices on a multi-unit auction is difficult to assess in general (see Zhan, 2008). I show that in a private value multi-unit uniform-price auction, a positive reservation price increases both efficiency and revenue. Therefore it can be added to the list of results from mechanism design and auction theory that fail to extend the single-unit/single-dimensional context to the multi-unit/multi-dimensional one, e.g., Armstrong (1996), Perry and Reny (1999), and Levin (2004). For a benchmark of an auction game I follow the model with symmetric risk-neutral bidders who have independent-private values and where the payment is a function of bids alone as suggested by McAfee and McMillan (1987). The only additional assumptions are that the seller offers more than one unit for sale and the bidders demand two units that I call “initial” and “subsequent.” This model has been analyzed in Engelbrecht-Wiggans and Kahn (1998). I focus on the difference between the bidderʼs true value and the submitted bid which is called “bid shading” or “demand reduction” in the literature. In a uniform-price auction with no reservation price, a different shading in strategies on initial and subsequent units is present and prevents the seller from reaching a Pareto-efficient distribution of units. I show that when the seller sets some specific (optimal) reservation price, the difference in shading on the initial and subsequent unit decreases, which can prevent some inefficient allocations of units and, moreover, the seller gains higher revenue. For illustration, imagine two bidders in an auction with 2 units for sale with zero reservation price. Each bidder has two values and submits two bids. I denote the values of the first bidder v1v1, v2v2, the values of the second bidder as View the MathML sourcev1′, View the MathML sourcev2′ and the bids of the first bidder as b1b1, b2b2 and of the second bidder as View the MathML sourceb1′, View the MathML sourceb2′. If the values are such that View the MathML sourcev1′>v2′>v1>v2, then it is efficient if the first bidder wins both units. But in many cases equilibrium strategic behavior forces the bidders to submit bids with the ordering View the MathML sourceb1′>b1>b2′>b2, and the seller does not allocate the 2 units efficiently. When the seller increases the reservation price above v1v1, the second bidder does not submit a bid above the reservation price, and the first bidder wins both units, which is an efficient outcome.2 At the same time revenue typically increases. This reasoning is valid for the multi-unit uniform-price and to some extent for other multi-unit auctions if View the MathML sourceb1>b2′ and View the MathML sourcev1<v2′. On the other hand, setting the reservation price too high introduces inefficiency when the supply is greater than the number of submitted bids (e.g., View the MathML sourcev1′>R>v2′>v1>v2). In summary, the seller faces a trade off between these two sources of inefficiency and the total effect is ambiguous. In this paper I show that the expected efficiency typically increases when the seller increases the reservation price above 0 in the uniform-price auction. In addition, the results of this paper also contribute to the literature on efficient multi-unit auction design. Krishna (2002, Proposition 13.3) argues that equilibrium strategies cannot be efficient if a shading difference across units is present.3 The seller who uses submitted bid ordering to allocate units cannot attain efficient allocations when bidders use different shading across initial and subsequent units. This paper, additionally, supports Krishnaʼs proposition that any means that decrease shading differences can improve efficiency of the final allocation. The reservation price is an example of such a mean in a multi-unit uniform-price auction when the number of bidders is small. The paper is organized as follows. At first I discuss the relationship of this paper to other studies. Then, in the next section, I develop a model of a uniform-price auction for n bidders, k units of supply, and a reservation price R. I also derive expressions for the expected efficiency measures. In the rest of the paper, I disentangle two sources of inefficiency, show the general conditions when the optimal reservation price that maximizes efficiency is positive, and demonstrate this main contribution of the paper with a simple example. Finally, I briefly discuss generalizations and conclude the paper.