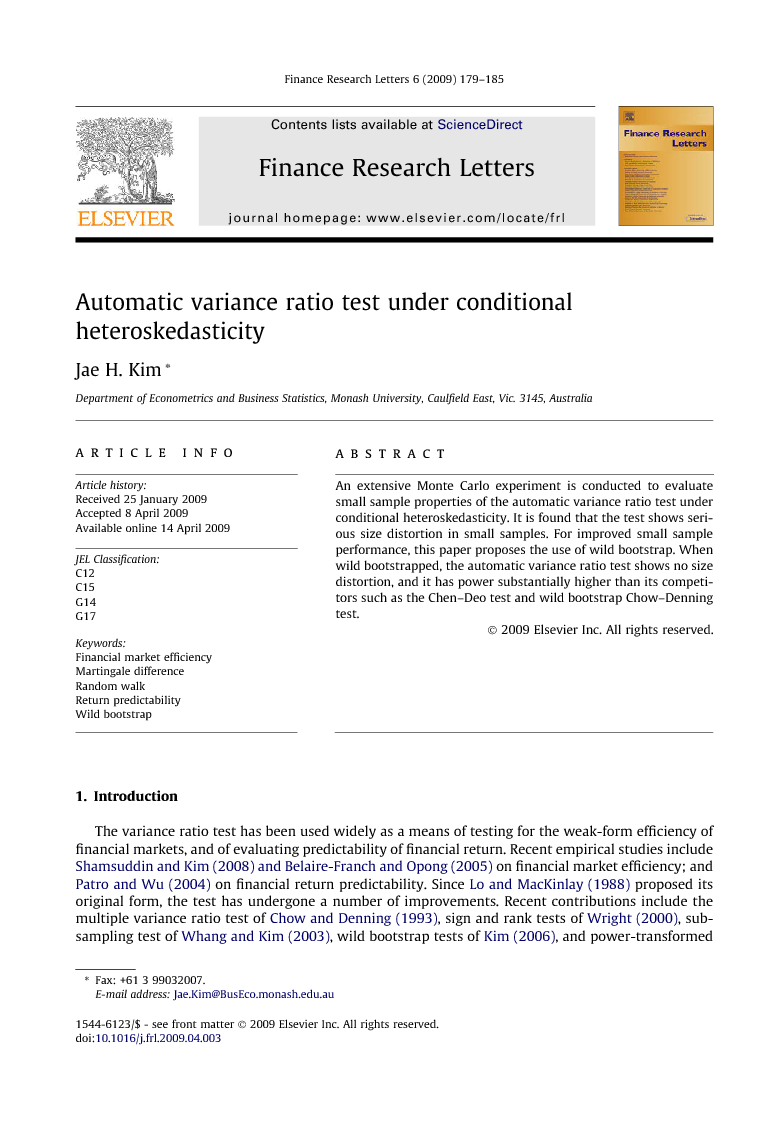 The variance ratio test has been used widely as a means of testing for the weak-form efficiency of financial markets, and of evaluating predictability of financial return. Recent empirical studies include Shamsuddin and Kim, 2008 and Belaire-Franch and Opong, 2005 on financial market efficiency; and Patro and Wu (2004) on financial return predictability. Since Lo and MacKinlay (1988) proposed its original form, the test has undergone a number of improvements. Recent contributions include the multiple variance ratio test of Chow and Denning (1993), sign and rank tests of Wright (2000), subsampling test of Whang and Kim (2003), wild bootstrap tests of Kim (2006), and power-transformed test of Chen and Deo (2006). A survey of recent developments of the variance ratio tests is given by Charles and Darne (2009). The test is based on the property that, if an asset return is purely random, the variance of k-period return is k times the variance of the one-period return. Hence, the variance ratio VR(k), defined as the ratio of 1/k times the variance of k-period return to that of one-period return, should be equal to one for all k. To implement the test, a choice of (holding periods) k values should be made; e.g., a popular choice for daily return is (2, 5, 10, 20, 40); and (2, 4, 8, 16, 32) for weekly returns. However, these choices are arbitrary and made with little statistical justifications. In response to this, Choi (1999) proposed an automatic variance ratio (AVR) test, in which the optimal value of k is determined using a completely data-dependent procedure. However, Choi (1999) reported small sample properties of the AVR test when the return follows an iid process, while its properties under conditional heteroskedasticity are completely unknown. The purpose of this paper is to evaluate the size and power properties of the AVR test when the return is conditionally heteroskedastic. It is found that the AVR test should be wild bootstrapped for correct size in small samples. The power of the wild bootstrap AVR test is found to be higher than its competitors in small samples, such as the wild bootstrap version of the Chow–Denning test ( Kim, 2006) and the power-transformed joint test of Chen and Deo (2006). The next section presents the AVR test and its wild bootstrap version. Section 3 presents alternative variance ratio tests, and Section 4 reports the Monte Carlo results.

This section evaluates the size and power properties of the AVR test and its wild bootstrap version (AVR*), and compares them with those of the alternative tests discussed in Section 3. The simulation design follows Kim (2006). The sample sizes (T) considered are 100, 500 and 1000. For the MV∗ and QP tests, we set (k1, k2, k3) = (2, 5, 10). Table 1 reports the models for asset return Yt simulated. A GARCH (Model 1) and a stochastic volatility (SV, Model 2) models are used to evaluate the size. They are generated using N(0, 1) and Student-t distribution with three degrees of freedom. Models 1 and 2 are also used as error terms for an AR(1) model (Model 3) and a long memory model (Model 4), that are used to calculate the power. The level of significance α is set to 5%. For wild bootstrapping, we use N(0, 1) for ηt following Kim (2006), although other two-point distributions may be used instead (see, for example, Mammen, 1993). The number of bootstrap iterations B is set to 500, and the number of Monte Carlo trials is set to 1000. That is, we generate 1000 different sets of asset return Yt (t = 1, … , T), in order to evaluate the properties of AVR, AVR*, MV* and QP tests in repeated sampling. For each Yt (t = 1, … , T), the wild bootstrap tests (AVR* and MV*) are conducted by repeatedly generating View the MathML sourceYt* from Yt (t = 1, … , T) 500 times. 2