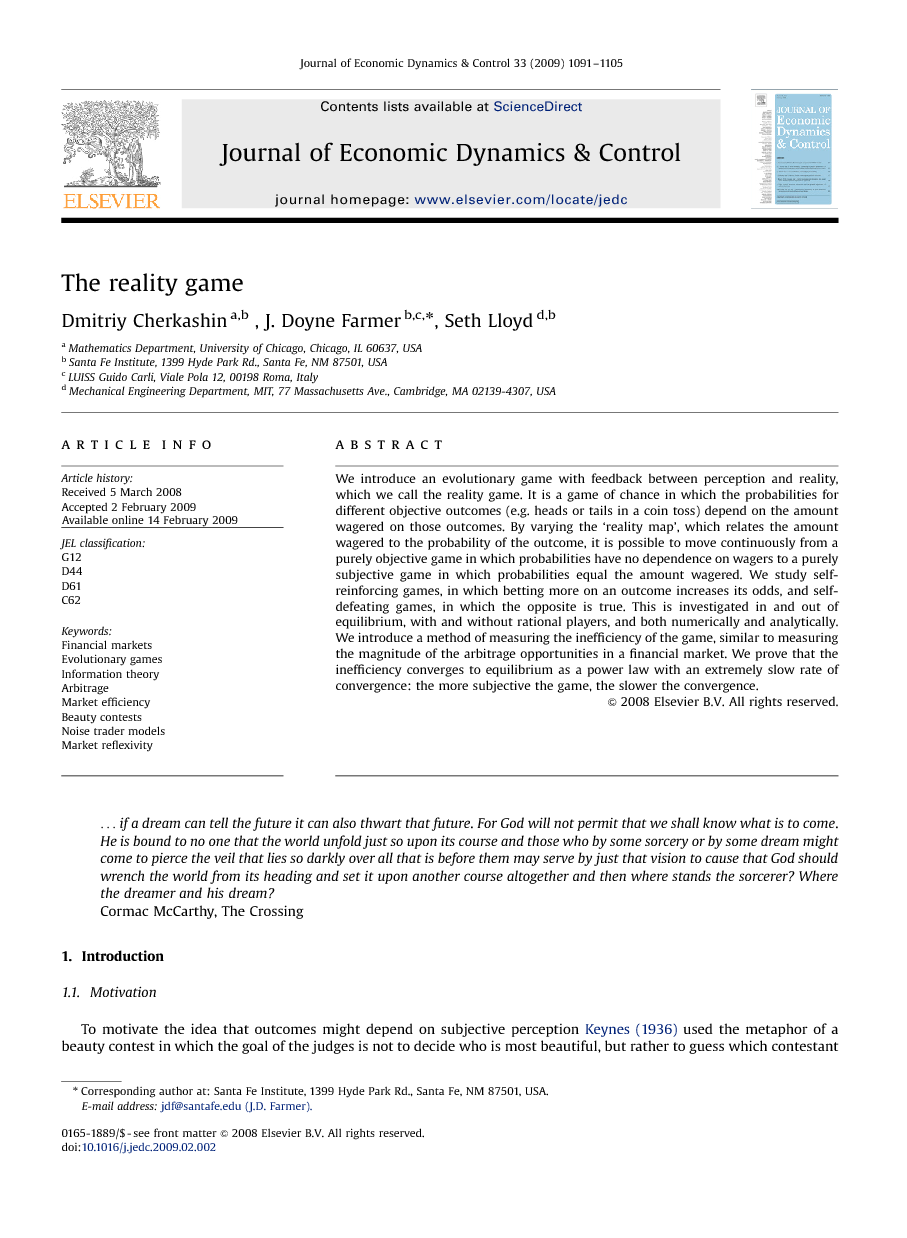 We introduce an evolutionary game with feedback between perception and reality, which we call the reality game. It is a game of chance in which the probabilities for different objective outcomes (e.g. heads or tails in a coin toss) depend on the amount wagered on those outcomes. By varying the ‘reality map’, which relates the amount wagered to the probability of the outcome, it is possible to move continuously from a purely objective game in which probabilities have no dependence on wagers to a purely subjective game in which probabilities equal the amount wagered. We study self-reinforcing games, in which betting more on an outcome increases its odds, and self-defeating games, in which the opposite is true. This is investigated in and out of equilibrium, with and without rational players, and both numerically and analytically. We introduce a method of measuring the inefficiency of the game, similar to measuring the magnitude of the arbitrage opportunities in a financial market. We prove that the inefficiency converges to equilibrium as a power law with an extremely slow rate of convergence: the more subjective the game, the slower the convergence.

To motivate the idea that outcomes might depend on subjective perception Keynes (1936) used the metaphor of a beauty contest in which the goal of the judges is not to decide who is most beautiful, but rather to guess which contestant will receive the most votes from the other judges. Economic problems typically have both purely objective components, e.g. how much revenue a company creates, as well as subjective components, e.g. how much revenue investors collectively think it will create. The two are inextricably linked. For example, if investors think a company will succeed they will invest more money, which may allow the company to increase its revenue. In general, subjective perceptions affect investment decisions, which affect objective outcomes, which in turn affect subjective perceptions. Keynes's model only deals with the purely subjective elements of this problem, in the sense that the choices of the judges do not change how beautiful the contestants are. We are interested in developing a simple conceptual model for the more general case where subjective perception affects objective outcomes. In our game the opinions of the judges do affect the beauty of the contestants. The importance of this in financial markets has been stressed by Soros (1987), who calls this ‘market reflexivity’. Our model takes the form of a simple game of chance in which the probability of outcomes can depend on the amount bet on those outcomes. This dependence is controlled by the choice of a ‘reality map’ that mediates between subjective perception and objective outcome. The form of the reality map can be tuned to move continuously from purely objective to purely subjective games, and to incorporate both positive and negative feedback. 1 Consider a probabilistic event, such as a coin toss or the outcome of a horse race. Now suppose that the odds of the outcomes of the event depend on the amount wagered on them. In the case of a coin toss, this means that the probability of heads is a function (the reality map) of the amount bet on heads. For a purely objective event, such as the toss of a fair coin, the reality map is simple: the probability of heads is View the MathML source12, independent of the amount bet on it, and thus the reality map is constant. But many situations depend on subjective elements. In the case of a horse race, for instance, a jockey riding a strongly favored horse may make more money if he secretly bets on the second most favored horse and then intentionally loses the race. This is an example of a self-defeating reality map: if jockeys misbehave, then as the horse becomes more popular, the objective probability that it will win decreases. Alternatively, in the economic setting we discussed above, if people like growth strategies then they invest in companies whose prices are going up, which in turn drives prices further up. This is an example of a self-reinforcing reality map. Our model makes it possible to qualitatively study these diverse cases within the context of game theory in a simple and consistent setting. In this paper we study a game of chance under a variety of different reality maps, ranging from purely objective to purely subjective, and including both self-defeating and self-reinforcing cases. We study this as an evolutionary game in which players have fixed strategies. Through time there is a reallocation of wealth toward a single strategy. By introducing a rational player we can define the inefficiency of the game in a way that is similar to how one might define the inefficiency in a financial market based on the magnitude of the arbitrage opportunities. We show that the inefficiency converges to zero very slowly, and in particular, when the reality map is close to being subjective, it converges extremely slowly.