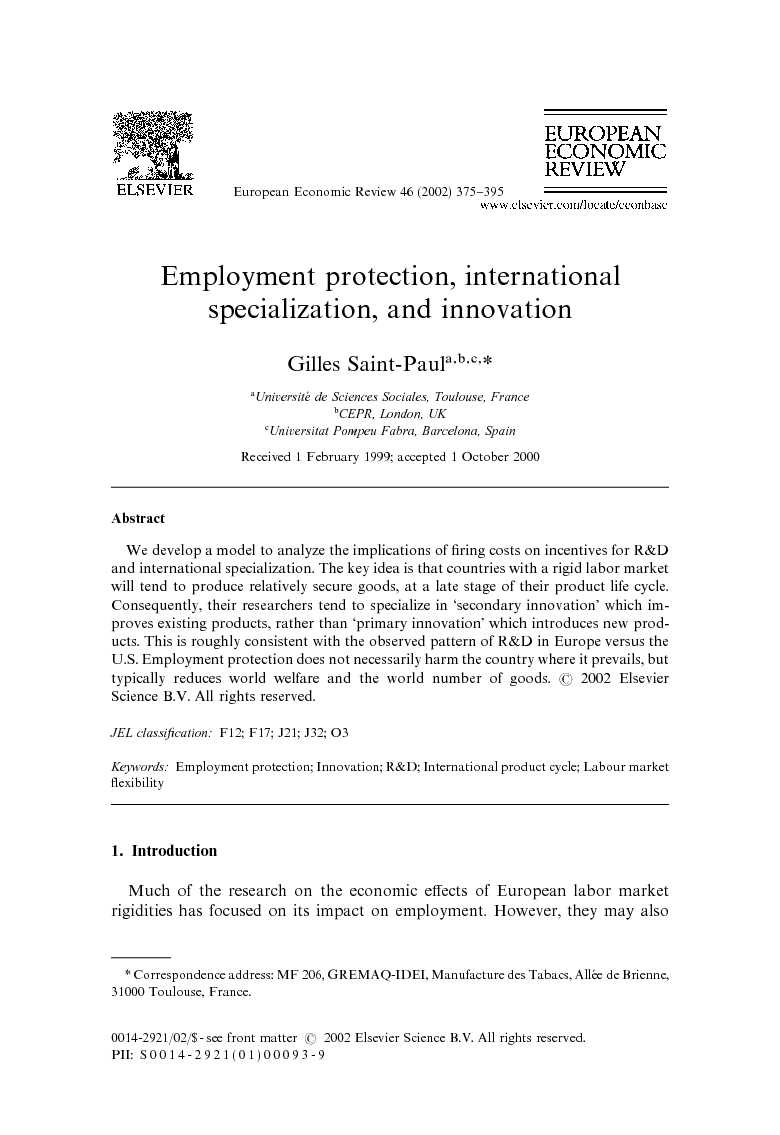 We develop a model to analyze the implications of firing costs on incentives for R&D and international specialization. The key idea is that countries with a rigid labor market will tend to produce relatively secure goods, at a late stage of their product life cycle. Consequently, their researchers tend to specialize in ‘secondary innovation’ which improves existing products, rather than ‘primary innovation’ which introduces new products. This is roughly consistent with the observed pattern of R&D in Europe versus the U.S. Employment protection does not necessarily harm the country where it prevails, but typically reduces world welfare and the world number of goods.

Much of the research on the economic effects of European labor market rigidities has focused on its impact on employment. However, they may also have an impact on other variables, such as long-run productivity, which may have greater consequences in terms of welfare. In Saint-Paul (1997), I have shown that employment protection legislation distorts the pattern of international specialization in favor of low-risk, mature goods. In the present paper, I analyze the implications of such a specialization pattern for the structure of innovation. We distinguish between ‘primary innovation’, which is the introduction of a new good, and ‘secondary innovation’, which is a cost reduction in an existing good. We also assume a ‘home bias’ in that it is cheaper to produce a good in the country where the innovation has taken place. The main result is that a high-firing cost economy will tend to specialize in ‘secondary innovation’, i.e. in improving existing products rather than creating new ones. That Europe tends to innovate more in established products than in new ones is evident from the data. For example, in 1993 the US accounted for 54% of world patents in biotechnology, 51% in computers, and 32% in communication, versus 13%, 14% and 13%, respectively, for France plus Germany. By contrast, these two countries accounted for 25% of world patents in instruments, 25% in construction, and 52% in transportation, versus 6%, 5% and 3% for the US.1 A paradigmatic illustration of a mature, ‘medium tech’, stable good in which Europe as a comparative advantage is the automobile tire industry, where Michelin of France is a world leader. Interestingly, Michelin is also a dynamic innovator.2 But its innovations are always improvements on an existing, well-defined good whose demand is clearly established and fairly stable. This is to be compared with the proliferation of new goods and risky undertakings that come out of the Silicon Valley. This paper therefore sheds light on why Europe appears as less ‘high-tech’ than the United States.3 It does not necessarily follow, however, that such a pattern of specialization and innovation is necessarily harming Europe relative to the United States. To the extent that secondary innovation improves efficiency, it may well be a good idea to specialize in that activity and leave the more risky primary innovation to another country. What we are able to show, however, is that if secondary innovation does not reduce costs by too much, an increase in employment protection in one country reduces welfare and the total number of goods the integrated world economy. But the distribution of losses is unclear: the high-firing cost country may lose less than the flexible one, and may even gain in absolute terms, at least in principle. That is, one country's specialization in secondary imitation exerts negative externalities on the other country by reducing the total number of goods available to world consumers. The paper is organized as follows. Section 2 sets up our basic model of trade, rigidity and innovation. Section 3 derives the main results concerning the impact of firing costs on the international structure of innovation. Section 4 relates our findings to the literature on labor market institutions and economic performance. Section 5 contains concluding comments.

In this paper, we have shown that firing costs distort the pattern of specialization and innovation in favor of mature goods. The main result is that the pattern of comparative advantage induced by employment protection tends to bias the research effort to secondary innovations that improve on existing products rather than take the risk of creating new ones. In an open economy, the high-firing cost country will imitate more than the low-firing cost country, and more than if it were closed. It may even fully specialize in secondary innovation, which cannot happen if it were closed. Invention is more sensitive to firing costs in the open than in the closed economy. Firing costs reduce the total number of goods available in the world economy and reduce welfare if secondary innovation does not enhance efficiency by too much. The model could be extended in various directions. While implications for growth are ignored in this particular setting, one could reintroduce growth by assuming externalities of the number of products on the cost of R&D. This could engineer perpetual growth, and the negative impact of labor market rigidities on the total number of product would then potentially show up as a negative impact on the economy's long run growth rate, as in Boone (2000).24 This would potentially reinforce the results.25 But, as we have argued in the previous section, there are other sources of growth which may lead to different implications. The model may also help to understand why European countries are more prone of industrial policy than the U.S.: because their rigid labor markets introduce a bias against high-tech goods in their specialization pattern, they are more tempted to offset this bias by subsidies and other protection measures.