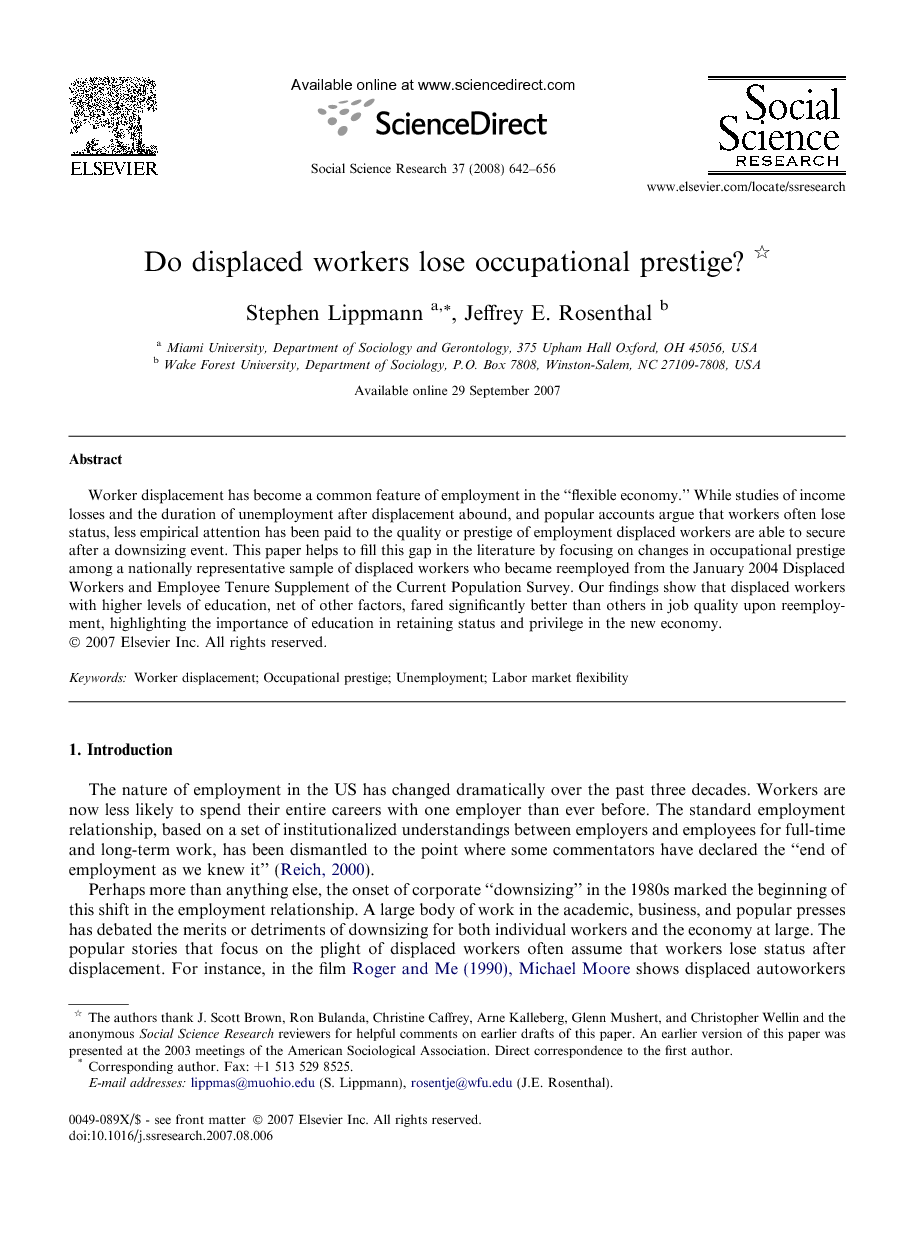 Worker displacement has become a common feature of employment in the “flexible economy.” While studies of income losses and the duration of unemployment after displacement abound, and popular accounts argue that workers often lose status, less empirical attention has been paid to the quality or prestige of employment displaced workers are able to secure after a downsizing event. This paper helps to fill this gap in the literature by focusing on changes in occupational prestige among a nationally representative sample of displaced workers who became reemployed from the January 2004 Displaced Workers and Employee Tenure Supplement of the Current Population Survey. Our findings show that displaced workers with higher levels of education, net of other factors, fared significantly better than others in job quality upon reemployment, highlighting the importance of education in retaining status and privilege in the new economy.

We posed two questions at the outset of this paper: are displaced workers losing occupational prestige when they become reemployed, and which factors affect changes in occupational prestige between the jobs displaced workers held before and after the displacement spell? Clearly, there is not a simple answer to the first question. While on the whole, workers do lose prestige as a result of displacement, some workers lose more than others. Our answers to the second question point to a clear and striking pattern in the contemporary labor market. The significant effects of education and occupation on changes in occupational prestige lend support to the notion that the increasingly common phenomenon of involuntary displacement has disparate consequences for different workers. Those with high levels of education do better upon reemployment than those with less education. Many features of the “old” employment model, such as internal labor markets rewarded workers for longevity and loyalty and buffered them from labor market competition and market-based returns to education. As the employment relationship changes, however, and institutions such as ILMs are replaced with new, more flexible ones, education continues to be an important asset in the labor market. While they cannot speak definitively on the subject, our results do lend support to the idea that traditional conceptualizations of social class based on one’s location in the production process, whether to the means of production, in an authority hierarchy, or in an occupational group, need to take individual’s education into account. While professionals appear particularly effective at protecting their interests, another group of occupations with strong social closure—those in skilled blue-collar occupations—did not experience the same benefits in reemployment (also see Dudley, 1994). After testing for collinearity among industry, occupation, and union membership, we did not find evidence of any protective mechanisms for the skilled blue-collar workers or union members. We suspect that part of the problem for such workers is the result of industry and sectoral shifts in the changing economy that produce fewer opportunities for such workers to find comparable employment immediately (Uchitelle, 2006). Our findings highlight the importance of educational attainment and individual skills in determining one’s location in contemporary systems of stratification. Technology plays an overwhelmingly important role in the modern economy, and those with higher levels of education are more likely to have (or are perceived to have) the skills necessary for many jobs and are, therefore, in greater demand (Autor et al., 2003). Skills, creativity, and adaptability have contributed to the growing flexibility in the labor market, and have, according to many, replaced class as the new dividing line between the haves and have-nots (Kalleberg et al., 2000, Florida, 2002 and Barley and Kunda, 2004). As firms grow and shrink in rapid response to market and technological changes, workers must continually navigate the flexible labor market to secure employment. Those with advanced education and developed skill sets are better prepared to compete in the new labor market (Levy and Murnane, 2004). In addition, as returns to education are high in the “new” economy, labor market rewards, including occupational prestige, are being distributed in a polarized manner, with highly-skilled workers able to reap benefits, and those with little formal training or outdated skills relegated to poor quality jobs which offer few rewards and little security. Others argue that the importance of education in the new economy is not because of the human capital it confers upon those who have it, but because of the increasing importance of symbolic credentials. While our analysis cannot determine precisely which educational mechanism is at work, we believe that the abstract and uncertain nature of “skills” and job requirements in an increasingly service-based economy make education a symbolically valuable resource that is used as a proxy for general skills that are important in many service occupations and industries (Murphy, 1988). Future research on this topic must look more closely at how education and work structures interact with race and gender to create new kinds of inequality in the new economy. Some important questions surrounding these issues remain unanswered by our findings and should be addressed by future research: are the returns to education that are so important to gaining quality employment “blind,” or are groups traditionally at a disadvantage in educational and labor markets hit doubly hard as a result of the increasing importance of education? Will improving education and educational attainment for disadvantages groups help them to fare better in the new economy? Do the increasing returns to education found here and in other work indicate that the salience of class boundaries are declining, or are the bases of class changing in post-industrial economies? Labor market and employment restructuring has been widespread over the past two decades. One of the most important consequences of these changes is increasing employment insecurity. As insecurity resulting from displacement becomes a common feature of working in the 21st century, research must continue to address the role it plays in career development and social mobility. While more research is needed to fully understand the role that displacement plays in work and employment, this paper provides an important step in our understanding of labor market stratification in the new and flexible economy.