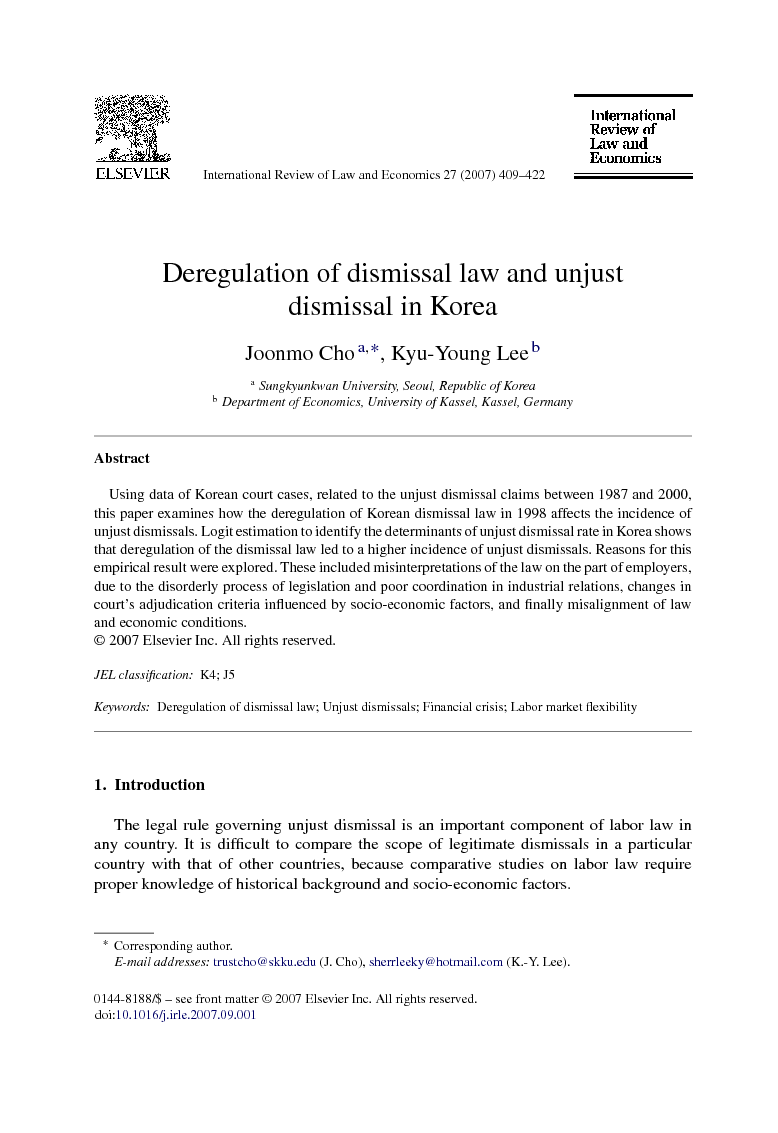 The legal rule governing unjust dismissal is an important component of labor law in any country. It is difficult to compare the scope of legitimate dismissals in a particular country with that of other countries, because comparative studies on labor law require proper knowledge of historical background and socio-economic factors. The level of employment protection in Korea had been very strong prior to the 1990s. The Korean Labor Standards Act (hereafter LSA) had limited the power of employers to break employment contracts at will, and has stipulated that an employer can dismiss an employee only with justifiable reason. In 1997, Korea experienced a financial crisis that necessitated a “bail out” by the IMF. Due to pressure from the IMF, the new dismissal law was legislated in 20 February 1998. The adoption of this new law intended to relax pre-existing limitations on employers’ use of discretion in relation to employment adjustment (IMF, 2004). This legislative change certainly allowed for increased flexibility in the Korean labor market, which could in some instances “even reduce job security.” Employers fully supported this trend in deregulation, argued that greater freedom to making employment adjustments creates more jobs, and thus eventually benefits employees.1 As expected, labor unions strenuously opposed this trend, and argued that due to this legal transition, unjust dismissals would become more prevalent and the labor market more unstable. Regarding the regulation or deregulation effects of employment protection, there are two-key OECD studies. In the first study (OECD, 1996), rank correlations are provided between job turnover, unemployment inflow/outflows and long-term unemployment. They are not statistically significant except in the case of long-term unemployment and unemployment inflows. The second study (OECD, 1999) confirmed the results of the first study with a visible and significant improvement for the overall measure of employment protection. Furthermore, Addison and Teixeira (2003) summarized the previous literatures on the effect of employment protection on the labor market. They suggested that the employment protection seemed to work in predicted manners to reduce both flows into and out of employment and to increase jobless duration. This study empirically analyzes how the deregulation of dismissal law in 1998 has affected employers’ unjust dismissals, using dismissal court cases since 1987. The ceteris paribus analysis controlling personal, institutional and socio-economic factors assesses how this legal change affected the incidence of employers’ unjust dismissals. Various aspects in legislating dismissal law cause the trend in increased unjust dismissals. First, the disorderly process of law-making may result in design failure, which is to be seen in vague standards that fail to establish clearly the scope of legitimate dismissals (Büchtemann & Walwei, 1996) and thereby give rise to employers’ erroneous interpretations. This may cause a trend of increased unjust dismissals. Second, the court itself may change the substance of applicable law when considering the societal and economic environment in fixing the terms of the new dismissal law. This may cause a new trend of unjust dismissals. Third, the misfit between dismissal law and economic conditions could be seen as a reason for increase in the rate of unjust dismissals. The new dismissal law would have enhanced flexibility to a certain degree in a particular historical moment like the 1998 financial crisis. However, it may cease to do so when economic circumstances change. For instance, more intensified global competition after the financial crisis may induce employers to seek for a higher level of flexibility, causing the trend of rise in unjust dismissals. Section 2 defines the economic dismissal in LSA terms, and explains the historical change in Korean dismissal law. Section 3 demonstrates the rising trend in Korean unjust dismissal cases and logit estimation, which identifies factors causing such trends. Section 4 interprets empirical results obtained in Section 3. Section 5 concludes this paper.

Since 1998, Korean dismissal law has been amended to relax limitations on employers’ discretion in relation to employment adjustment. This in turn has allowed greater flexibility in the labor market. However, the disorderly and ill coordinated manner in which this change was introduced, may in fact have led to higher incidence of unjust dismissals. Here, the total population of unjust dismissal cases has been scrutinized since 1987, with the purpose of analyzing how the deregulation of dismissal law in Korea has affected employers’ unjust dismissals. Over the relevant period of time, changes in the plaintiff win rate have been investigated, to assess changes in the incidence of employers’ unjust dismissals. Explanations for this apparent increased incidence of unjust dismissals were also explored. These included misinterpretations of the law on the part of employers due to the disorderly process of legislation and poor coordination in industrial relations, changes in court's adjudication criteria influenced by socio-economic factors, and finally misalignment of law and economic conditions. A tentative conclusion was drawn that the disorderly political process of legislating the dismissal laws led to employers misinterpreting the law to mean that they had greater leverage in dismissing workers. In fact, the disorderly liberalization of Korean dismissal laws may have amplified errors in the subjective evaluations of employers in the field. Poor coordination between the national-level bargaining and enterprise-level collective bargaining relations also appears to have aggravated the situation. Employers overestimating the effect of liberalization are more likely to dismiss their employees unjustly than are those in the other comparison group. To make matters worse, more intensified market competition due to the open market policy the Korean government has pursued since the financial crisis increased employers’ needs to rely on numerical flexibility as a way of higher level corporate restructuring. The increasing misfit between dismissal law and economic conditions are then to be seen as rising unjust dismissal. The insights in this paper can contribute to the provision of guidelines for countries that seek to evolve policies to increase labor market flexibility. The legal change should be consistently made through more orderly and formal collective bargaining relations. Back-up institutional framework may be necessary to promote faithful negotiation between employers and employees and to make the legislation compatible with collective bargaining relations. Coordination between central level-bargaining and enterprise-level collective bargaining relations is important. Central level union and management must also have actively mediated and coordinated their interests in the field. Procedural requirements appropriate to the peculiar circumstances of each enterprise may be encouraged to be explicitly stated in each agreement. Stipulation containing abstract expression should be minimized, and the scope of managerial needs in dismissal law should be defined more transparently.