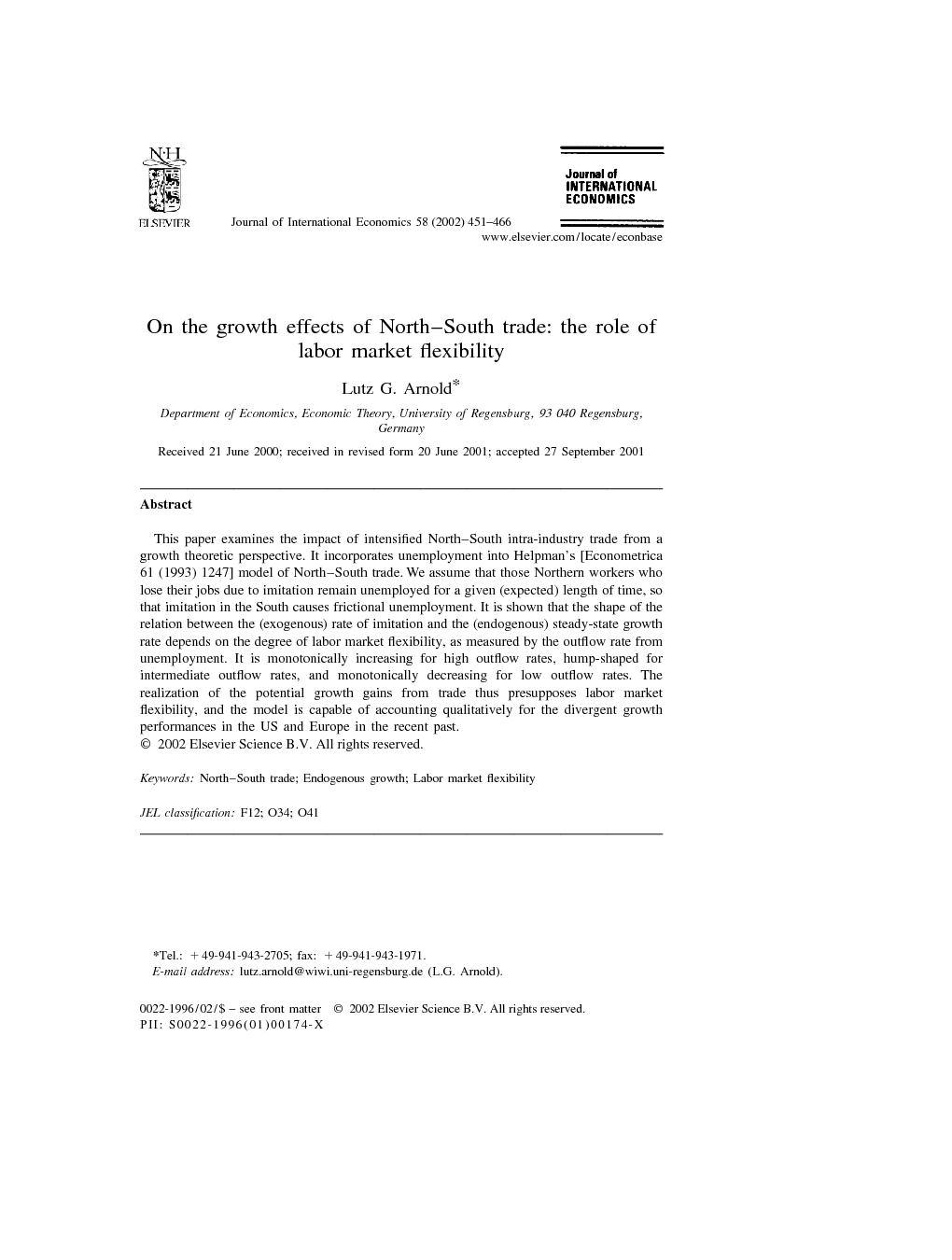 This paper examines the impact of intensified North–South intra-industry trade from a growth theoretic perspective. It incorporates unemployment into Helpman’s [Econometrica 61 (1993) 1247] model of North–South trade. We assume that those Northern workers who lose their jobs due to imitation remain unemployed for a given (expected) length of time, so that imitation in the South causes frictional unemployment. It is shown that the shape of the relation between the (exogenous) rate of imitation and the (endogenous) steady-state growth rate depends on the degree of labor market flexibility, as measured by the outflow rate from unemployment. It is monotonically increasing for high outflow rates, hump-shaped for intermediate outflow rates, and monotonically decreasing for low outflow rates. The realization of the potential growth gains from trade thus presupposes labor market flexibility, and the model is capable of accounting qualitatively for the divergent growth performances in the US and Europe in the recent past.

Recently, there has been considerable interest, both academic and popular, in the question of whether intensified intra-industry trade with low-wage countries (the ‘South’) harms industrial nations (the ‘North’). The formal academic literature which addresses this question is almost exclusively based on the static Heckscher–Ohlin theory of international trade (see, e.g., Wood, 1994 and Krugman, 1995, and the classic paper by Brecher, 1974). The main theoretical insight obtained from this strand of the literature is that intensified trade with the South forces the North to choose between rising wage inequality and increasing unemployment, the former arising when labor markets are flexible (the ‘American model’) and the latter when labor market rigidities prevent wages from diverging (the ‘European model’). Since the same effects result from technical progress, the empirical significance of intensified trade for the increases in American wage inequality and in European unemployment is unclear. While Wood (1994) argues that trade is the major culprit, Krugman (1995) holds the opposite position (also see Freeman, 1995). The main purpose of the present paper is to examine the impact of intensified North–South intraindustry trade from an explicitly dynamic, growth theoretic perspective with innovation, imitation, product life cycles, and unemployment spells. To this end, we incorporate unemployment into Helpman’s (1993) model of innovation, imitation, and intra-industry North–South trade: we assume that those Northern workers who lose their jobs when the production of the goods in the making of which they are employed moves to the South do not immediately find a new job, but remain unemployed for a given (expected) length of time, so that imitation in the South causes frictional unemployment. Helpman’s (1993) model is obtained as the special case where the length of unemployment spells is zero and, consequently, there is no frictional unemployment. Now suppose that trade intensifies in that the (exogenous) rate of imitation of Northern products increases. In Helpman’s (1993, p. 1260) full employment model, (endogenous) innovation in the North accelerates although product life cycles become shorter. This is because the South gains the ability to use its resources more efficiently, so that world income and the demand for innovative products rise. In our model with frictional unemployment, intensified competition from the low-wage region has another detrimental impact on growth: the Northern resource base diminishes because the shortening of the product life cycles causes additional frictional unemployment. The lower the outflow rate from unemployment, the stronger this effect. We demonstrate that Helpman’s (1993) result, the positive link between imitation and innovation, ceases to hold if the Northern labor market is inflexible. For intermediate values of the expected length of unemployment spells, the relation between imitation and innovation is hump-shaped; for high values of the expected length of unemployment spells, the rate of innovation is a monotonically decreasing function of the rate of imitation. Helpman (1993, fn. 19, p. 1261) remarks that in the context of North–South growth models, “the long-run negative [obviously, he means positive, L.A.] link between the rate of innovation and the rate of imitation is not robust” so that the “results are indicative of what may happen rather than definitive”. The aim of this paper is not to confirm the non-robustness of the relationship between the rate of innovation and the rate of imitation, but to demonstrate that the degree of labor market flexibility has a systematic impact on the shape of this function: the realization of the potential growth gains from trade presupposes a sufficiently high degree of labor market flexibility.1 Both the US’s and Europe’s exposure to competition from Southern manufacturers has increased sharply in recent years. For instance, imports from the Dynamic Asian Economies and China as a fraction of GDP have risen from 0.72% in 1982 to 2.03% in 1998 in the US and from 0.54 to 1.49% in the EU (OECD, 1999, Annex Table 64). Imports from other low-wage regions have developed similarly. Labor markets have been more flexible in the US than in the EU (see Nickell, 1997). In 1988, the average duration of unemployment was 3 months in the US as opposed to 10 months in the UK, 16 in Germany, 21 in France, 36 in Italy, and 105 in Spain (Layard et al., 1991, Table 5.1, p. 222). So our model predicts that Europe’s growth and employment performance should have been markedly worse than the US’s, as was in fact the case: over the interval 1982–1998, annual real GDP growth averaged 3.5% in the US and 2.3% in the EU (OECD, 1999, Annex Table 1). In the US, unemployment fell from 9.6% in 1982 to 4.5% in 1998, while it rose slightly from 9.5 to 10.1% in the EU. Section 2 introduces the model. The equations of motion are derived and the steady state is examined in Section 3. We also state a theorem that proves the local stability of the steady state. Section 4 is concerned with the impact of labor market flexibility on the growth effects of North–South trade. Some concluding remarks are made in Section 5.

This paper addresses the question of whether trade with low-wage countries is conducive to growth in industrialized countries by incorporating a very simple form of frictional unemployment into Helpman’s (1993) endogenous growth model with North–South trade. It is assumed that it takes time for Northern workers who lose their jobs due to imitation to leave the pool of unemployment. It is demonstrated that the presence of a positive link between innovation and imitation presupposes that the labor market is sufficiently flexible, in that the outflow rate from unemployment is sufficiently high. If, on the contrary, the outflow rate is low, the relation between the rate of innovation and the rate of imitation is hump-shaped or even monotonically decreasing. Whenever the growth rate falls, so does aggregate employment. These findings help explain why countries with flexible labor markets, such as the US, have experienced rapid growth in the recent past, while in many European countries with inflexible labor markets the process of globalization has been accompanied by sluggish output growth and high unemployment.