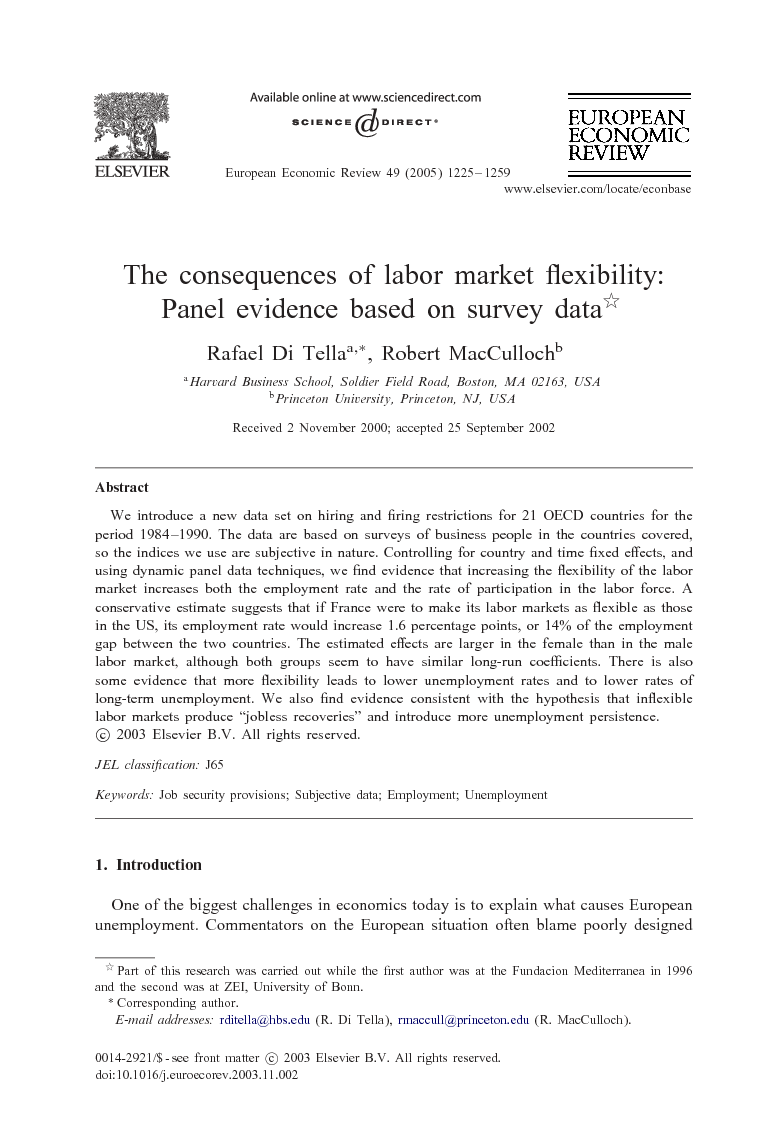 We introduce a new data set on hiring and firing restrictions for 21 OECD countries for the period 1984–1990. The data are based on surveys of business people in the countries covered, so the indices we use are subjective in nature. Controlling for country and time fixed effects, and using dynamic panel data techniques, we find evidence that increasing the flexibility of the labor market increases both the employment rate and the rate of participation in the labor force. A conservative estimate suggests that if France were to make its labor markets as flexible as those in the US, its employment rate would increase 1.6 percentage points, or 14% of the employment gap between the two countries. The estimated effects are larger in the female than in the male labor market, although both groups seem to have similar long-run coefficients. There is also some evidence that more flexibility leads to lower unemployment rates and to lower rates of long-term unemployment. We also find evidence consistent with the hypothesis that inflexible labor markets produce “jobless recoveries” and introduce more unemployment persistence.

One of the biggest challenges in economics today is to explain what causes unemployment. Economists who study European unemployment often point out that it must be labor market regulations. This view has been adopted by international institutions like the World Bank and the IMF, which now insist that countries make their labor markets more flexible when providing them with financial support. The evidence available to support this view consists of cross-sections, like that of Bertola (1990) with 10 countries, or the OECD (1994) with 21, and the panel constructed by Lazear (1990). Because the latter focuses on laws for two aspects of flexibility that change little over time, these data are almost like another cross-section. There is, perhaps, no experience more sobering to an economist than to review the evidence we have to support policy recommendations on labor market flexibility and to reflect on the social, economic and personal costs of unemployment. We introduce a new panel data set on labor market flexibility based on surveys of business people in 21 OECD countries during 1984–1990. One of the virtues of the data is that they originate from people who have to make their living out of roughly understanding how stringent job security provisions actually are in their countries. The use of a subjective index allows respondents to capture movements in very different kinds of regulations that affect the flexibility of labor markets, such as provisions on part time work, severance payments, interpretation (and enforcement) of what constitutes legal cause for termination and so on. These regulations imply very different costs to normal business operations and would be extremely difficult to document with hard data. There are, of course, limitations to the data we use. The index is more vague than what an economist would ideally like to use. By its nature, our flexibility index does not allow us to distinguish between the effect of the different regulations that are active. And although we present some time series/cross-section validation exercises, the fact must remain that data that are subjective in nature must be treated with care. However, we believe the relevance of the subject matter and the evidence available to the profession to be so out of balance that a willingness to experiment with survey data is justified. We follow Lazear (1990) and use a parsimonious, reduced form approach to study the effect of flexibility on labor market performance. Our main findings are: 1. Controlling for country and time fixed effects, and using dynamic panel data techniques developed by Arellano and Bond (1991), we find that countries with more flexible labor markets have higher employment rates and higher rates of participation in the labor force. The results on employment are inconsistent with Bentolila and Bertola (1990) and Bertola (1990) and are consistent with the predictions in Hopenhayn and Rogerson (1993). 2. These results are stronger in the female labor market, although the long-run effects are approximately similar across both male and female sub-groups. 3. A potential drawback of these data is their contamination by the stage of the business cycle. When the economy is in recession firms are more likely to be firing than hiring and so employment protection legislation may impose binding constraints on firms. If managers’ responses to our survey question were in fact in the direction of greater inflexibility at such times, even though the parameters of the system have not changed, then the interpretation of our results would be different. Consequently, we repeated all our regressions controlling for the state of the business cycle (the change in GDP). The results are unaffected. We also note that it we would be hard to explain some of our coefficients if the contamination of the flexibility data with the business cycle was the main factor driving our results. 4. The estimated employment effects seem to be large. A conservative estimate is as follows: if France were to increase the flexibility of its labor markets to US levels, the employment rate would increase by 1.6 percentage points, almost 14% of the actual difference in employment rates between the two countries. In order to estimate the effect of flexibility on French GDP per capita, we note that this increase in flexibility would lead to a 2.8% increase in French total employment. Of course, this says nothing about the convenience of such a reform. For that we would need information on the benefits (in terms of employment security, wages and so on) of flexibility, a fact sometimes forgotten in policy debates. 5. The paper only finds some evidence that countries with more flexible labor markets have lower unemployment rates and a lower proportion of long term unemployed. The problem of the endogeneity of labor market institutions is addressed but still must remain an open issue. 6. In spite of some inconsistencies, the results on inflows and vacancies are interesting. Controlling for country and year fixed effects, we do not find evidence of positive effects of flexibility on inflows. We do however find evidence that more flexibility is associated with lower rates of unfilled vacancies and that there are more vacancies in a recovery that occurs in a country with high flexibility. 7. Lastly, we explore some alternative hypotheses related to flexibility that have been suggested in the literature. First, we examine the jobless recovery hypothesis. We find evidence that Okun's law is steeper in countries with very flexible labor markets (as suggested in Bertola, 1990). We also find evidence consistent with a second hypothesis tested by Bertola and suggested by Blanchard and Summers (1986) and Lindbeck and Snower (1989): that the dynamic structure of unemployment regressions is affected by flexibility. Controlling for country and time fixed effects, we find that unemployment is less persistent in countries with more flexible labor markets.