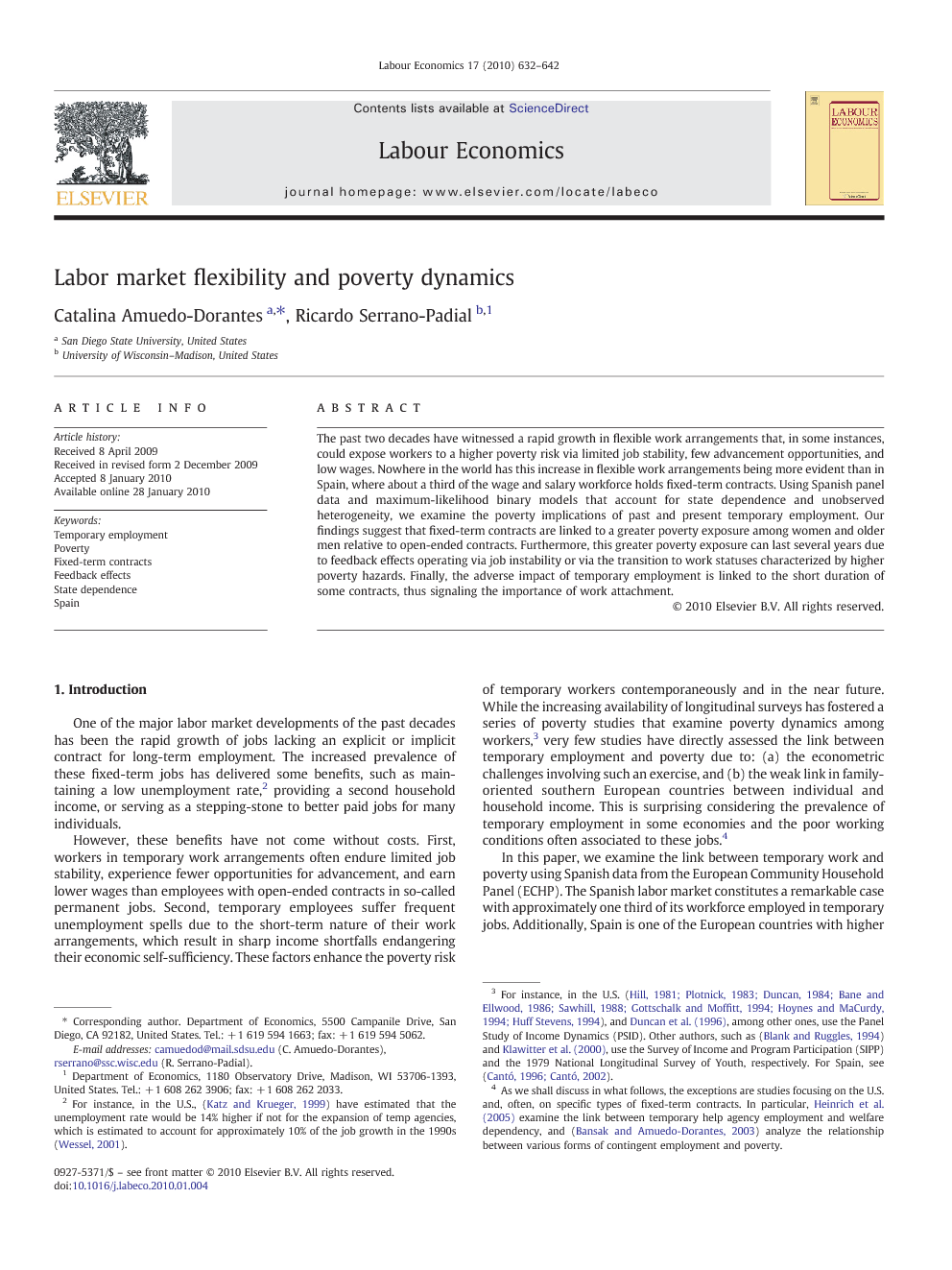 The past two decades have witnessed a rapid growth in flexible work arrangements that, in some instances, could expose workers to a higher poverty risk via limited job stability, few advancement opportunities, and low wages. Nowhere in the world has this increase in flexible work arrangements being more evident than in Spain, where about a third of the wage and salary workforce holds fixed-term contracts. Using Spanish panel data and maximum-likelihood binary models that account for state dependence and unobserved heterogeneity, we examine the poverty implications of past and present temporary employment. Our findings suggest that fixed-term contracts are linked to a greater poverty exposure among women and older men relative to open-ended contracts. Furthermore, this greater poverty exposure can last several years due to feedback effects operating via job instability or via the transition to work statuses characterized by higher poverty hazards. Finally, the adverse impact of temporary employment is linked to the short duration of some contracts, thus signaling the importance of work attachment.

One of the major labor market developments of the past decades has been the rapid growth of jobs lacking an explicit or implicit contract for long-term employment. The increased prevalence of these fixed-term jobs has delivered some benefits, such as maintaining a low unemployment rate,2 providing a second household income, or serving as a stepping-stone to better paid jobs for many individuals. However, these benefits have not come without costs. First, workers in temporary work arrangements often endure limited job stability, experience fewer opportunities for advancement, and earn lower wages than employees with open-ended contracts in so-called permanent jobs. Second, temporary employees suffer frequent unemployment spells due to the short-term nature of their work arrangements, which result in sharp income shortfalls endangering their economic self-sufficiency. These factors enhance the poverty risk of temporary workers contemporaneously and in the near future. While the increasing availability of longitudinal surveys has fostered a series of poverty studies that examine poverty dynamics among workers,3 very few studies have directly assessed the link between temporary employment and poverty due to: (a) the econometric challenges involving such an exercise, and (b) the weak link in family-oriented southern European countries between individual and household income. This is surprising considering the prevalence of temporary employment in some economies and the poor working conditions often associated to these jobs.4 In this paper, we examine the link between temporary work and poverty using Spanish data from the European Community Household Panel (ECHP). The Spanish labor market constitutes a remarkable case with approximately one third of its workforce employed in temporary jobs. Additionally, Spain is one of the European countries with higher levels of low-wage employment5 and structural unemployment rates. Via frequent unemployment spells owing to the limited duration of their contracts, temporary workers are likely to endure a higher poverty risk. Using maximum-likelihood limited dependent variable models that account for state dependence, individual heterogeneity correlated with the regressors and feedback effects, we examine the link between past and present temporary work of varying duration and the likelihood of being poor. The distinction between contemporaneous and future links of temporary employment to poverty is important since policy implications may differ depending on whether the welfare effects associated to fixed-term contracts are long lasting. We also distinguish between the direct link between poverty and past temporary employment (i.e. controlling for present work status) and the indirect link between poverty and past temporary employment via feedback effects. In particular, we relax the unrealistic assumption of temporary employment being exogenous and, instead, allow for any indirect or feedback effects from past temporary employment on poverty operating via job instability or via the transition to work statuses characterized by higher poverty hazards. Finally, we investigate possible differences in the association between poverty and temporary employment by gender, age, and the duration of the fixed-term contract held by the employee. This analysis is of special interest given the diverse implications of short-term versus longer term temporary work depending on the employee's gender and age.6 In sum, this project provides insight into whether temporary employment strengthens or, rather, dampens temporary workers' economic opportunities contemporaneously and in the near future relative to permanent employment. When doing so, we account for the endogeneity of the current work status emerging: (a) via unobserved individual level heterogeneity contemporaneously, and (b) via feedback effects referred to past temporary work. Despite these controls, we cautiously interpret our results as evidence of a strong correlation or link between temporary work and poverty rather than as unequivocal evidence of a causal relationship between the two given that there may be additional sources of endogeneity.7 We find that temporary employment is linked to a higher contemporaneous poverty risk among women and older men relative to permanent employment. This link seems to be driven by the harmful impact of short lived fixed-term contracts, thus signaling the importance of work attachment. Additionally, past temporary employment adds to men's and women's poverty risk via significant feedback effects. As such, while lower salaries and worse working conditions endured by temporary workers may contribute to their contemporaneous poverty risk, it is the inherent lack of job stability endured by past temporary employees that seems to reinforce their future poverty risk. These findings underscore the value of longer lived work contracts and policies aimed at facilitating the transition from fixed-term to open-ended contracts in fighting poverty.

This paper examines the link between poverty and past and present temporary employment while accounting for state dependence and unobserved heterogeneity possibly correlated with the regressors. Our results first reveal that women, particularly older women, as well as older men holding temporary jobs are more likely to live in poverty than their permanent counterparts. Much of the contemporaneous negative impact of temporary employment is due to short-lived temporary work contracts, which appear more harmful than longer temporary contracts. Specifically, temporary work contracts lasting up to six months are linked to a 4 to 9 percentage point higher poverty exposure among all men and women relative to permanent work contracts. As a result, the predicted contemporaneous poverty rate of temporary workers reaches 13% among older males, 10% among younger women, and up to 16% among older women. The link between temporary employment and poverty is further emphasized among older men and younger women holding one-year contracts, who endure a 3 percentage point higher contemporaneous likelihood of life in poverty than their permanent counterparts. As such, the predicted contemporaneous poverty rates among temporary workers with one-year contracts reach 10% among older men and 6% among younger women. What may explain the observed differences by age and gender? The differential welfare impact of temporary employment among younger versus older male workers may be explained by the divergent usage of temporary employment by each group. In particular, younger men may use temporary work contracts as a stepping-stone, whereas their older counterparts may resort to temporary employment as a means to earn an additional income. Gender differences in the poverty implications of temporary work for younger women relative to younger men could be due to a variety of factors. These may range from gender discrimination in the labor market, to women's lesser involvement in unions and work councils, and/or to women's more interrupted career and labor force participation patterns. Alternatively, it is possible that a higher percentage of younger women use temporary employment to earn a secondary household income versus as a stepping-stone in their careers as it may be the case among younger men. Second, we find that temporary employment has a long lasting link to poverty via its feedback effects. The latter perpetuate poverty exposure via job instability and the transition to work statuses with higher poverty risks. Finally, we document a significant degree of state dependence for both men and women. In particular, poverty state dependence seems to last well beyond a one year period. For instance, being poor three years ago is linked to a 6 to 9 percentage point higher likelihood of life in poverty, reaching poverty rates of approximately 13% among all men, 12% among younger women, and 16% among older women. In sum, while unable to provide unequivocal evidence of a causal relationship between temporary work and poverty, our results endorse the existence of a solid link between temporary work and poverty among women and older men relative to permanent employment. Furthermore, the poverty risk appears to be long lasting via significant indirect or feedback effects. This link seems to be primarily driven by the harmful effect of short-lived fixed-term contracts, thus signaling the importance of work attachment. As such, from a policy-wise perspective, our findings underscore the value of longer lived work contracts and policies aimed at facilitating the transition from fixed-term to open-ended contracts in fighting poverty.