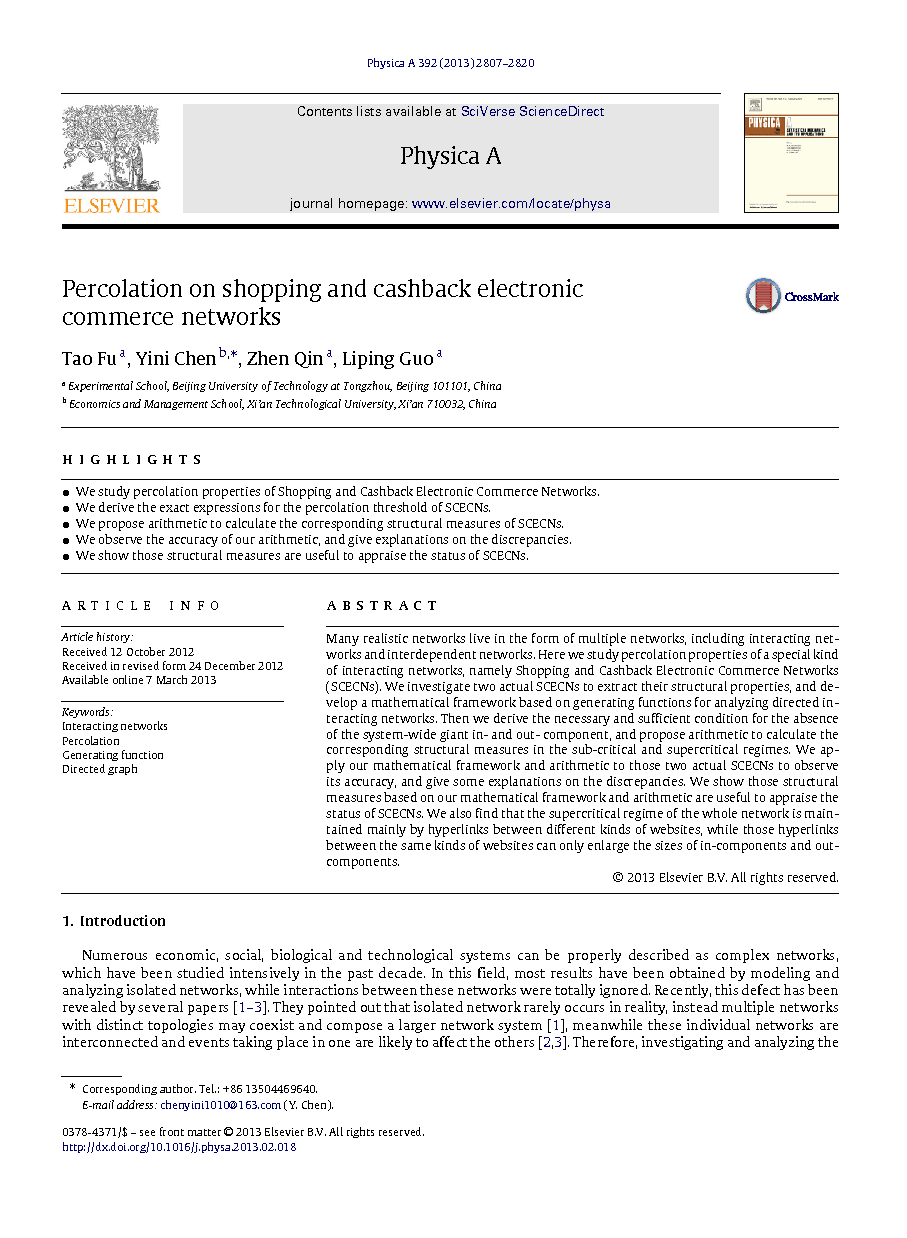 Many realistic networks live in the form of multiple networks, including interacting networks and interdependent networks. Here we study percolation properties of a special kind of interacting networks, namely Shopping and Cashback Electronic Commerce Networks (SCECNs). We investigate two actual SCECNs to extract their structural properties, and develop a mathematical framework based on generating functions for analyzing directed interacting networks. Then we derive the necessary and sufficient condition for the absence of the system-wide giant in- and out- component, and propose arithmetic to calculate the corresponding structural measures in the sub-critical and supercritical regimes. We apply our mathematical framework and arithmetic to those two actual SCECNs to observe its accuracy, and give some explanations on the discrepancies. We show those structural measures based on our mathematical framework and arithmetic are useful to appraise the status of SCECNs. We also find that the supercritical regime of the whole network is maintained mainly by hyperlinks between different kinds of websites, while those hyperlinks between the same kinds of websites can only enlarge the sizes of in-components and out-components.

Numerous economic, social, biological and technological systems can be properly described as complex networks, which have been studied intensively in the past decade. In this field, most results have been obtained by modeling and analyzing isolated networks, while interactions between these networks were totally ignored. Recently, this defect has been revealed by several papers [1], [2] and [3]. They pointed out that isolated network rarely occurs in reality, instead multiple networks with distinct topologies may coexist and compose a larger network system [1], meanwhile these individual networks are interconnected and events taking place in one are likely to affect the others [2] and [3]. Therefore, investigating and analyzing the connectivity properties and structural disciplines of complex networks under the circumstances of “networks of networks” is of academic value and practical meaning. So far, models focusing on “networks of networks” present some diversity, and several representatives are worthy to be scrutinized. Perhaps the most attractive and well known ones in this field are those talking about interdependent networks [2], [3], [4] and [5]. These models emphasized that modern networks are coupled in such a way that the failure of nodes in one network may lead to the failure of dependent nodes in other networks, which in turn causes further damage to the first network, leading to cascading failures as well as catastrophic consequences. Meanwhile, these models usually contain both dependency links which coin the relation between two nodes depending on each other, and connectivity links which denote that there exists only a communication channel between a pair of nodes [6]. In comparison with them, another influential model proposed by Leicht and D’Souza [1] concentrated on undirected interacting networks containing connectivity links only. They developed a mathematical framework based on generating functions for analyzing these interacting networks given the node connectivity within and between networks, and derived exact expressions for the percolation threshold. So their model also extended the application of generating functions into the area of “networks of networks”. Except models described above, there is a class of models seizing the fact that an agent may play different roles in different networks at the same time, thereby one node can appear in more than one network simultaneously, examples are Szell et al. [7], and Yagan et al. [8]. Their analyses always involved both every separate individual network and the conjoint network composed of all these individual networks aiming at finding and exploring some interesting properties belonging to the conjoint network. On one hand, these models provide us with more facilities to analyze and appraise realistic multiple networks system, and help give some reasonable development proposals. On the other hand, many realistic multiple networks systems have particular structural characteristics, which spur us to append more contents as well as constraint conditions to the primary model. This kind of work will improve the explanatory capability of the primary model, and make the theory of multiple networks system more close to reality. In this study, we mainly focus on percolation properties of a special kind of electronic commerce networks, namely Shopping and Cashback Electronic Commerce Networks (SCECNs). As usual, we define websites as nodes and hyperlinks as edges. Nodes of SCECNs can be divided into shopping websites and cashback websites, and each website does not depend on other websites so much. If one website breaks down, other websites will still work with an invalid hyperlink to that website. So SCECNs are interacting networks containing connectivity links only, and it is appropriate to choose the model created by Leicht and D’Souza [1] as the base model. Unfortunately, this model can deal with undirected graph only, but we have to take edge directions into consideration. Two kinds of components draw our special attention, including the set of nodes which can be reached from a given node as well as the set of nodes from which a given node can be reached. The former determines the amount of commodity information and cashback information received by online consumers through hyperlinks within SCECNs, while the latter has the connection with the profitability of both kinds of websites. Further, conditions for these components to become the giant ones are also worthy to be discussed. The rest of this paper is organized as follows. In Section 2, we give degree descriptions of two typical SCECNs, and extract structural properties of SCECNs from them. Based on these structural properties, in Section 3, we propose our mathematical framework for SCECNs, which is helpful to derive percolation conditions, and calculate the average sizes of those two kinds of components in the sub-critical regime, as well as the probabilities that a randomly chosen node is part of different giant components in the supercritical regime. In Section 4, we apply our arithmetic to those two SCECNs mentioned in Section 2 to observe its accuracy, and use analytical values to appraise the status of SCECN 1 as well as contributions of different kinds of hyperlinks. Finally, we present a discussion and conclusion in Section 5.

In Section 4, we applied our mathematical framework and arithmetic to those two realistic SCECNs to observe whether analytical results coincide with true values. Though system sizes of these SCECNs are not very large, we believe they are enough to show the validity as well as some discrepancies, and that is why we abandoned regenerating random networks with larger system sizes based on them. We have pointed out that discrepancies may arise from the inherent inaccuracy of generating a function framework, and beside this, SCECNs themselves may tend to have some circles. Think about shopping website A having outgoing and returning hyperlinks with shopping websites B and C at the same time, it is extremely possible for B and C to build the same relationship between them afterward, as it is propitious to form an alliance among A, B and C to compete together. This kind of alliance (circles) is not infrequent, and it should be taken with particular attention when we apply our framework and arithmetic. In this paper, we developed a mathematical framework based on generating functions for analyzing SCECNs, derived the necessary and sufficient condition for the absence of the system-wide giant in- and out- components and gave arithmetic to calculate the corresponding structural measures in the sub-critical and supercritical regimes. We apply our mathematical framework and arithmetic to those two actual SCECNs and show their validity. Those structural measures based on our mathematical framework and arithmetic such as probabilities that a randomly chosen shopping website or cashback website belongs to the giant in-component or out-component are useful to appraise the status of SCECNs and give some reasonable advices. By removing a proportion of specific kinds of hyperlinks and calculating analytical values of some structural measures, we also found the supercritical regime of the whole network is maintained mainly by hyperlinks between the shopping electronic commerce network and the cashback electronic commerce network, while those hyperlinks between the same kinds of websites can only enlarge the sizes of in-components and out-components. We mentioned in Section 2 that a shopping electronic commerce network can be further divided according to the main commodity range of websites, but in this paper only those composed of shopping websites with the same main commodity range have been discussed. Bringing in more than one of the shopping electronic commerce sub networks and studying their interaction with the cashback electronic commerce network is a meaningful thesis, and should be considered carefully by following works.